News
September 28, 2022 by The Associated Press 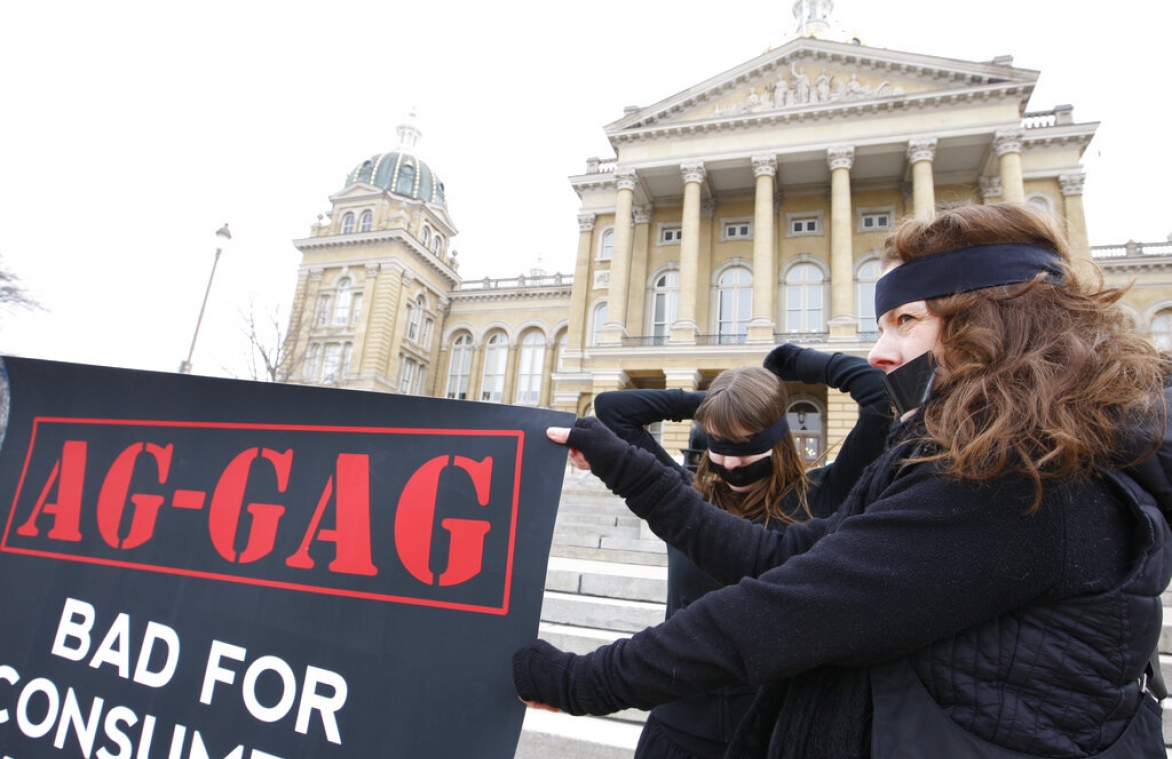 Subrey Zill, left, puts on a blindfold as Melinda Ellwanger holds a large sign with members of Mercy For Animals, a national animal advocacy group, as they protest the passage of an "ag gag" law at the Iowa state Capitol in Des Moines, March 1, 2012. Justin Hayworth/The Des Moines Register via AP, file

DES MOINES, Iowa (AP) — A federal judge has struck down the third attempt by the Iowa Legislature to stop animal-welfare groups from secretly filming livestock abuse, finding once again that the law passed last year violates free-speech rights in the U.S. Constitution.

The decision Sept. 26 rejected the law approved by Iowa lawmakers in April 2021 that makes it a crime to trespass on a property to place a camera to record or transmit images. The law, which had support from Republicans and some Democrats, made the first offense punishable by up to two years in prison and subsequent offenses a felony.

The case is one of many so-called ag-gag laws that have surfaced in the U.S. in recent years that pit the right of farmers to protect their property from trespassers against animal-welfare advocates. Farmers argue intruders could track in disease and want to unfairly portray their livestock practices, while animal-welfare groups say producers don't want the public to see how farm animals are treated.

The lawsuit was filed in federal court on Aug. 10, 2021, by animal-rights groups the Animal Legal Defense Fund, People for the Ethical Treatment of Animals and Bailing Out Benji. They were joined by environmental and grassroots advocacy groups Food & Water Watch and Iowa Citizens for Community Improvement.

It was the ninth lawsuit challenging ag-gag state laws around the country. In addition to the challenges to the three Iowa laws, earlier lawsuits have resulted in courts' striking down similar laws in North Carolina, Kansas, Idaho, Utah, and Wyoming. A challenge to the Arkansas law is currently pending in the district court. An appeal of a district court decision striking down North Carolina's law is pending in the 4th U.S. Circuit Court of Appeals, and an appeal of Iowa's second law is pending in the 8th U.S. Circuit.

Iowa lawmakers have been trying to pass such laws since 2012. Significant portions have been struck down by courts, while a few provisions that enhance the penalties for trespassing on farms and in meat-production facilities have survived.

Lawyers for the state of Iowa argued that because the 2021 law applies to speech on private property, the First Amendment's protections are significantly diminished. They said the interests of the farmer override any free-speech concerns of the animal-rights groups involved in criminal trespass.

Judge Stephanie Rose rejected that argument, saying other courts have noted that exempting private property from any First Amendment review could result in the criminalization of core free speech, such as criticism of a politician. She also said the U.S. Supreme Court has previously invalidated laws that regulate free speech on private property.

She rejected the state's motion to dismiss the lawsuit and granted the animal-rights groups motion to find the law unconstitutional and block its enforcement. She gave attorneys for both sides 30 days to draft language for a permanent injunction that would prevent the state from enforcing the law.

The advocacy groups said the decision is important to farm and food-processing plant workers placed in unsafe working conditions who are now protected under free-speech rights to record evidence, for advocates fighting to expose poor living conditions and treatment of dogs at breeding farms known as puppy mills, and for animals raised for food.

"The ability to investigate and document how our food is made is critical in ensuring a just and transparent food system that holds companies and government institutions accountable," said David Muraskin, the food-project litigation director for Public Justice, a Washington-based nonprofit law firm that represented grassroots advocacy group Iowa Citizens for Community Improvement in the lawsuit.

In a heavily agricultural state like Iowa, where farmers raise millions of pigs each year for meat and chickens for eggs, protecting a huge segment of the state's economy from negative publicity is a priority.

Farmers and sympathetic lawmakers say laws are needed to enforce the basic right for livestock producers to control who enters their property and barns. They say livestock farmers aren't hiding anything but don't trust the activists to accurately portray how animals are treated.

The state may appeal Rose's decision to the 8th U.S. Circuit. A spokesman for the Iowa attorney general's office, which represented the state, said they are still reviewing the decision.

A spokesman for Iowa Gov. Kim Reynolds did not immediately respond to a message seeking a comment.