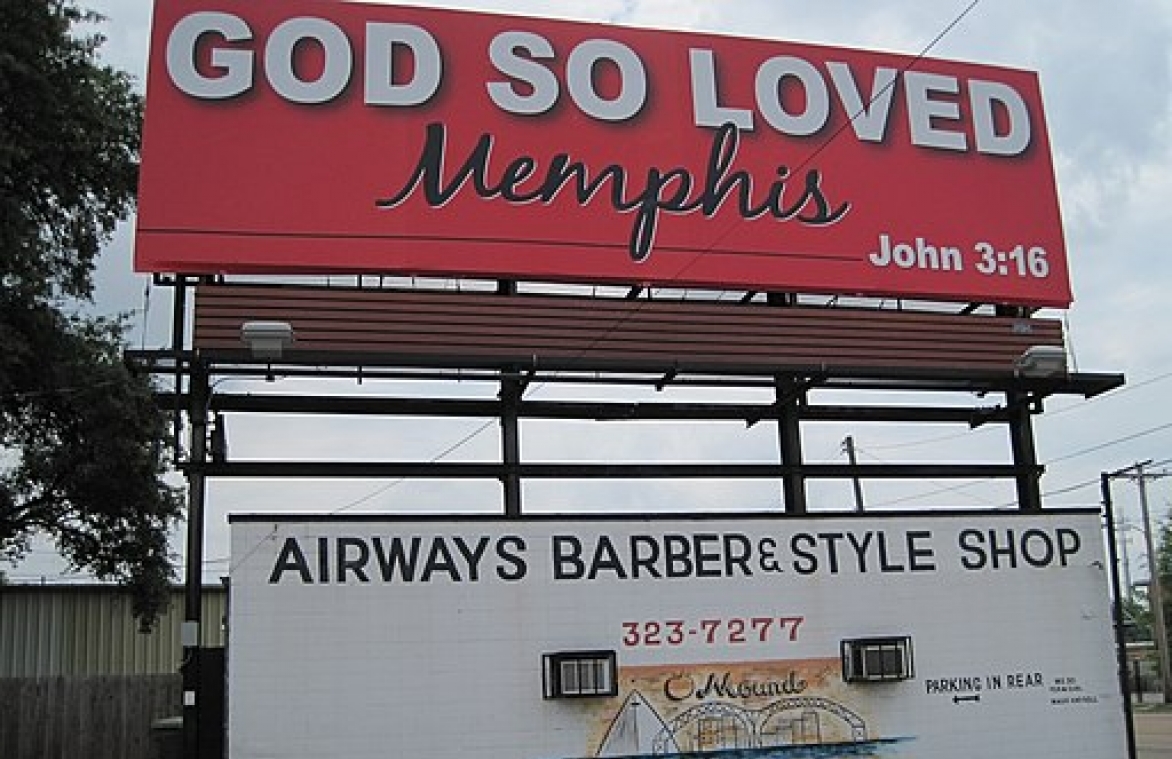 (A billboard in Memphis, via Wikimedia, by Thomas R Machnitzki, CC BY-SA 3.0)

The Tennessee Billboard Act and its selective treatment of on-premises signs violates the First Amendment, a federal appeals court panel has ruled.

Tennessee law requires permits for billboards in some locations, based on their content

However, the Tennessee Billboard law contains a so-called “on-premises” exception which allows such signs to be posted with a permit.  An “on-premises” sign is one that is located on the same premises as the activity or property advertised and the purpose of the sign is the identification of services or products at that very location.

William Harold Thomas Jr., the owner of many billboards, had been embroiled in litigation in Tennessee over whether he needed to obtain a permit for a billboard erected in a vacant lot.  For many years, Thomas had a commercial billboard on the lot even though he did not have a state permit.

In 2012, Thomas changed the billboard from a commercial message to a noncommercial one with a patriotic message in support of the 2012 U.S. Olympic Team.  The Tennessee Department of Transportation still maintained that Thomas needed a permit.

In 2013, Thomas sued in federal court, contending that the Billboard Act, and specifically its “on-premises” exception, unconstitutionally restricted his free-speech rights.   A federal district court agreed, reasoning that the only way to determine whether a sign was “on-premises” was to reference the content of the billboard.   The court also held that the law was not narrowly tailored to achieve the billboard’s law purposes.

On appeal, a three-judge panel of the Sixth U.S. Circuit Court of Appeals agreed in Thomas v. Bright.   Writing for the panel, Judge Alice Batchelder identified the billboard law as a “blanket, content-neutral prohibition on any and all signage except for speech that satisfies” the on-premises exception.

But, to Batchelder and her colleagues, this selective exception for certain speech, transformed the law into a content-based law subject to strict scrutiny — the highest form of judicial review.   “Clearly, this regulatory scheme requires Tennessee officials to assess the meaning and purpose of the sign’s message in order to determine if the sign violated the Act,” she explained.   “There is no way to make these decisions without understanding the content of the message.”

The Sixth Circuit relied heavily on the U.S. Supreme Court’s decision in Reed v. Town of Gilbert (2015) in which the High Court explained that a law can be content-based even the state did not have an insidious motivation to discriminate based on content.

The Sixth Circuit reiterated that “if the off-premises/on-premises distinction hinges on the content of the message, it is not a content-neutral message.”

The Sixth Circuit panel determined that public aesthetics was not a compelling governmental interest.  It then addressed the traffic safety rationale.   The panel reasoned that the state was not actually motivated by traffic safety when it passed the billboard law.

“By placing a burden more heavily on ideological than on commercial speech, the Billboard Act represents a peculiar inversion of First Amendment values,” the Sixth Circuit panel explained.