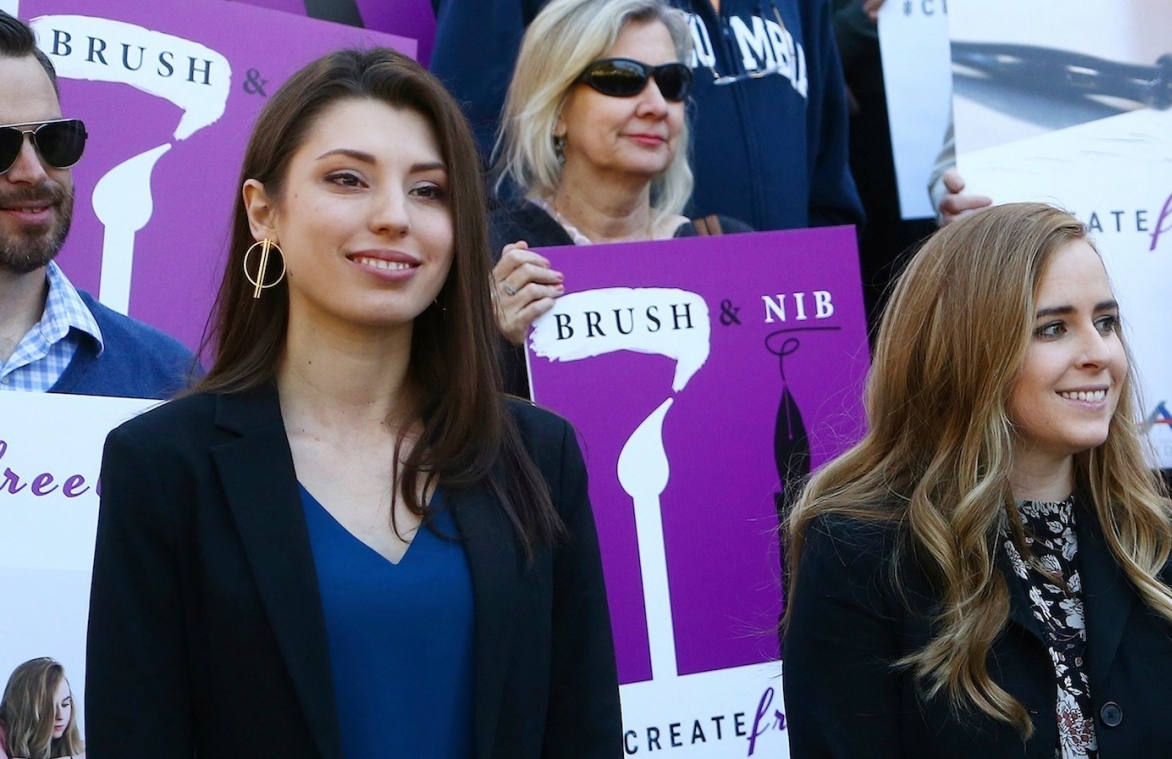 This Jan. 22, 2019, file photo shows Christian artists Joanna Duka, front left, and Breanna Koski, front right, outside the Arizona Supreme Court after justices heard arguments over Phoenix's anti-discrimination ordinance that bars businesses from refusing service to same-sex couples for religion reasons. Duka and Koski, who operate a business that makes invitations and other wedding-related items, had challenged the constitutionality of the ordinance. On Monday, Sept. 16, 2019, the state Supreme Court said the free-speech rights of Duka and Koski were violated by the ordinance. (AP Photo/Ross D. Franklin, used with permission from The Associated Press.)

The owners of a store that creates custom wedding invitations does not have to create such invitations for same-sex weddings, the Arizona Supreme Court has ruled.  Instead, the majority of the Arizona high court reasoned that the owners have free-expression and free-exercise-of-religion rights under the Arizona Constitution to refrain from doing so.

Breanna Koski and Joanna Duka operate an “art studio” company called Brush & Nib that specializes in creating custom artwork for weddings.  Brush & Nib’s operating agreement provides that it is a Christian-based and that the company “reserves the right to deny any request for action or artwork that violates its artistic and religious beliefs.”

The City of Phoenix prohibits places of public accommodation from discriminating against persons based on sexual orientation.  The city has never cited Koski and Duka for violating the ordinance.  However, Koski and Dudi filed an action in state court, seeking a declaratory judgment from the court that would declare the ordinance violates their right to free speech under article 2, section 6 of the Arizona Constitution and their free exercise of religion rights under the state’s Free Exercise of Religion Act.

The plaintiffs then appealed to the Arizona Supreme Court, which ruled in their favor in its Sept. 16, 2019, ruling in Brush & Nib Studios LLC v. City of Phoenix.

Court: Individual has autonomy over own speech, cannot be compelled to speak a message

The Arizona high court examined First Amendment jurisprudence involving the compelled-speech doctrine to resolve the case.  The U.S. Supreme Court created the compelled-speech doctrine in the famous flag-salute decision West Virginia Board of Education v. Barnette (1943).  In that decision, the Court ruled that public school officials could not force Jehovah's Witnesses students to salute the flag and recite the Pledge of Allegiance.

The Court in Barnette declared that the government cannot compel any person “to utter what is not in his mind,” and that all individuals have a sphere of personal liberty that the state cannot infringe.

Another line of the compelled-speech principle is that the government cannot force a person to host or accommodate another person’s message.  So, for example, in Hurley v. Irish-American Gay, Lesbian, & Bisexual Group of Boston (1995), the Supreme Court unanimously held that the city of Boston could not force private parade organizers to include or associate with a group they did not want to associate with.

“The fundamental principle underlying both lines of compelled-speech cases is that an individual has autonomy over his or her speech and thus may not be forced to speak a message he or she does not wish to say,” Justice Andrew Gould wrote for the majority.

Store owners said their invitations were a form of speech

However, before a party can prevail on a compelled-speech claim, she or he has to show that she or he engaged in speech. Koski and Duka contended that their custom wedding invitations are a form of pure speech, while the city countered that the invitations are not speech but are part of the plaintiffs’ discriminatory conduct.

Gould determined that “Plaintiffs’ custom wedding invitations, and the process of creating them, are protected by the First Amendment because they are pure speech.”  He noted that “[f]or each invitation, Duka and Koski spend many hours designing and painting custom paintings, writing words and phrases, and drawing images and calligraphy.”

Because Koski and Duka engage in pure speech, the Arizona high court majority applied strict scrutiny – the highest level of judicial review.  Under this standard, the city had the burden of showing that its ordinance advances a compelling governmental interest in a narrowly tailored way.

The majority reasoned that the ordinance generally served the compelling interest of ensuring equal access to persons, and that this general compelling interest “is not sufficiently overriding as to justify compelling Plaintiffs’ speech by commandeering their creation of custom wedding invitations, each of which expresses a celebratory message, as the means of eradicating society of biases.”

The majority also determined that the application of the city’s ordinance to plaintiffs’ business violated the plaintiffs’ right to the free exercise of religion under the state’s Free Exercise of Religion Act. Under this state law, a party asserting free-exercise rights must show their action was motivated by a religious belief; the religious belief is sincerely held; and the government’s regulation substantially burdens their free-exercise rights.

If the person meets these criteria, the burden shifts under the law to the government to show that its law furthers a compelling governmental interest advanced by the least-restrictive means.

Here, the plaintiffs easily could show that their actions were motivated by sincere religious beliefs. Thus, the key initial question was whether they could show a substantial burden on such beliefs. The majority found a substantial burden, writing that “the coercion the Ordinance places on Plaintiffs to abandon their religious belief is unmistakable.”

The majority then determined that the city could not meet strict scrutiny.  It noted that the ordinance did not advance its interests in the least-restrictive way, as the city could have granted a narrow exemption to the plaintiffs.

The majority concluded that “the Ordinance, as applied to Plaintiffs’ custom wedding invitations, and the creation of those invitations, unconstitutionally compels speech in violation of the Arizona Constitution’s free speech clause” and “violates Plaintiffs’ free exercise of religion.”

“One would think – indeed fervently hope – that we are long past the notion that businesses operating as public accommodations have a ‘right’ to tell certain customers that they do not serve their kind and so they should take their patronage elsewhere,” he wrote.