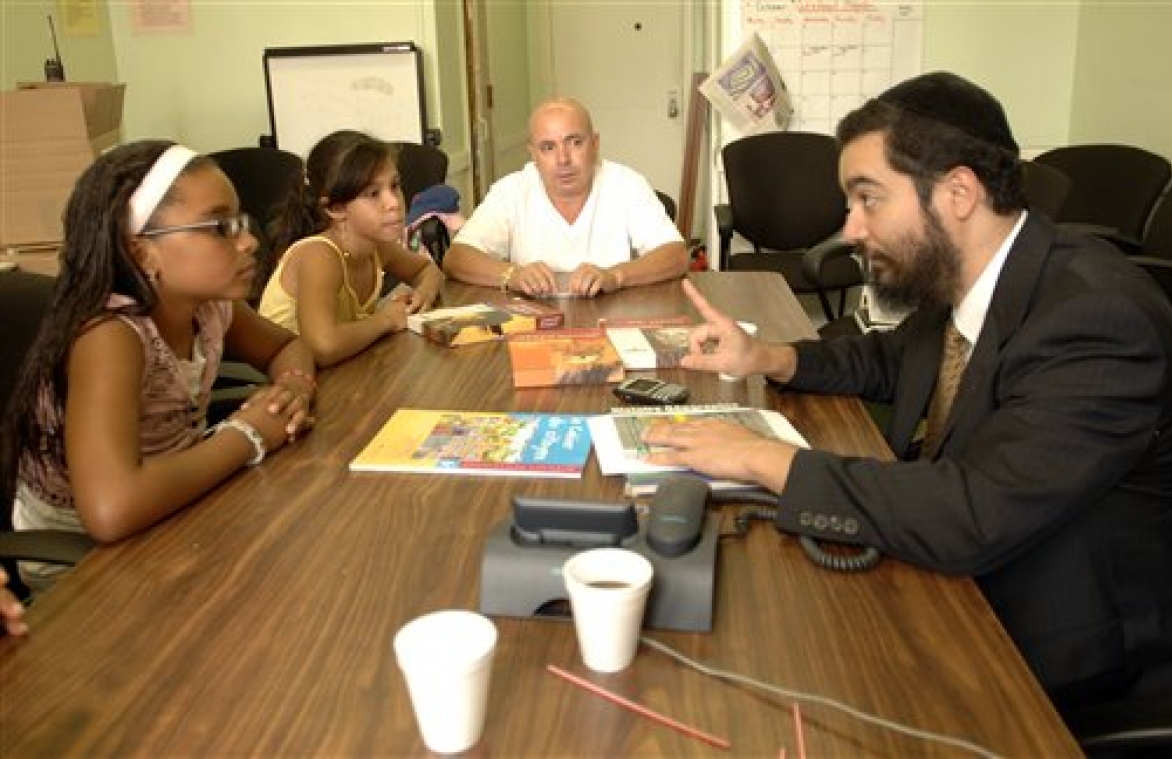 Shimon Waronker was put on administrative leave from his job as superintendent of Hempstead Union Free School District in New York after he sent a letter to the school board about possible unlawful activity and wrote an open letter to the Hempstead community, urging them to help him root out corruption and self-interest. He claimed that the school board had retaliated against him, but a 2nd U.S. Circuit Court of Appeals panel In Oct 2019 affirmed a lower court ruling that Waronker's communications were undertaken as part of his superintendent duties and he could not claim free speech in asserting a retaliation claim. (In this 2007 photo, Waronker is shown on the right talking to a student when he was principal of a middle school in the Bronx.)

A former New York public school superintendent spoke pursuant to his job duties and, thus, did not have any First Amendment protections from retaliation, a federal appeals court panel has ruled.

The decision shows the continued power of the U.S. Supreme Court’s decision in Garcetti v. Ceballos (2006), which held that public employees have no First Amendment free-speech rights when they speak pursuant to their official job duties.

In 2017, Dr. Shimon Waronker was hired as Superintendent for the Hempstead Union Free School District, a district that apparently had been plagued with academic and financial problems.   Waronker began reform efforts, which included hiring some special investigators to uncover financial mismanagement.

School board suspends superintendent after his open letter to community

Resistance to these reform efforts ensued and the Board fired the special investigators.  In response, Waronker sent an e-mail to the Board advising that he had consulted with several law enforcement agencies about possible unlawful activity.   Three weeks after this e-mail, the Board suspended Waronker as Superintendent.

This prompted Waronker to send an open letter to the Hempstead community, urging members of the community to help him root out corruption and self-interest.   Four days later, the Board placed him on administrative leave.

Waronker sued in January 2018, alleging a violation of his rights to free speech and due process.   A federal district court dismissed his claims.  Waronker claimed that the Board retaliated against him because of his e-mail, his open letter, and communications with law enforcement agencies.

On appeal, a three-judge panel of the 2nd U.S. Circuit Court of Appeals affirmed in Waronker v. Hempstead Union Free School District.  In its October 17, 2019, decision, the panel relied extensively on Garcetti, finding that Waronker engaged in official, job duty speech when he sent his e-mail, wrote his open letter, and contacted outside agencies.

The appeals court panel reasoned that rooting out corruption and mismanagement were part of the core duties of a school superintendent.   The panel also noted that Waronker signed his e-mail using his official job title as superintendent and that he sent his open letter to the school community on the school district’s website.

As for the communications with law enforcement, the panel determined that those communications also were undertaken in the performance of Waronker’s duties as superintendent.

Waronker attempted to rely on the U.S. Supreme Court’s later decision in Lane v. Franks (2014), in which the Court held that a public employee’s truthful, in-court testimony was a form of protected speech.   However, the panel contrasted Waronker’s speech by writing that he “did not bear an obligation as a private citizen to communicate with law enforcement about the School District’s corruption and mismanagement.”

The panel’s decision in Waronker shows that Garcetti remains a formidable hurdle for many public employees asserting retaliation claims.  These employees are often Garcettized.