Justices spar in latest clash of religion and gay rights

News
December 6, 2022 by The Associated Press 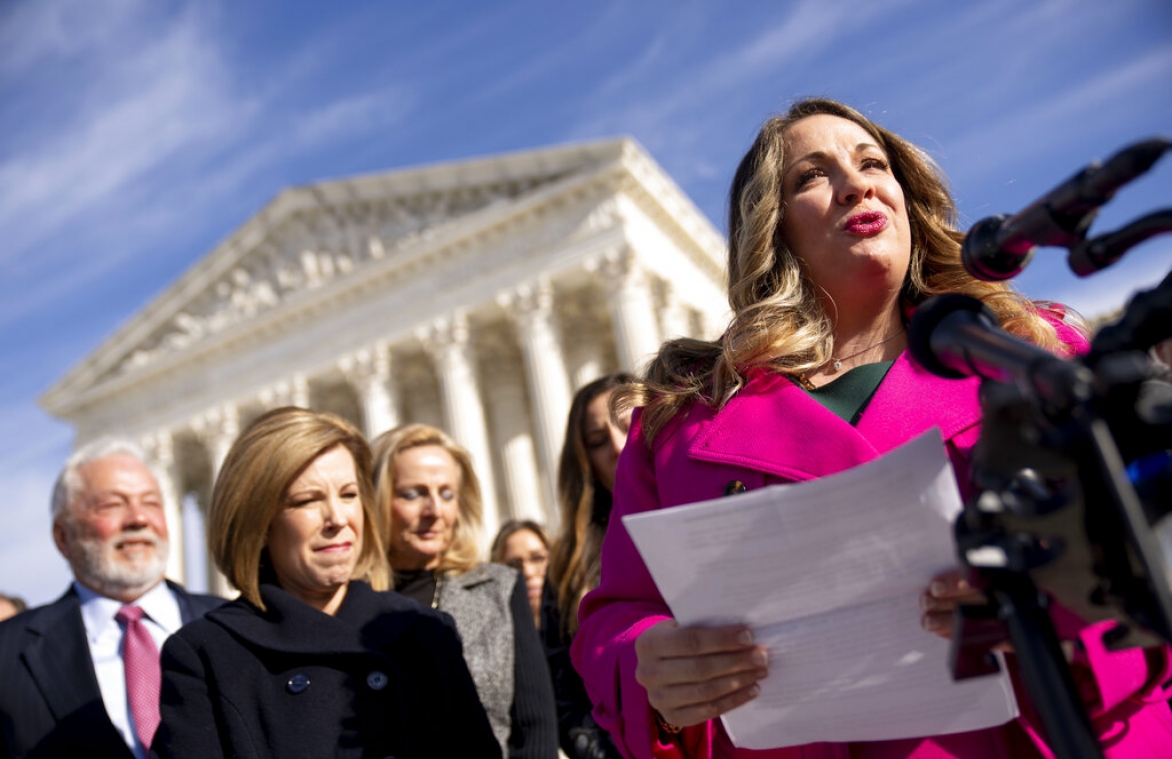 Lorie Smith, a Christian graphic artist and website designer in Colorado, right, accompanied by her lawyer, Kristen Waggoner of the Alliance Defending Freedom, second from left, speaks outside the Supreme Court in Washington, D.C., Monday, Dec. 5, 2022, after her case was heard before the Supreme Court. AP Photo/Andrew Harnik

WASHINGTON (AP) — The Supreme Court 's conservative majority sounded sympathetic on Dec. 5 to a Christian graphic artist who objects to designing wedding websites for gay couples, the latest collision of religion and gay rights to land at the high court.

The designer and her supporters say that ruling against her would force artists — from painters and photographers to writers and musicians — to do work that is against their beliefs. Her opponents, meanwhile, say that if she wins, a range of businesses will be able to discriminate, refusing to serve black, Jewish or Muslim customers, interracial or interfaith couples or immigrants.

Over more than two hours of spirited arguments, the justices repeatedly tested out what ruling for the designer could mean, using detailed and sometimes colorful hypothetical scenarios. Those included a black Santa asked to take a picture with a child dressed in a Ku Klux Klan outfit, a photographer asked to take pictures for the marital-infidelity website Ashley Madison, and an invented food business called "Grandma Helen's Protestant Provisions."

The case comes at a time when the Court is dominated 6-3 by conservatives and follows a series of cases in which the justices have sided with religious plaintiffs. Across the street from the Court, meanwhile, lawmakers in Congress are finalizing what would be a landmark bill protecting same-sex marriage, legislation prompted by a different high court case from earlier this year.

During arguments Monday the Court's three liberal justices expressed concerns about ruling for website designer and graphic artist Lorie Smith, while conservatives suggested support for her.

Justice Neil Gorsuch, one of three high court appointees of former President Donald Trump, described Smith as "an individual who says she will sell and does sell to everyone, all manner of websites, (but) that she won't sell a website that requires her to express a view about marriage that she finds offensive."

Smith, who is based in Colorado, doesn't currently create wedding websites. She wants to, but says her Christian faith prevents her from creating websites celebrating same-sex marriages.

Colorado, like most other states, has what's called a public-accommodation law that says if Smith offers wedding websites to the public, she must provide them to all customers. Businesses that violate the law can be fined, among other things.

A looming question during Monday's arguments: At what point does an objection to serving someone cross the legal line?

Justice Ketanji Brown Jackson, one of the Court's three liberals, asked whether a photography store in a shopping mall could refuse to take pictures of black people on Santa's lap.

"Their policy is that only white children can be photographed with Santa in this way, because that's how they view the scenes with Santa that they're trying to depict," said Jackson, one of the Court's two black justices.

Jackson's fellow liberal Justice Sonia Sotomayor said if the Supreme Court rules for Smith, it would be the first time the justices would say that a "commercial business open to the public, serving the public, that it could refuse to serve a customer based on race, sex, religion or sexual orientation."

Alito was also the justice who asked whether a black person dressed as Santa would be required to take a picture with a child dressed in a Ku Klux Klan outfit. Eric Olson, arguing on behalf of Colorado, responded "No," because Ku Klux Klan outfits wouldn't be protected under public-accommodation laws.

Justice Elena Kagan added that Olson's response wasn't based on the race of the child wearing the outfit. In an awkward moment, Alito responded: "You do see a lot of black children in Ku Klux Klan outfits, right? ... All the time."

The case is the second in which the Court has wrestled with a case involving a Christian business owner who doesn't want to provide a service for a same-sex wedding. Five years ago, the justices heard a different challenge involving Colorado's law and a baker, Jack Phillips, who objected to designing a wedding cake for a gay couple. That case ended with a limited decision and set up a return of the issue to the high court. Smith's lawyer, Kristen Waggoner of the Alliance Defending Freedom, also represented Phillips.

White House press secretary Karine Jean-Pierre declined to weigh in on the case specifically following oral arguments Monday but said the "administration believes that every person, no matter their sex, race, religion or who they love, should have an equal access to society."

The White House is currently awaiting final passage in Congress of the bill protecting same-sex and interracial marriage. It gained momentum following the Supreme Court's decision earlier this year to end constitutional protections for abortion. That decision to overturn the 1973 Roe v. Wade ruling prompted questions about whether the Court — now that it is more conservative — might also overturn its decision declaring a nationwide right to same-sex marriage. Justice Clarence Thomas explicitly said that decision, Obergefell v. Hodges, should be reconsidered.

During arguments at the Court Monday, Justice Brett Kavanaugh asked Waggoner, Smith's lawyer, about what would happen if the Court sided with her. And he pointed to a section of her written submission to the high court where she said Smith as an artist is different from other business people including hairstylists, landscapers, plumbers, caterers, tailors, jewelers and restaurants that do not generally communicate a message through their work.

If she wins, Waggoner said, she might bring similar cases on behalf of others whose work involves creative inspiration. But, she said, "I won't be coming back with a caterer."