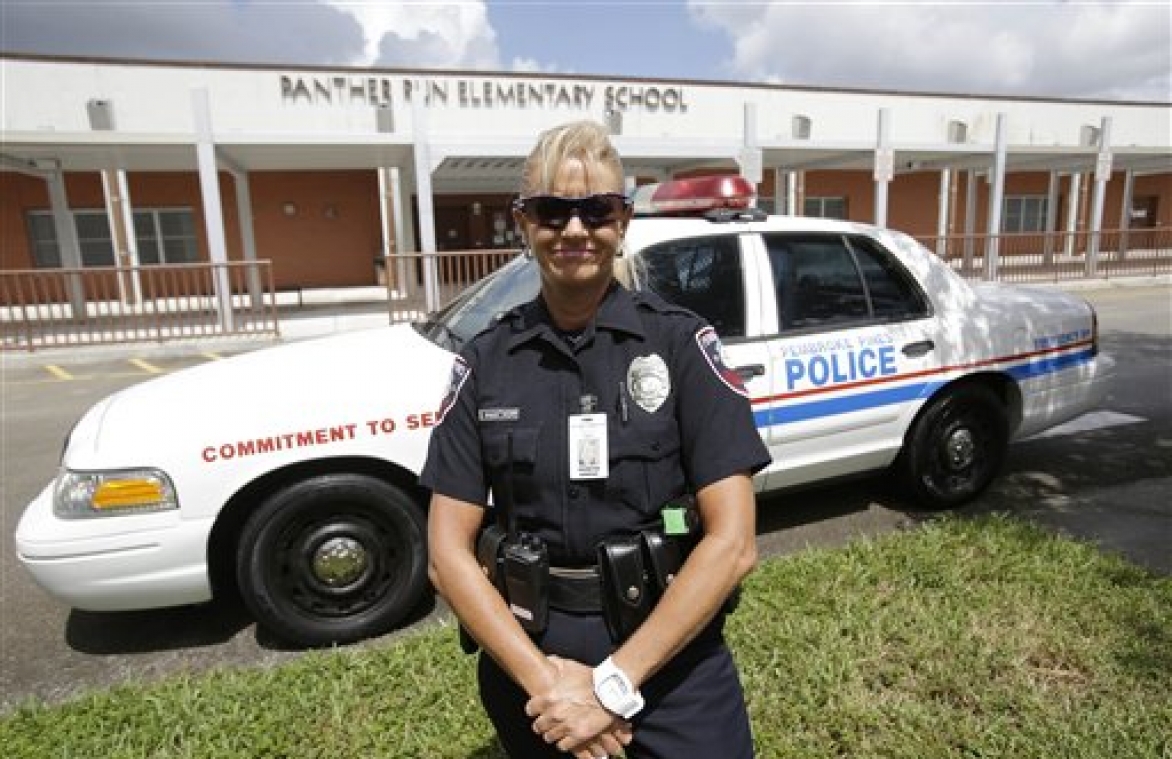 A court of appeals rejected a Florida juvenile's claim that a state law prohibiting knowing disruptions of schools was overly broad or vague. The juvenile's comments on a YouTube video about shooting up his Florida middle school a few days after the Parkland, Fla., school shooting led school security to evacuate students and pat down all their backpacks. (In this photo, a school resource officer greets students at a Florida school in 2003 after the Sandy Hook Elementary School shootings as part of increased security at schools, AP Photo by Wilfredo Lee, used with permission from The Associated Press.)

A Florida law that prohibits the knowing disruption of school activities applies to off-campus student conduct, a state appeals court has ruled.

The Florida appeals court also rejected constitutional challenges filed by a student found delinquent that the law was too vague and too broad.   Instead, the court found that the law provided fair notice and was not overbroad.

The case arose a couple of days after the mass school shooting at Marjory Stoneman Douglas High School in Parkland, Fla. Law enforcement saw online comments to a YouTube video about the shooting that said: “I’m going to shoot my school in Florida. I’m only 13. I got bullied and I’m getting revenge with my guns. The school is Miami Lakes Middle School.”

The comments led to school officials' evacuating students and patting down all student backpacks. It also caused the school to have additional security personnel on campus and led to classes starting late.

Law enforcement requested information from Google and Comcast, eventually identifying the student (known in court papers as “O.P.-G.”) who made the comments. Authorities charged him with violating the following Florida law:

It is unlawful for any person:

Knowingly to disrupt or interfere with the lawful administration or functions of any educational institution, school board, or activity on school board property in this state.

Ultimately, the trial judge found that O.P.-G.. was delinquent (a term in juvenile law approximate to guilty). On appeal, the Court of Appeal of Florida, 3rd District, affirmed the finding of delinquency in its Oct. 16, 2019, decision in O.P.-G v. State.

The Florida appeals court first noted that the law on its face did not limit its coverage to only conduct that takes place on campus.   It also noted that the U.S. Supreme Court in its seminal student-speech decision Tinker v. Des Moines Independent Community School District  (1969) wrote that “conduct by the student, in class or out of it, which for any reason … materially disrupts classwork or involves substantial disorder … is not immunized by the constitutional guarantee of freedom of speech.”

The Florida appeals court explained that “we decline to undermine the legislative intent by importing an unpenned element into the analysis.”

The court also rejected O.P.-G.’s vagueness and overbreadth challenges.   The appeals court explained that the law was not vague because it provided “fair notice” of what type of conduct was proscribed.   Finally, the court also explained that the law was not too broad because it “limits any punishment for speech to that which causes a disruption to the school functions.”