Perspective
January 20, 2023 by The Associated Press 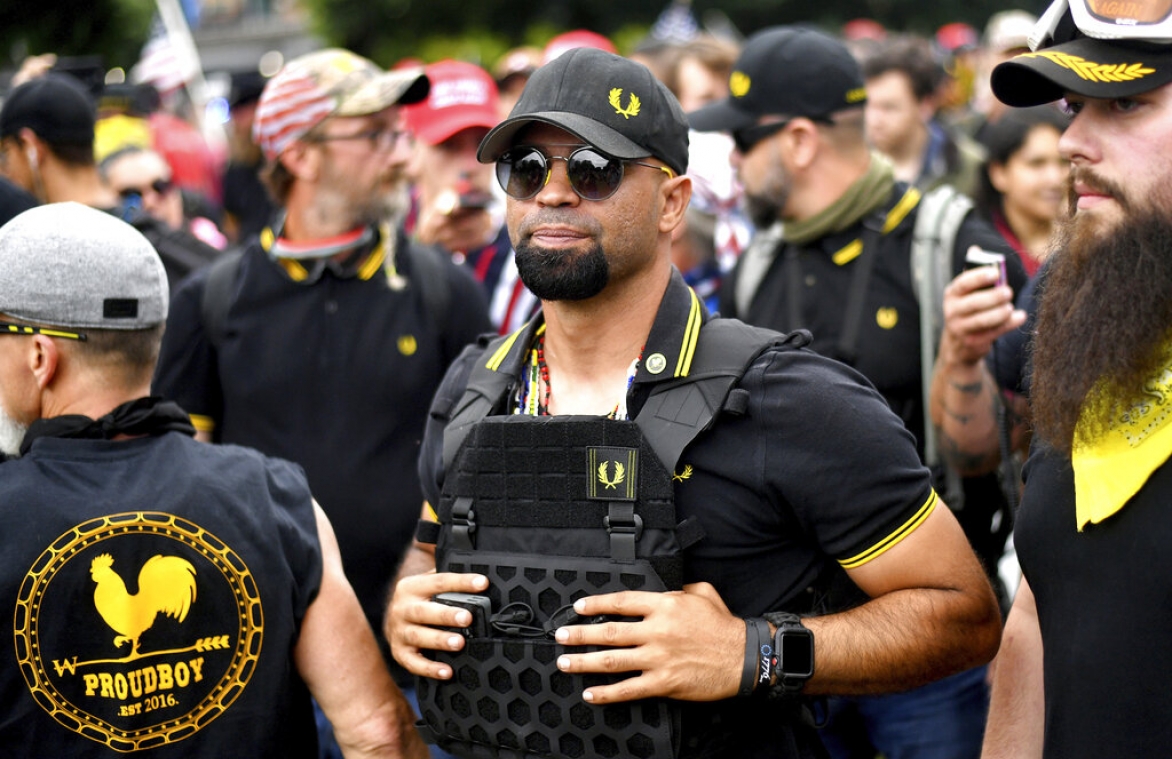 WASHINGTON (AP) — The former Proud Boys national chairman is standing trial on the most serious charge that has been lodged in the U.S. Capitol attack. That's seditious conspiracy, which is the same offense that two Oath Keepers leaders were convicted of weeks ago.

It's the third such trial in the massive prosecution of the Jan. 6, 2021, riot that forced Congress to adjourn as lawmakers and staff hid from a violent mob. Opening statements began on Jan. 19, and the trial is expected to last at least six weeks.

Prosecutors in the case against former Proud Boys leader Enrique Tarrio and four lieutenants will try to prove that the extremist group plotted for weeks to use force to keep then-President Donald Trump in power. Tarrio wasn't in Washington on Jan. 6 — he was arrested in a separate case two days earlier — but authorities say he helped put into motion the violence and cheered on the riot from afar as it unfolded.

"On Jan. 6, they took aim at the heart of our democracy," Assistant U.S. Attorney Jason McCullough told jurors on Jan. 19.

Defense attorneys say there was no plot to storm the Capitol or block Congress' certification of President Joe Biden's victory. The defense will try to make the case that the actions of the Proud Boys who joined the pro-Trump mob were spontaneous rather than the culmination of a premeditated plot.

Tarrio, who's from Miami, is standing trial with Ethan Nordean of Auburn, Wash., who was a Proud Boys chapter president; Joseph Biggs of Ormond Beach, Fla., a self-described Proud Boys organizer; Zachary Rehl, president of the Proud Boys chapter in Philadelphia, and Dominic Pezzola, a Proud Boysmember from Rochester, N.Y. Prosecutors say Pezzola allowed the first rioters to enter the Capitol by using a police riot shield to shatter a window.

Here's a look at the charge of seditious conspiracy and its history:

What is seditious conspiracy?

The seditious-conspiracy law was enacted after the Civil War to arrest Southerners who might keep fighting the U.S. government. Sedition cases have been rare in recent history. The charge can be difficult to prove, especially in cases when an alleged plot is unsuccessful.

In order to win a seditious-conspiracy case, prosecutors have to prove that two or more people conspired to "overthrow, put down or to destroy by force" the U.S. government or bring war against it, or that they plotted to use force to oppose the authority of the government or to block the execution of a law.

Tarrio and his co-defendants are accused of conspiring to block the transfer of power from Trump to Biden. The indictment alleges that they conspired to forcibly oppose the authority of the federal government and to use force to prevent the execution of laws having to do with the transfer of power.

It's not enough to merely show the defendants advocated the use of force — prosecutors must show they conspired to use force. Conviction calls for up 20 years in prison.

Who has faced similar charges in the Jan. 6 attack?

Another three Oath Keepers have pleaded guilty to seditious conspiracy, and agreed to cooperate with prosecutors in hopes getting lighter sentences.

Jeremy Joseph Bertino, a former Proud Boys leader from North Carolina, was the first member of that extremist group to plead guilty to seditious conspiracy in October. Bertino could take the witness stand to testify against Tarrio and the others.

A statement of offense filed in court says that Bertino understood the Proud Boys' goal in traveling to Washington was to stop the certification of Biden and that the group was prepared to use force and violence.

WHAT about past cases?

The convictions of Oath Keepers Rhodes and Meggs were the first seditious-conspiracy guilty verdicts in decades.

Before that trial, the last time the Justice Department tried such a case was in 2010 in an alleged Michigan plot by members of the Hutaree militia to incite an uprising against the government.

A judge ordered acquittals of the seditious-conspiracy charges at a 2012 trial, saying prosecutors relied too much on hateful diatribes protected by the First Amendment and didn't, as required, prove the accused ever had detailed plans for a rebellion.

Lawyer William Swor, who represented Hutaree militia leader David Stone, has said that prosecutors in the case failed to prove that group members were "more than just talking" and were "actively planning to oppose the government."

The judge said Stone's "diatribes evince nothing more than his own hatred for — perhaps even desire to fight or kill — law enforcement; this is not the same as seditious conspiracy."

Before the Oath keepers case, the last successful prosecution in a seditious conspiracy trial was in 1995, when Egyptian cleric Sheikh Omar Abdel-Rahman and nine followers were convicted in a plot to blow up the United Nations, an FBI building, and two tunnels and a bridge linking New York and New Jersey.

Abdel-Rahman, known as the "blind sheikh," argued on appeal that he was never involved in planning actual attacks and his hostile rhetoric was protected free speech. He died in federal prison in 2017.

More recently, Oscar Lopez Rivera, a former leader of a Puerto Rican independence group that orchestrated a bombing campaign that left dozens of people dead or maimed in New York, Chicago, Washington and Puerto Rico in the 1970s and early 1980s, spent 35 years in prison for seditious conspiracy before President Barack Obama commuted his sentence in 2017.

In 1988, jurors in Fort Smith, Ark., acquitted white supremacists charged with seditious conspiracy. The defendants were accused of plotting to overthrow the federal government and establish an all-white nation in the Pacific Northwest, and conspiring to kill a federal judge and FBI agent.