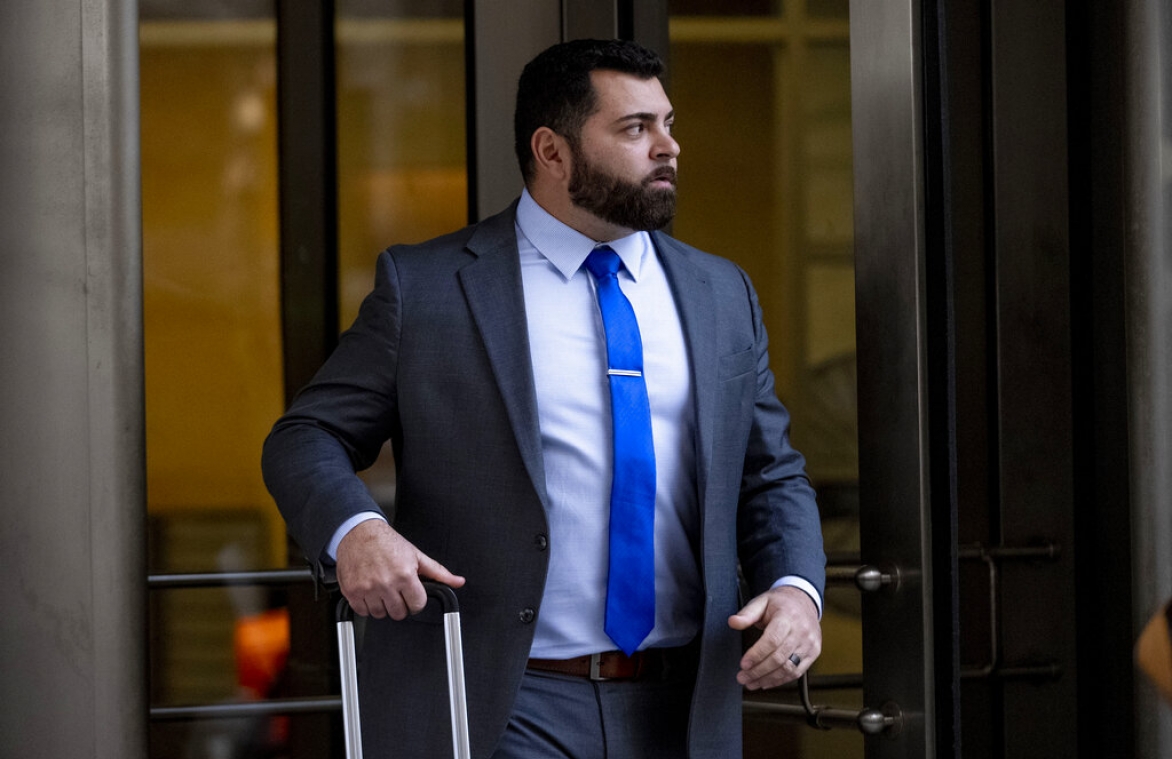 Roberto Minuta of Prosper, Texas, leaves federal court in Washington, D.C., Jan. 23, 2023, after he and three other members of the Oath Keepers were convicted of seditious conspiracy in the Jan. 6, 2021, U.S. Capitol attack. AP Photo/Andrew Harnik

WASHINGTON, D.C. (AP) — Four members of the Oath Keepers were convicted Jan. 23 of seditious conspiracy in the Jan. 6, 2021, Capitol attack in the second major trial of far-right extremists accused of plotting to forcibly keep President Donald Trump in power.

The verdict against Joseph Hackett of Sarasota, Fla.; Roberto Minuta of Prosper, Texas; David Moerschel of Punta Gorda, Fla.; and Edward Vallejo of Phoenix comes weeks after after a different jury convicted the group's leader, Stewart Rhodes, in the mob's attack that delayed the certification of President Joe Biden's electoral victory.

It's another major victory for the Justice Department, which is also trying to secure sedition convictions against the former leader of the Proud Boys and four associates. The trial against Enrique Tarrio and his lieutenants opened earlier this month in Washington and is expected to last several weeks.

The Washington jury deliberated for about 12 hours over three days before delivering their guilty verdict on the rarely used charge, which carries up to 20 years in prison. The four were also convicted of two other conspiracy charges as well as obstructing an official proceeding: Congress' certification of the 2020 election. Minuta, Hackett and Moerschel were acquitted of lesser charges.

The judge didn't immediately set a date for sentencing. The judge denied prosecutors' bid to lock up the men while they await sentencing, finding them not to be a flight risk. They were ordered to remain in home detention with electronic monitoring.

It was one of the most serious cases brought so far in the sweeping Jan. 6 investigation, which continues to grow two years after the riot. The Justice Department has charged nearly 1,000 people in the riot and the tally increases by the week.

Attorney General Merrick Garland told reporters after the verdict that he was "grateful to the prosecutors, agents and staff for their outstanding work."

Oath Keepers leader Rhodes and Florida chapter leader Kelly Meggs were convicted of seditious conspiracy in the previous trial that ended in November. They were the first people in decades found guilty at trial of the Civil War-era charge. Three other Oath Keepers were cleared of the charge in that case but were found guilty of other serious crimes. They are all awaiting sentencing.

Lawyers for Moerschel and Minuta suggested after the verdict that their clients were hurt by not being able to stand trial alongside Rhodes because the judge split the case into two groups. Moerchel's lawyer, Scott Weinberg, said he could have pointed to Rhodes as the "real bad guy."

"I think it would be easier to be a low-level person in the same case as Stewart Rhodes, who is basically the figurehead of of this organization," Weinberg said.

William Shipley Jr., Minuta's attorney, said he was disappointed and "somewhat puzzled" by the verdict. He said the government's witnesses didn't stand up to scrutiny and there were gaps in the evidence presented.

"We didn't really think that in the 15 days of trial testimony the government really had a good day," Shipley said.

Vallejo left the courthouse without speaking to reporters. Joseph Hackett's attorney, Angela Halim, declined to comment after the verdict.

Prosecutors told jurors that Rhodes and his band of extremists began shortly after the 2020 election to prepare an armed rebellion to keep Trump in power. Messages show Rhodes and the Oath Keepers discussing the prospect of a "bloody" civil war and the need to keep Biden out of the White House.

"Our democracy was under attack, but for the defendants it was everything they trained for and a moment to celebrate," prosecutor Louis Manzo told jurors in his closing argument.

Prosecutors alleged that the Oath Keepers amassed weapons and stashed them at a Virginia hotel for so-called "quick reaction force" teams that could quickly shuttle guns into Washington to support their plot if they were needed. The weapons were never used.

Defense attorneys sought to downplay violent messages as mere bluster and said the Oath Keepers came to Washington to provide security at events before the riot. They seized on prosecutors' lack of evidence that the Oath Keepers had an explicit plan to storm the Capitol before Jan. 6 and told jurors that the extremists who attacked the Capitol acted spontaneously like thousands of other rioters.

Prosecutors argued that while there was no evidence specifically spelling out a plan to attack the Capitol, the Oath Keepers saw the riot as a means to an end and sprang into action at an apparent opportunity to help keep Trump in power.

Hackett, Moerschel and other Oath Keepers approached the Capitol in a military-style stack formation before they entered the building, according to prosecutors. Minuta and his group from a second stack of Oath Keepers clashed with police after heeding Rhodes' call to race to the Capitol, according to court documents.

Prosecutors said that Vallejo, a U.S. Army veteran and Rhodes ally, drove from Arizona to prepare with the "QRF" — the quick reaction force — at the hotel outside Washington. Jurors heard an audio recording of Vallejo talking about a "declaration of a guerilla war" on the morning of Jan. 6.