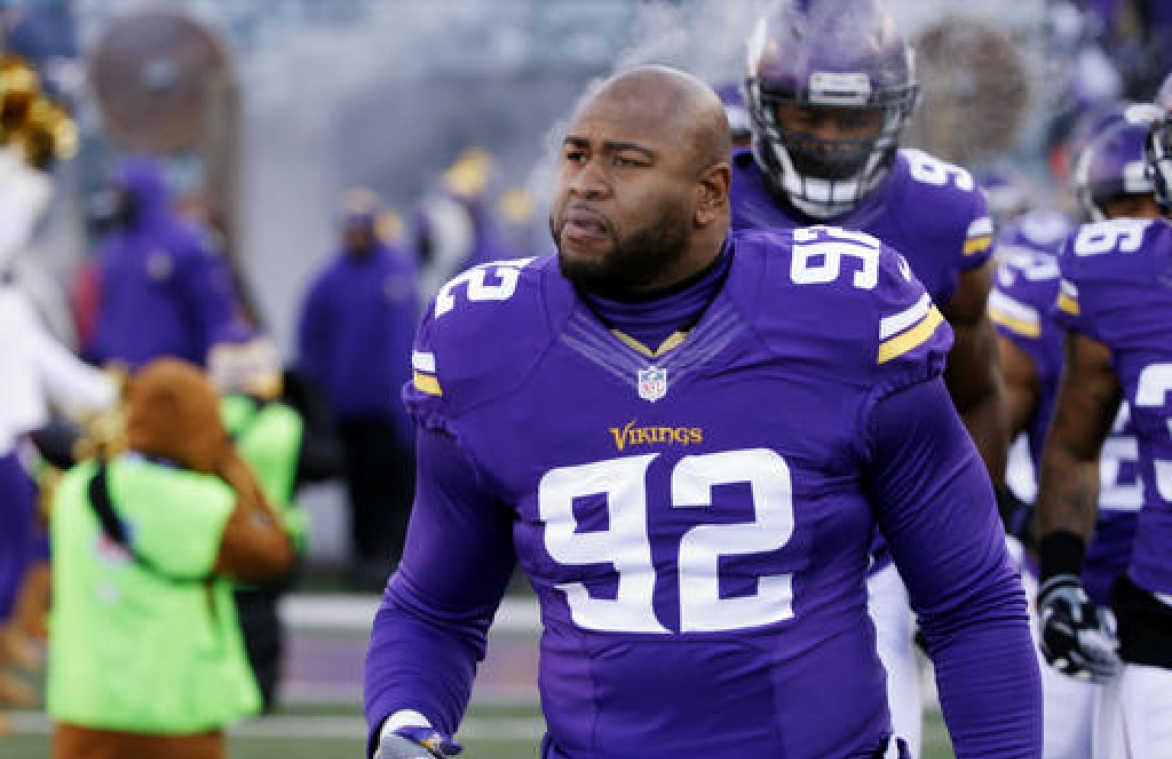 In this Jan. 10, 2016, file photo, Minnesota Vikings defensive tackle Tom Johnson is introduced before an NFL football game against the Seattle Seahawks in Minneapolis. Johnson is suing Minneapolis and two police officers, accusing them of violating his civil rights by using a chemical spray and stun gun on him during a 2014 incident at a downtown nightclub after he started filming them with his cell phone. On Nov. 1, 2019, a panel of the 8th U.S. Circuit Court of appeals rejected his First Amendment retaliation claim, but allowed his excessive force claim to proceed. (AP Photo/Jim Mone, used with permission from The Associated Press.)

Former NFL defensive tackle Tom Johnson can continue with his Fourth Amendment claim for excessive force against a police officer who shot him with a Taser stun gun but not his First Amendment retaliation claim, a divided federal appeals court has ruled.

The incident arose in October 2014 at Minneapolis nightclub “Seven.”   At 2 a.m. Johnson was waiting in the lobby for his car which he had valet parked.   A security doorman approached Johnson and told him that he needed to leave the nightclub’s lobby, because his boots violated the club’s dress code.   Johnson contended that he should  be allowed to remain in the lobby until he got his vehicle.

The security guard then told Patrick McCarver, an off-duty police officer who also worked security at the club, that Johnson refused to leave the lobby.  McCarver and another officer, John LaLuzerne, also told Johnson that he needed to leave.  Eventually, McCarver nudged Johnson outside of the club and pepper sprayed him.

When the off-duty police officers left the club, Johnson took his cell phone and began to film the officers.  McCarver then shot Johnson with a Taser stun gun and the officers charged Johnson with trespass, disorderly conduct, and obstructing legal process.

After a week-long trial, a jury acquitted Johnson of all charges.

Johnson then filed a civil rights lawsuit against the police officers, alleging a First Amendment retaliation claim, a Fourth Amendment excessive force claim, and a due process claim.   The police officers pled qualified immunity, a doctrine that protects government officials from liability unless they violated clearly established constitutional rights.

A federal district court denied the defendants’ motion for qualified immunity.  On appeal, a divided three-judge panel of the 8th U.S. Circuit Court of Appeals partly affirmed and partly reversed the lower court in its November 1, 2019, opinion in Johnson v. McCarver.

The 8th Circuit panel majority ruled that the officers were entitled to qualified immunity on Johnson’s First Amendment retaliation claim, because the officers had at least arguable probable cause to arrest Johnson for trespass since he would not immediately leave the lobby of the club.   Probable cause almost always negates a First Amendment retaliation claim.

“Even if Johnson initially had a right to wait in the lobby, a reasonable officer could have believed that Webster [the security guard] or the officers themselves revoked that right by directing Johnson to leave,” Judge Steven Colloton wrote for the majority.

One judge on the panel, Judge Jane L. Kelly, wrote a dissenting opinion.  She ruled that the officers also should be denied qualified immunity on Johnson’s First Amendment retaliation claim.

“Viewing the record in the light most favorable to Johnson, the officers lacked arguable probable cause to arrest him for trespass,” she wrote.  “A reasonable officer would understand that Johnson was no different than any other person waiting in the lobby for the valet to bring around their car.”