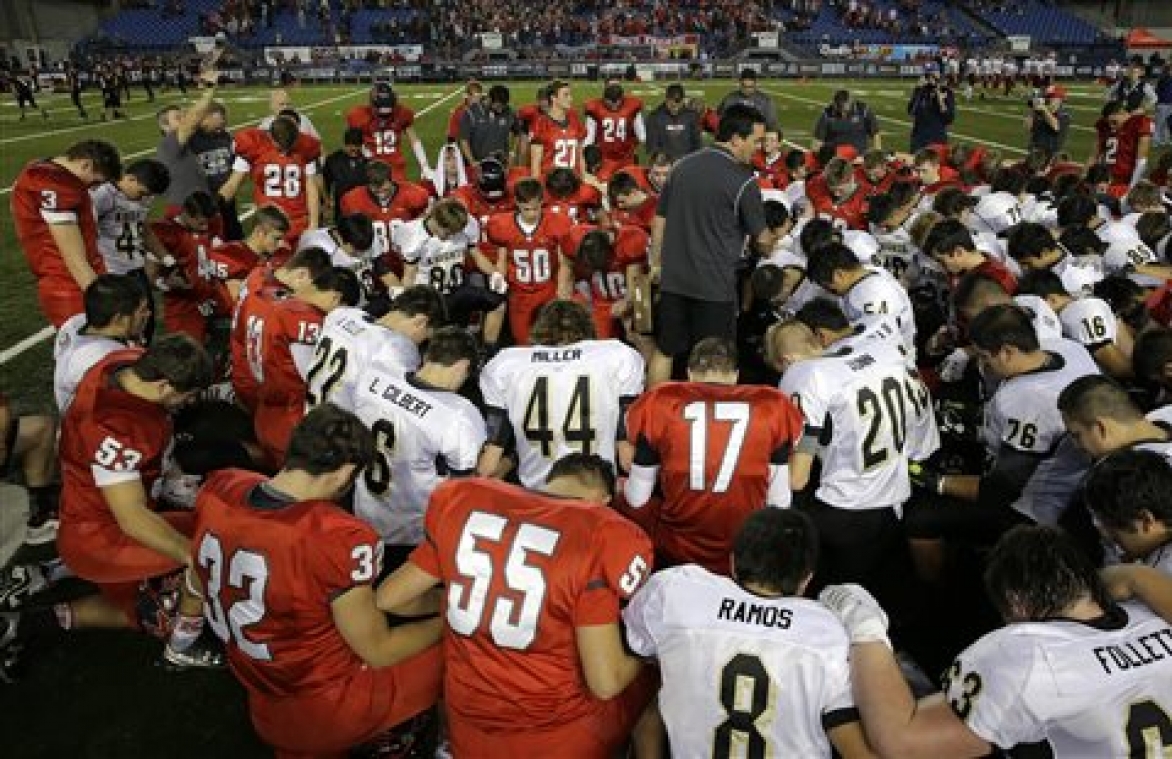 File image from The Associated Press, showing high school football players in Washington kneeling in prayer after a game in 2015. Used with permission from The Associated Press as an illustration of prayer. In a lawsuit against the Florida High School Athletic Association, Cambridge Christian School alleged its First Amendment rights were violated in 2015 when the sports association denied its request to lead the audience at a football game in prayer over the loudspeaker before a playoff game. A panel of the 11th Circuit Court of Appeals reinstated its claims, saying a lower court too quickly dismissed the claims of free speech and free exercise of religion.

A Christian school in Florida denied the ability to have prayer over the loudspeaker before a football game had its First Amendment lawsuit reinstated by a federal appeals court.   The appeals court reasoned that the lower court was “too quick to pull the trigger” and dismiss the lawsuit.

At the end of the 2015 football season, Cambridge Christian School, a Tampa-based private school, faced University Christian School in the playoffs.  The schools submitted a joint request to the Florida High School Athletic Association (FHSAA) for permission to conduct a joint prayer over the loudspeaker before the football game.

The FHSAA denied the request, citing concerns over the Establishment Clause of the First Amendment, which provides for a degree of separation between church and state.   The FHSAA relied on the U.S. Supreme Court’s decision in Santa Fe Independent School District v. Doe (2000), in which the Court ruled that prayer over the loudspeaker at a Texas high school football game violated the Establishment Clause.

Cambridge Christian then filed a lawsuit in federal district court in September 2016, alleging that the FHSAA had violated its rights under the Free Speech and Free Exercise Clauses of the First Amendment.  The school contended that the FHSAA committed viewpoint discrimination by allowing secular messages over the loudspeaker but not religious messages.

A federal district court dismissed the lawsuit, finding that the proposed forms were a form of government speech and that the school had legitimate concerns under the Establishment Clause.

The appeals court recognized that if the prayers are considered government speech, the free-speech claim fails.

Under history and tradition, the appeals court reasoned that this factor cuts in favor of the school and a finding of private speech, because “the allegations in the complaint strongly suggest that the state has allowed the dissemination of prayer over the public-address system in the past.”

The endorsement factor asks whether the public likely would view the speech as endorsed by the government.  The appeals court reasoned that this factor cuts in favor of the FHSAA and a finding of government speech.  The appeals court noted that the state organized the game and “likely would have been seen as endorsing any communication over the loudspeaker because, although the game was between two Christian schools, it was the Championship of Division 2A, a class of a league organized by the FHSAA.”

With respect to the control issue, the appeals court said the record in the case was not clear.  For example, the appeals court pointed out that “the Administrative Procedures do not tell us whether anyone other than the FHSAA announcer spoke over the loudspeaker.”

The appeals court concluded on this issue: “The long and short of it is that we simply do not have enough information to say with any confidence that, if everything in the complaint is true, speech disseminated over the public-address system was and would have been government speech as a matter of law.”

The appeals court then reasoned that, if not all of the speech over the loudspeakers was government speech, then the school’s viewpoint discrimination claim must be allowed to proceed.   The appeals court reasoned that the loudspeaker was a nonpublic forum, but the rule in First Amendment law is that even in a nonpublic forum, a governmental entity must enact rules that are reasonable and not discriminatory based on content or viewpoint.   The appeals court determined that the school plausibly alleged that the FHSAA restricted the prayer because of its religious content.

The appeals court expressed concern that the FHSAA appeared to be inconsistent in its approach to the prayers.   Apparently, the FHSAA had allowed the prayers some in the past but denied the request by Cambridge Christian and its football opponent.   The appeals court reasoned that this inconsistency “is sufficiently troubling to allow this free speech case to progress to discovery.”