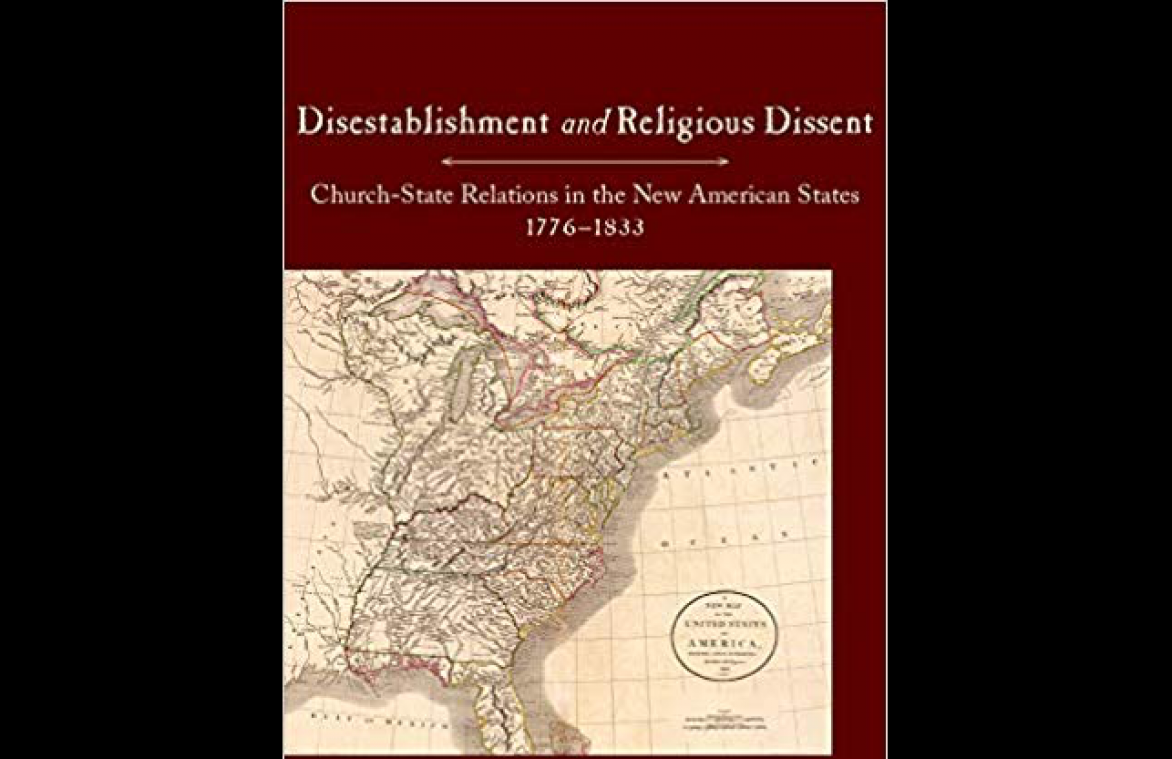 Much of what we know, or think we know, about the role of religion in American politics stems from our understanding of the First Amendment to the U.S. Constitution, which prohibits Congress from adopting laws “respecting an establishment of religion or prohibiting the free exercise thereof.”  This Amendment, in turn, is often interpreted through the philosophy of Thomas Jefferson and his 1801 letter to the Danbury Baptist Association on the need for a “wall of separation between church and state.”

This remarkably conceived book, which is edited by a Professor Emeritus of Law from the University of Missouri (Esbeck) and a professor of history at Samford University (Den Hartog), features contributions from a diverse array of highly qualified scholars with backgrounds in history, law, and political science.  Much as Alexis de Tocqueville did in Democracy in America, the volume reminds readers that the establishment clause did not disestablish a national church because “there was nothing to dismantle” (p. 4).  The real action took place at the state level beginning in May of 1776 when the Second Continental Congress encouraged states to write their own constitutions.  Although Massachusetts was the last of the original 13 states officially to disestablish its churches in 1833, the essays in this book reveal that even after states ended such establishments, they often continued to require test oaths and otherwise aided Protestant religion.

Organized much like one of my favorite books on constitutional ratification – Michael Allen Gillespie and Michael Lienesch’s Ratifying the Constitution, which was published in 1989 by the University Press of Kansas—this volume devotes separate chapters to how disestablishment took place within each of the original thirteen states, in the order in which such disestablishment occurred; it also includes developments in other early states and territories.

Many scholars will undoubtedly turn to this book chiefly for information about a single state or region, and the chapters are clearly titled and arranged, and contain sufficient detail, so that they might profitably do so.  I have read many fine collections of essays in which the editors methodically used the introductory chapter simply to summarize each author’s individual reports.  Instead, Esbeck and Den Hartog leave this pleasure to readers and focus instead on two aspects of the essays as a whole.

First, the editors describe their methodology.  They asked each author “to look for the cultural, political, biblical, and economic concerns bearing on their state’s disestablishment” (p. 5).  They further encouraged them to focus on primary materials, and to look for the existence of five features that typically characterized British-like establishments.

They also asked authors to look for religious exemptions from such general duties as military service or oath taking; any disabilities on religious societies; and any recorded state debates related to such subjects during the ratification of the federal constitution or the bill of rights.

Second, the editors have highlighted their own collective findings, many of which challenge both conventional wisdom in the field of scholarship and in prominent decisions of the U.S. Supreme Court.  Perhaps imitating Moses, they divide these into ten statements.

The first, most fascinating, most potentially overstated, and most controversial finding, which, perhaps prematurely, presupposes that the editors’ methodology has captured all relevant evidence, is that “Neither the U.S. Constitution of 1787-88 nor the First Amendment of 1789-91 contributed to the disestablishment process in the original thirteen states” (p. 9).  In explaining this statement, the editors further note that the First Amendment did not provide the model for state constitutions (I have reason to believe, but the editors do not directly address, whether the Virginia Declaration of Rights may have been more influential); that states did not copy the prohibition of religious test in Article VI; that states did not utilize the “swear of affirm” language of Article I, Section 3, and that neither the debates over the ratification of the Constitution nor over the Bill of Rights influenced state decision-making in this area.

A second finding, which the essays amply proved, emphasizes that although states found it easy to extend the “right of private judgment” to citizens, it took fifty years before this right resulted in the repeal of all “religious  tax assessments and glebes” (p. 10).

The third finding disputes the commonly-held assumption that lies behind some important Supreme Court decisions, that the disestablishment of the church in Virginia was more influential and thus more important than that of other states.  Indeed, the editors believe that Virginia may have been something of an “oddity,” in that it was the only state that required the established state church to return glebes and other personal property (p. 11).

Editors believe disestablishment reflected religious pluralism of the day, not hostility to religion

The editors’ fourth finding attributes the support for disestablishment as coming primarily from dissenting Protestants whose stance grew from their interpretations of Scripture and represented the increasing religious pluralism of the day.  Far from those who think that the aim of disestablishment was to create a “godless” constitution, the editors believe that such origins “depress claims that disestablishment was forged out of government indifference to religion, or even hostility to it” (p. 12).  Dissenters did not anticipate that separation of church and state would require separation of “religion and politics” (p. 12).

The editors’ fifth conclusion is that the process of disestablishment took 50 years, while the sixth observes that resistance to the Church of England was not a major impetus to the Revolutionary War and that the war was accordingly not as anticlerical as the French Revolution.  On a related note, the editors believe that anti-Catholicism had relatively little to do with initial state disestablishments while acknowledging—much as Philip Hamburger argued in Separation of Church and State (Harvard, 2002)-- that once such a disestablishment was achieved, some states celebrated strict church/state separation as a way of portraying Catholicism as anti-American (15).

The eighth finding links various state regulatory disabilities on religious societies to “a populist desire to safeguard religious individuals from ecclesiastical authorities” (p. 15).  The editors further tie this to what Nathan Hatch has identified in his eponymously titled book the “democratization of American Christianity” (p. 16).

The ninth finding describes how religious tests evolved from narrow preferences for the established state religion, to include all Protestants, and eventually all Christians.  Finally, the editors think (and this reviewer agrees) that James Madison played a far more important role in the disestablishment process than his friend Thomas Jefferson, who is much more frequently credited.  Indeed, the editors argue that Jefferson’s own Bill for Establishing Religious Freedom was largely responsible for later discriminatory restraints imposed on all of Virginia’s churches, not a cause for the expansion of religious freedom fully conceived” (p. 17).

The authors of successive chapters describe the nuances of each individual state or territory (some of which had plural establishments) and trace constitutional provisions, the adoption of laws, the development of various denominations, and often the influence of political parties, within each.  I found the observations that Jefferson’s widely quoted Letter to the Danbury (Connecticut) Baptist Association got no contemporary news coverage and that the Association refused to record the response in its proceedings (p. 339) to be almost as fascinating as the fact that a missionary pastor to New Hampshire who was born on March 4, 1789, when the U.S. Constitution first went into effect, was named “Federal Constitution Burt” (p. 359).

In short, Esbeck and Den Hartog have conceived and charted, and multiple contributors have delivered, a finely executed volume on individual church-state relations in the nation’s first 50 years and beyond.  It is likely to become the standard work on the subject and a provocative source for further research and reflection.