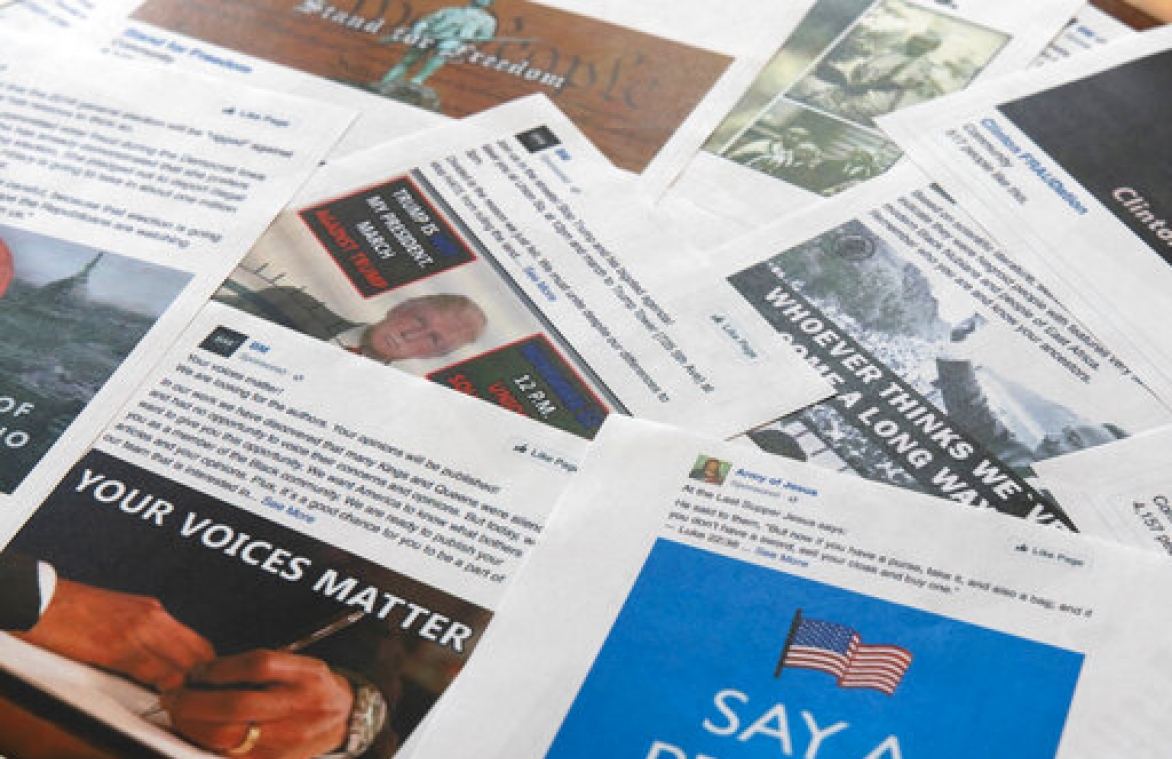 Maryland was one of many states to amend its election laws after the Presidential election of 2016 where many allege that Russian nationals attempted to influence the election with a mass disinformation campaign on the Internet. But the 4th Circuit said the law went too far and violates the First Amendment by forcing online publishers to engage in compelled speech and keep onerous records. (This photo shows some of the Facebook ads linked to a Russian effort to disrupt the American political process and stir up tensions around divisive social issues during the 2016 presidential election in the United States, released by members of the U.S. House Intelligence committee, in late 2017. AP Photo/Jon Elswick, used with permission from The Associated Press.)

Maryland’s Online Electioneering Transparency and Accountability Act violates the First Amendment, a federal appeals court panel has ruled.   While serving important aims, the appeals court reasoned that the state addressed the task “in too circuitous and burdensome a manner to satisfy constitutional scrutiny.”

Maryland was one of many states to amend its election laws after the Presidential election of 2016 where many allege that Russian nationals attempted to influence the election with a mass disinformation campaign on the Internet.

First, the new law added online advertisements to the record-keeping and disclosure requirements.   Second, the state extended its existing regulations to cover online platforms, which the law defined to include any public website in the state that reached 100,000 unique monthly visitors.

(See Encyclopedia article on campaign disclosure requirements and a case collection on Campaign Finance and Other Political Campaign Regulations.

The new law took effect in July 2018.  A group of publishers, which included notable newspapers such as The Washington Post and The Baltimore Sun, challenged the portion of the new law related to online platforms.  They argued that the new onerous record-keeping requirements violated the First Amendment.

The law requires that within 48 hours of posting a political ad, an online platform must disclose the identity of the purchaser, the individuals who exercise control over the purchaser, and the total amount paid for the ad.   This material must be displayed for  up to a year following an election.

The law also contains an inspection requirement.  This part of the law requires online platforms to collect their records of political ad purchases and keep them for at least a year so that the Maryland Board of Elections can review them.

The challenging publishers contended that the publication and inspection requirements imposed on online platforms violated the First Amendment because it compelled them to engage in speech.   A federal district court enjoined enforcement of these provisions of the Maryland Online Electioneering Transparency and Accountability Act.

The panel also emphasized that both the publication and inspection requirements required the publishers to engage in a form of compelled speech.   “Requiring the press itself to disclose the identity or characteristics of political speakers is a problematic step,” the panel wrote in part because the First Amendment protects a great deal of anonymous speech.

With regard to the publication requirement, the panel noted that the new law imposed financial disincentives on publishers to run political ads as opposed to other types of ads.   “In sum, it is apparent that Maryland’s law creates a constitutional infirmity distinct from garden-variety campaign finance regulations,” the panel wrote.

The panel explained that the law intrudes into editors’ ability and function to determine what speech to print and publish.   The panel cited the U.S. Supreme Court’s decision in Miami Herald Publishing Co. v. Tornillo (1973) for the principle that the First Amendment applies to all “news, content, and advertising.”

The appeals court panel also found problems with the inspection requirements on First Amendment grounds.  “The inspection requirement implicates the same set of concerns and more,” the panel wrote. “Not only does it compel the Publishers to turn over information to state regulators, it also brings the state into an unhealthy engagement with news outlets.”

The panel concluded: “While we credit the aims of Maryland’s legislators, we can in no way approve the state’s chosen means.  The most basic First Amendment principles compel as much.”