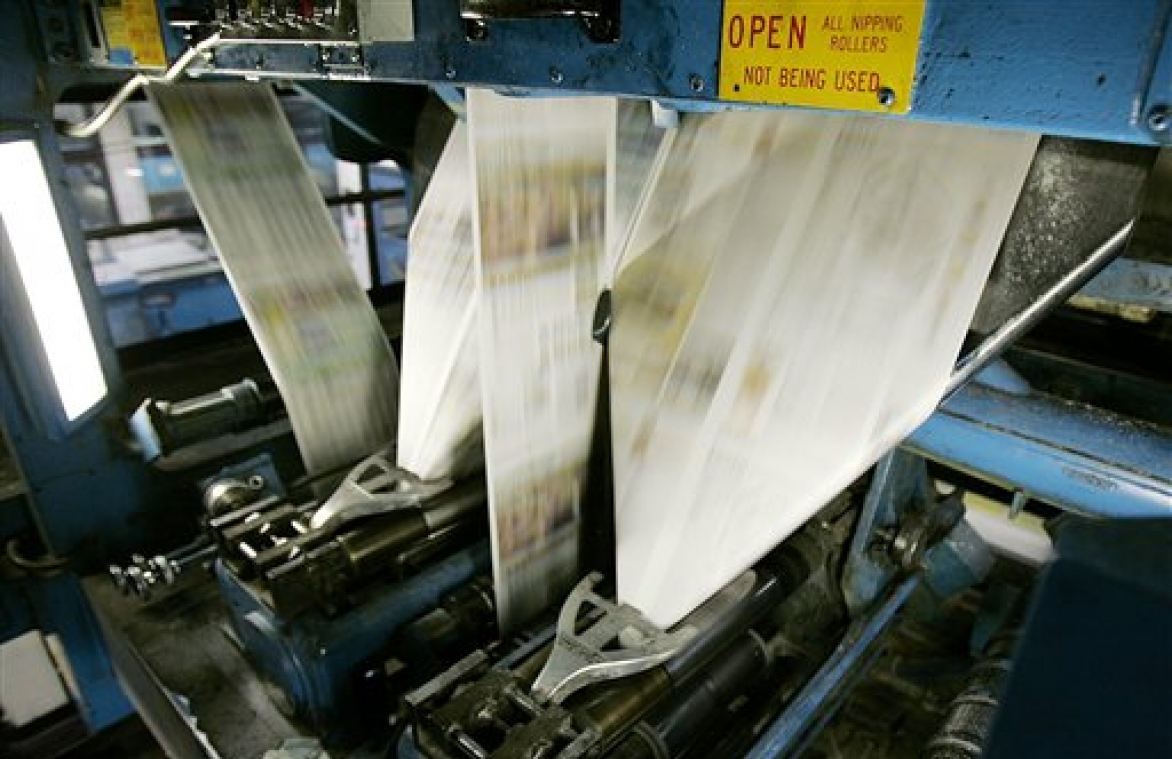 A new report says that 2,000 print newspapers have been shuttered in the past 15 years. USA Today Network-Tennessee columnist Keel Hunt says the decline comes when strong journalism is needed more than ever, and points to potential positive developments of non-profit online-only journalism organizations. (In this photo, papers run through machines at the Minneapolis Star Tribune production plant in this July 12, 2006 file photo. AP Photo/Jim Mone, file)

The shrinkage of America’s print newspapers – both in number and content – could not have come at a worse time.

Watching it shrink has been painful for me for at least three reasons, two of them personal but the third extremely public and even dangerous for our republic:

1. Newspaper journalism is how I grew up and made my own living, from the summer after high school through my twenties.

2. The Tennessean was where I learned many of my own early life-lessons about human nature, and where I also made some of my best life-long friends.

3. Without a vigilant well-staffed news media, our governments at all levels are essentially un-watched, un-scrutinized, un-challenged. Historically, that’s why some have called newspapers and television news “the Fourth Estate” for their integral role in how a proper democracy ought to work.

I’ll admit those first two points are personal for me, bordering on heartfelt nostalgia this many years later. But that third reason is the main one and ought to concern us all.

A recent report from the University of North Carolina, Chapel Hill, said the U.S. has lost nearly 2,000 newspapers over the past 15 years. It’s not a new phenomenon, but the trend appears to be accelerating, and the concentration of media ownership bodes for even more shrinkage.

It’s easy to see why this is happening – and is probably irreversible. Nationally, newspaper revenues have been walloped by the internet. Some newspapers closed, others have seen their newsroom staffs cut back – meaning fewer editors, reporters, photographers – to keep the operating books balanced for the sake of investor profitability.

Smaller staffs can mean either shallower coverage or fewer issues questioned and reported, and more likely both.

When the press dwindles, only winners are crooked politicians

The only winners in all this upheaval: Crooked politicians who, because they live in shadows, escape attention. Most officials I have met are decent, upstanding, and ethical, but the trouble is never with them. It’s the marginal official, the one with flexible ethics, who thrives in darkness.

Sorting out who is in which category is a fundamental function of good journalism from its perch outside government. Fewer newspapers therefore mean more darkness, allowing for more mischief hidden in the civic realm.

Non-profit models of journalism are emerging in Tennessee

But there are glimmers of new hope around, and they deserve our support. One is in Nashville.

My friend Steve Cavendish, a veteran journalist, has a vision for a non-profit model for newspaper ownership. His ‘paper’ would appear online, not on newsprint, and its working capital would come from charitable donors not traditional investors who expect a dollar return. In January, Steve articulated both the current plight and also his vision for how it would work, in an important piece in the Washington Post.

Yesterday I asked Steve how the project is going.

“We’re talking to a lot of folks now, raising money above what has already been pledged,” he told me, “and after we launch we’ll be looking to foundations for some support. We need to make sure we’re on sound financial footing, and that requires philanthropic venture capital. We have a challenge grant we're working against right now that will be a dollar-for-dollar match, so as soon we get to $1.5 million, that will become $3 million, and that will get us to our launch.”

That challenge grant is a huge step forward and obviously encouraging now for Steve and his early funders. The model can work. In fact, similar ventures are already working in a few other U.S. cities, including Memphis. (Check out the impressive new Daily Memphian.)

We all need this type of non-profit initiative to succeed and to be added to the mix, because the old for-profit model has become perilous now for our democracy and freedom. And note that I’m not referring here to the well-heeled Post and The New York Times but to the rest of the print newspapers that struggle to serve the rest of us. Among the majority of the old print newspapers, only the most concentrated ownership groups will survive and likely not with their old robust newsrooms.

Of all times over our nation’s history – just when Americans need them most – this is not the time for us to make do with less aggressive coverage of local, state and national governments. This is the time for even deeper attention and more scrutiny - not less - of what goes on in government.

That’s how the “system” was supposed to work under the First Amendment. And it still is.

This column was first published by veteran journalist Keel Hunt on his Field Notes site.