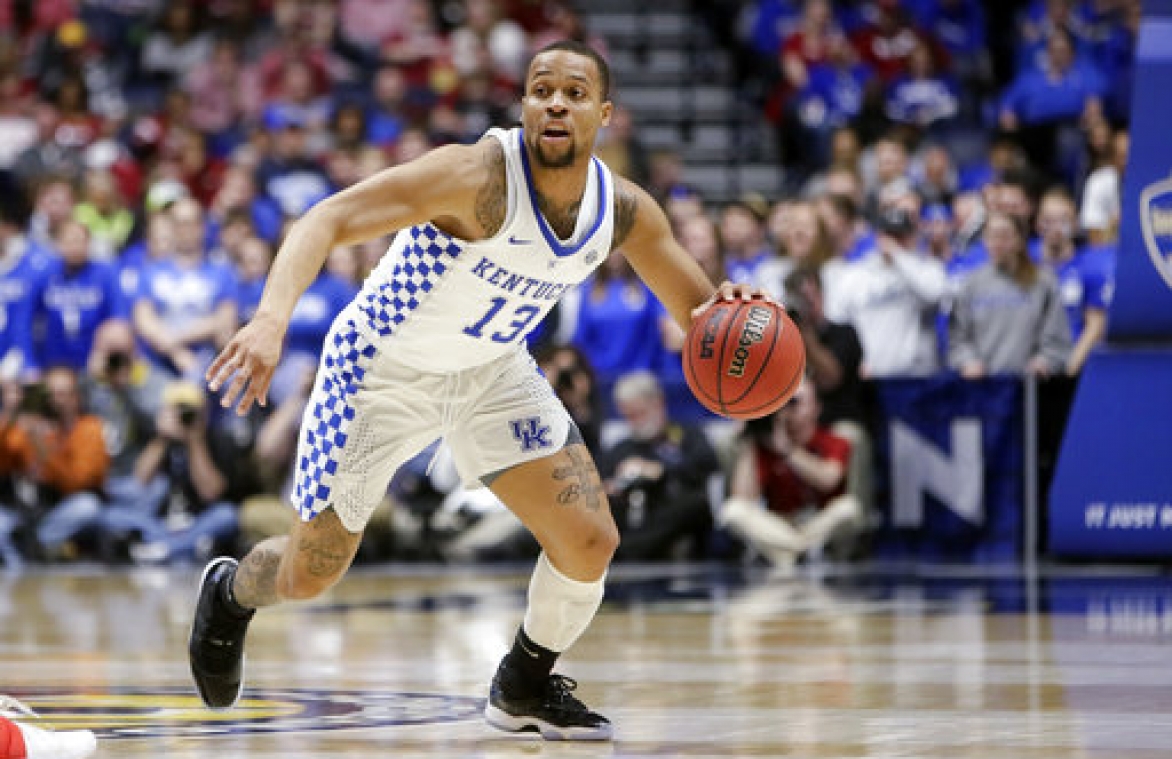 The 6th U.S. Circuit Court of Appeals on Feb. 27, 2020 affirmed the dismissal of a lawsuit by a referee against a Kentucky sports radio station that claimed the radio station's commentary about his calls during a 2017 tournament game of the Kentucky Wildcats led people to harass him and his business. The court said the radio commentary was protected under the First Amendment. (In this March 2017 photo, University of Kentucky Wildcats basketball Kentucky guard Isaiah Briscoe plays against Arkansas in the first half of an NCAA college basketball game in the championship of the Southeastern Conference tournament in Nashville, Tenn. AP Photo/Wade Payne. Used with permission from The Associated Press.)

A college basketball referee who alleged that Kentucky Sports Radio incited harassment against him after his officiating during a NCAA tournament game of the Kentucky Wildcats lost his lawsuit before a federal appeals court on First Amendment grounds.

The appeals court ruled that the First Amendment protected the speech of Kentucky sports radio hosts who fanned the flames of criticism of the referee’s officiating during the March Madness game.

In March 2017, John Higgins refereed an Elite Eight game between the Kentucky Wildcats and the North Carolina Tar Heels, two perennial powers in college basketball.   After the game Kentucky’s coach John Calipari stated, “It’s amazing that we were in a game where [the referees] practically fouled out my team.”

Matthew Jones, a popular talk show host on Kentucky Sports Radio, described the officiating as “putrid” and said that referee Higgins had been “part of some of Kentucky’s most painful losses.”   Kentucky basketball fans discovered that Higgins owned a roofing business in Omaha, Nebraska, called Weatherguard Roofing.

One day after the game, Jones read an e-mail from a listener who thought about “leaving a bad review on John Higgins’ roofing Yelp page.”  Jones responded that this would be a “bad thing to do.”  Jones noted that other fans were trolling Higgins.

The trolling campaign took a toll on Higgins’ business, which received more than 3,000 phone calls in the two days after the game.  Many people gave the business bad reviews on the Internet.   Higgins’ family received threatening calls.

The defendants filed a motion to dismiss, arguing that the First Amendment protected their communications.  A federal district court agreed and dismissed the lawsuit.   On appeal, a three-judge panel of the 6th U.S. Circuit Court of Appeals affirmed the dismissal in Higgins v Kentucky Sports Radio.

“The First Amendment bars the theory and the claims on this record,” wrote Judge Jeffrey Sutton for the appeals court panel.

Sutton noted that the subject matter of the underlying speech – speech about the NCAA tournament and basketball refereeing – touched on matters of public concern or importance.   He wrote that “criticism comes with the territory.”

Higgins argued that Kentucky Sports Radio encouraged the harassment of him and his roofing business.  He contended that this speech fell into two narrow unprotected categories of speech: (1) incitement to imminent lawless action and (2) defamation.

The U.S. Supreme Court explained in Brandenburg v. Ohio (1969) that even advocacy of illegal conduct is a form of protected speech unless it incites imminent lawless action and is likely to lead to such lawless conduct.   Sutton explained that Kentucky Sports Radio or its commentators never said that “fans should attack [Higgins’] business.”

“While the announcers at Kentucky Sports Radio do no merit prizes for sensitivity and restraint, they did make at least six statements that discouraged the fans’ conduct,” Sutton wrote.  Higgins contended that Kentucky Sports Radio encouraged the harassment.  Sutton was not swayed, writing that someone “cannot be sued for incitement merely because it failed to condemn the behavior of others with sufficient firmness or clarity.”

Higgins also contended that Kentucky Sports Radio conspired to defame Higgins.   However, Sutton easily dismissed that argument as well, noting that Higgins could not show that anyone at Kentucky Sports Radio acted with “actual malice” – acting knowing that information was false or in reckless disregard as to the truth or falsity of speech.

“Merely repeating potentially false reviews generated by other users may be in bad taste,” wrote Sutton.  “But it cannot by itself constitute defamation.”

Sutton concluded with memorable language:  “Those who step into the public limelight, even temporarily, must face the hazard that sometimes comes with it.  Should they find a commentator’s discussion of their foray into public life unsavory, they cannot easily cry Foul.”