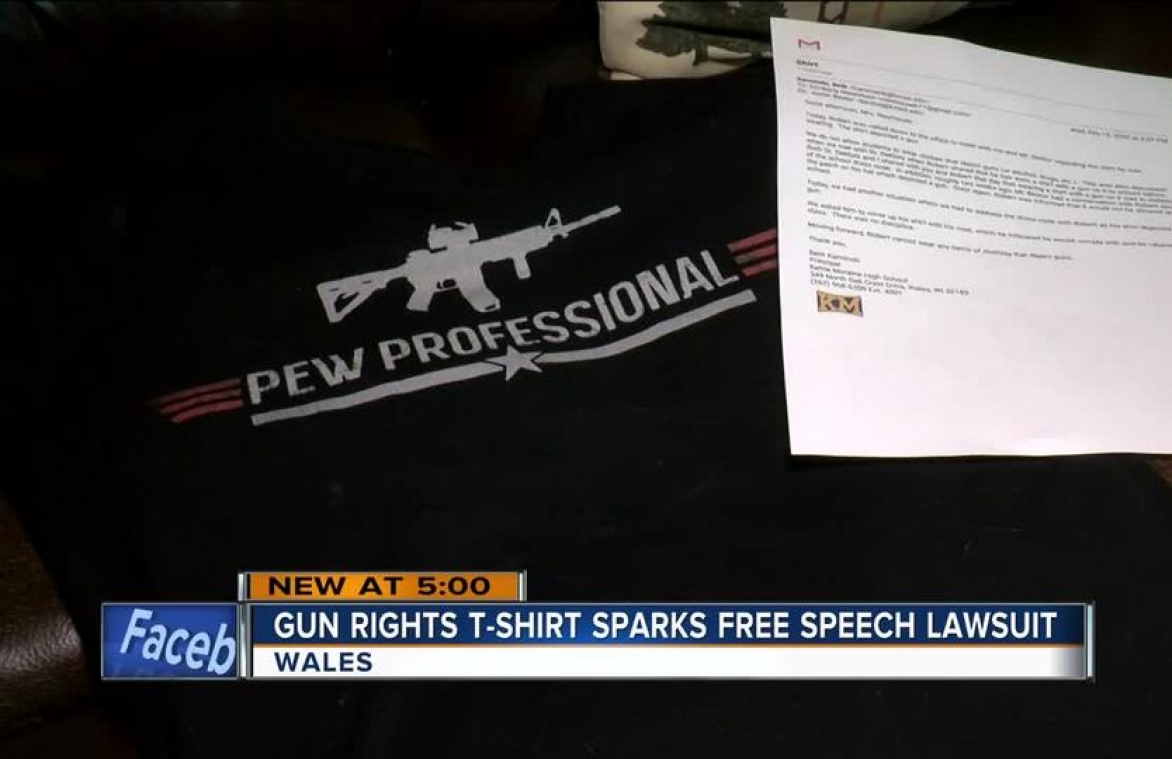 In a student free-speech case, a Wisconsin middle school student alleges that his First Amendment free speech rights were violated when a school associate principal warned him that he could not wear t-shirts that depict guns.

A Wisconsin middle school student has filed a federal lawsuit, alleging a violation of his First Amendment free-speech rights related to the censorship of gun t-shirts he wore to school.

The student, known in court papers by his initials N.J., alleges that David Sonnabend, the associate principal of Shattuck Middle School, has warned him that he could not wear t-shirts that depict guns.

One of the t-shirts in question has the inscription “Smith & Wesson Firearms – Made in the USA Since 1982” with an image of a revolver.

The other t-shirt has the inscription “I’m a Patriot – Weapons are Part of my Religion” and has “2/A” and “17/76” written on it with a medieval helmet and two antique rifles.

The student’s complaint in N.J. v. Sonnabend alleges that the student “has been chastised by some teachers and referred to Defendant [Sonnabend] because of his wearing the Shirts.”   According to the complaint, Sonnabend told N.J. that he is prohibited from wearing any clothing that depicts firearms.

The complaint emphasizes that N.J.’s wearing of the shirts has never caused any disruption at Shattuck Middle School.  This is an important allegation, because the seminal standard in student free-speech (K-12) cases comes from the U.S. Supreme Court’s historical decision in Tinker v. Des Moines Independent Community School District (1969).

In Tinker, the Supreme Court explained that public school officials can prohibit student speech only if that speech causes a substantial disruption of school activities or invades the rights of others.

Student speech can be restricted if it causes a substantial disruption

“By restricting Plaintiff’s clothing based on its depiction of firearms in a non-violent, non-threatening manner, Defendant is violating Plaintiff’s freedom of expression guaranteed by the First Amendment,” the complaint reads.

The complaint also alleges that the dress code provisions prohibiting any student clothing depicting weapons is overbroad.  Under the overbreadth doctrine, a law or regulation must not prohibit a substantial amount of constitutionally protected speech in addition to unprotected speech. If it does, the regulation is simply too broad.

The complaint also makes an allegation of vagueness to a policy in the dress code that allows school officials to prohibit student clothing that is “inappropriate.”   A law or regulation is too vague if persons have to guess at its meaning.

“By deciding on a case-by-case basis what clothing is ‘inappropriate,’ Defendant’s restrictions are unconstitutionally vague,” the complaint reads.