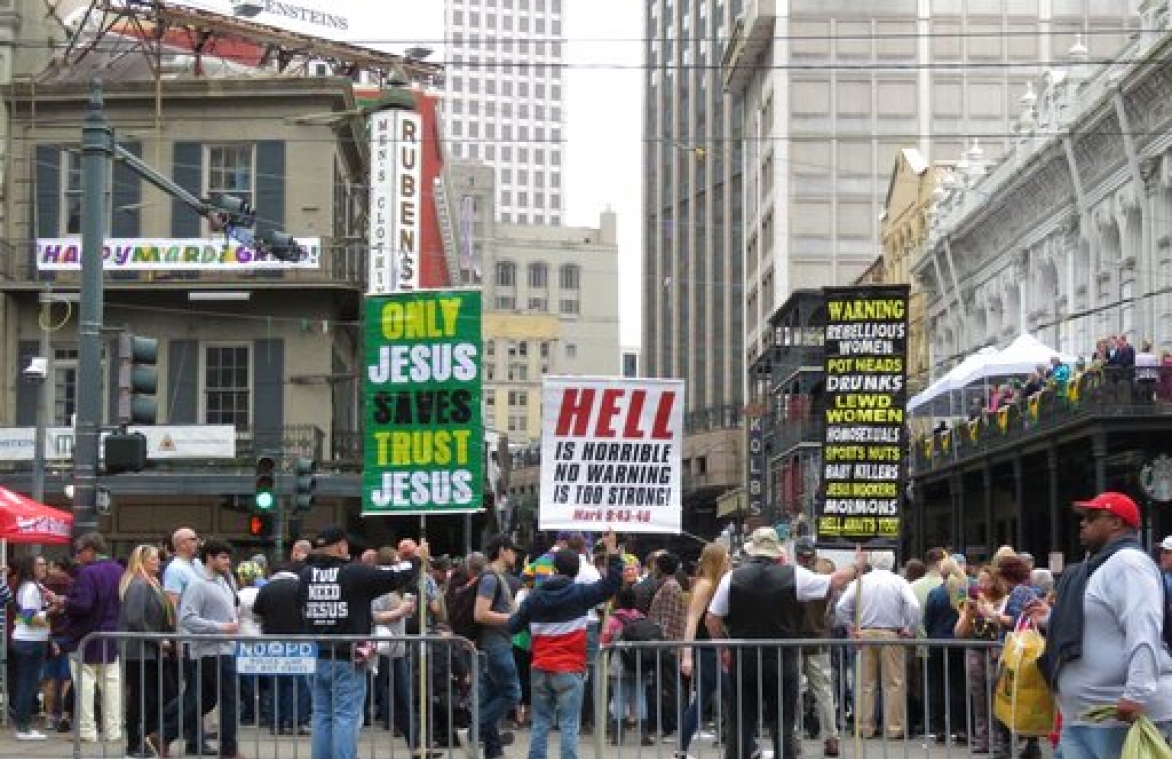 A street preacher who was arrested in July 2015 in Monroe, Louisiana, for disturbing the peace claimed the ordinance violated the First Amendment and that the officer arrested him in retaliation for protected speech. But the 5th U.S. Circuit Court of appeals rejected his claims, finding the ordinance constitutional and the arrest was justified based on a woman's complaint about the preacher accosting her with several negative statements. (Photo of street preachers during Mardi Gras in New Orleans on Feb. 25, 2020 by Janet McConnaughey. Used with permission from The Associated Press.)

A Christian street preacher in Louisiana lost his First Amendment lawsuit before a federal appeals court, because the court determined that the arresting officer was entitled to qualified immunity.

The appeals court reasoned that the officer was justified in relying on a statement from a woman who said the street preacher accosted her with several negative statements.

The case arose in July 2015, when Clarence Dean Roy, a street preacher, went to a public street in Monroe, Louisiana, where several bars and nightclubs operate.  Roy carried a six-foot cross and dressed in an orange jumpsuit.

He and a few others engaged in what he called “bar ministry” or “street ministry.”   This consists in accosting individuals leaving bars and nightclubs and warning them about the wages of sin.

That evening, a woman approached Sergeant James Booth and told him that Roy followed her, saying “ugly, lewd things” such as that she is a “homosexual,” that her “father is the devil”, and that “she is going to hell.”   Roy denied following the woman or even seeing the woman on the night in question.

Preacher arrested for disturbing the peace

However, based on these allegations, Booth issued Roy a summons for disturbing the peace under the city ordinance.  Monroe’s ordinance reads in part:

It shall be unlawful to commit an act of disturbing the peace.

Disturbing the peace is the doing of any of the following in such a manner as would foreseeably disturb or alarm the public, or create any dangerous or violent conditions.  …

Using profane or threatening language or making obscene remarks, gestures, or indecent proposals to or toward another which in the manner uttered has a tendency to incite an ordinary addressee to violent retaliatory action and a breach of the peace. …

Disturbing the peace shall also include the commission of any act other than that permitted as an exercise of free speech or free assembly guaranteed by the constitutions of the United States and the State of Louisiana, in such a manner as to disturb or alarm the public, or make such a disturbance imminent, or to provoke another or others to retaliatory action or violence.

Roy had a bench trial – a trial before a judge only without a jury.  The judge acquitted Roy.   Following his acquittal, Roy filed a federal civil rights lawsuit against the City of Monroe, alleging that Booth falsely arrested him in retaliation for his protected speech under the First Amendment.  He also contended that the city of Monroe’s disturbing the peace ordinance was unconstitutional.

Ultimately, he lost at the federal district court level.   On appeal, a three-judge panel of the 5th U.S. Circuit Court of Appeals affirmed in its February 13, 2020 decision in Roy v. City of Monroe.

The 5th Circuit addressed Roy’s claim that the ordinance was unconstitutionally vague.  Roy focused his vagueness attack on the catch-all provision of the ordinance that applied to any speech that would “make such a disturbance imminent, or to provoke another or other to retaliatory action or violence.”

The appeals court deemed the ordinance constitutional, finding that it applied to conduct that was “violent, boisterous, or provocative.”

The court explained: “’Violence,’ ‘boisterousness,’ and ‘provocativeness’ are concepts familiar to common usage and everyday speech.”

The appeals court also determined that Booth was entitled to qualified immunity, because it was reasonable for him to rely on what the woman told him Roy did.  The appeals court wrote that “no further investigation was necessary because Booth was relying on the personal knowledge of a witness and victim of the alleged conduct.”

The court added that there was no apparent reason to not believe the woman.