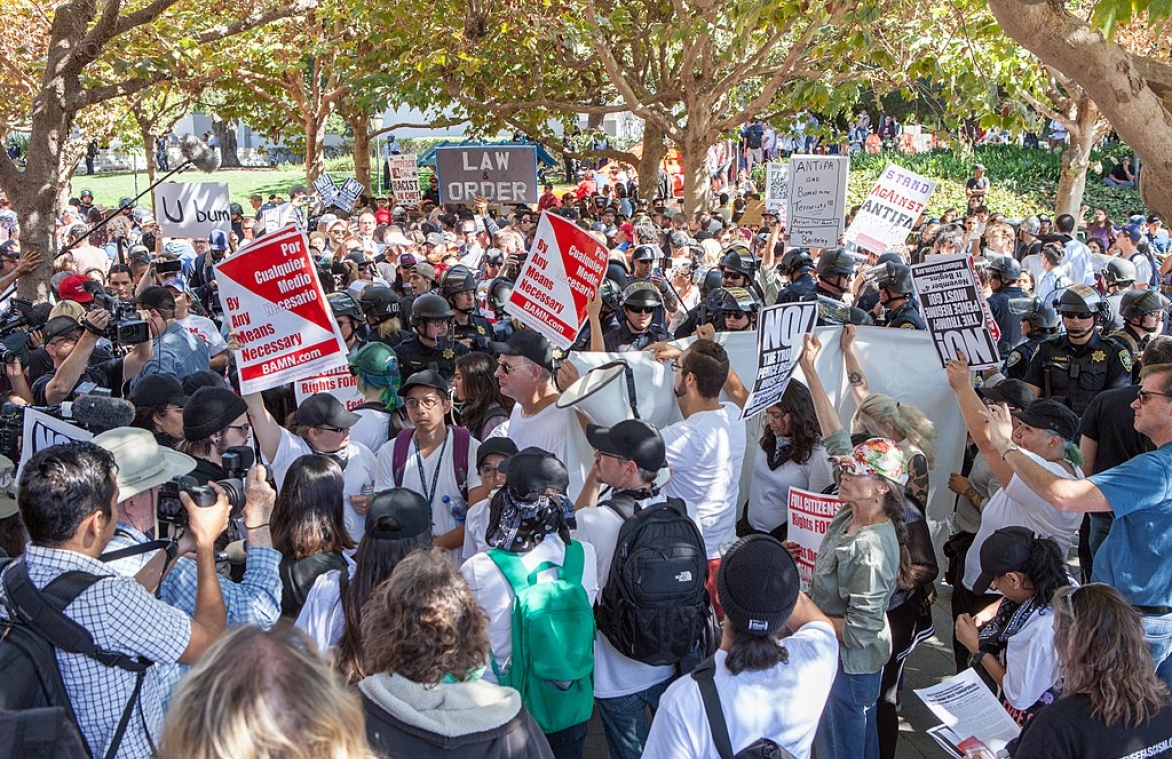 Here is the focus of The Project: “Pitched battles in the streets of Berkeley, California, as rival factions fight over who should be allowed to speak at one of America’s great public universities.  A faculty member seriously injured on the idyllic campus of Middlebury College in Vermont as violence erupts at a talk by a controversial visitor that she attempted to moderate.  Bedlam on the floor of the Texas House of Representatives with pistol-packing legislators threatening to kill each other.  A Princeton professor receives death threats and goes into hiding after cellphone videos of a commencement speech she gave in New England, in which she criticized President Trump, go viral. A massive replica of the Ten Commandments erected near the Arkansas State Capitol, but bulldozed into smithereens hours later by an angry citizen. A neighborhood pizza parlor in the nation’s capital hurled into the spotlight after a “fake news” conspiracy report inspires a North Carolina man to open fire in the restaurant. One of America’s great newspapers, the Los Angeles Times, reduced to recruiting subscribers by promising ‘We publish what’s REAL.'”

“What is happening to Free Speech in America?  The Free Speech Project at Georgetown University, launched with the support of the John S. and James L. Knight Foundation, aspires to find out and to analyze the condition of First Amendment values.”

Here is how The Project is described: “The project’s Free Speech Tracker, perhaps the first of its kind, documents incidents across the country over the past two years and going forward, as well as monitoring activity in state legislatures seeking to curb or calm public protest.”

“‘Our theory,’ says Ungar, a distinguished scholar-in-residence at Georgetown since 2014, ‘is that these incidents and various legislative initiatives are all related.'”

“‘When you have stark and deadly confrontations in Charlottesville and brawls and death threats on the floor of the Texas legislature, you cannot expect college and university campuses to be islands of civility and peaceful debate,’ he adds. ‘We have to understand and deal with the fact that some young people may try to shut down speech they find offensive because they are worried that they won’t have their own opportunity to speak up and be heard.'”

“‘Our nation was founded on the principles of free debate and dissent as enshrined in the First Amendment,’ said Jennifer Preston, Knight Foundation vice president for journalism. ‘At various times in history these rights have been challenged and are now being tested in an America where trust in institutions, in news and in each other grows more tenuous. To preserve the First Amendment, we must examine and better understand the forces that might jeopardize its future.’

“Ungar says the independent and nonpartisan Free Speech Project will address such concerns by looking more deeply into volatile incidents and emerging legislation around the country.”

“The website eventually will include videos of one-on-one interviews by Ungar with key thinkers in the free speech debate, and currently contains an archive of commentary and analysis from newspapers and other sources concerning freedom of speech and other First Amendment rights.”

“‘Free Speech is debated and analyzed at a dizzying pace by leading thinkers and journalists around the country and throughout the world,’ Ungar says. ‘We can’t compile every article related to free speech, but we do hope to offer commentary across the political spectrum to show the wide-ranging perspectives and viewpoints on this issue.'”

“Operating out of Georgetown but independent of the university, the project will also sponsor public programs – on campus in its first year and later in other venues – where various constituencies can contribute ideas about how to reestablish national respect for fundamental First Amendment values while also promoting civility and inclusiveness.”

“‘We need to focus on how better to preserve and protect free speech, but also get buy-in from all the people and groups that believe in free expression and are in a position to promote it,’ Ungar explains. ‘This is fundamental to the survival of American democracy, especially in these turbulent times.'”