Book Review: African Americans and the First Amendment: The Case for Liberty and Equality 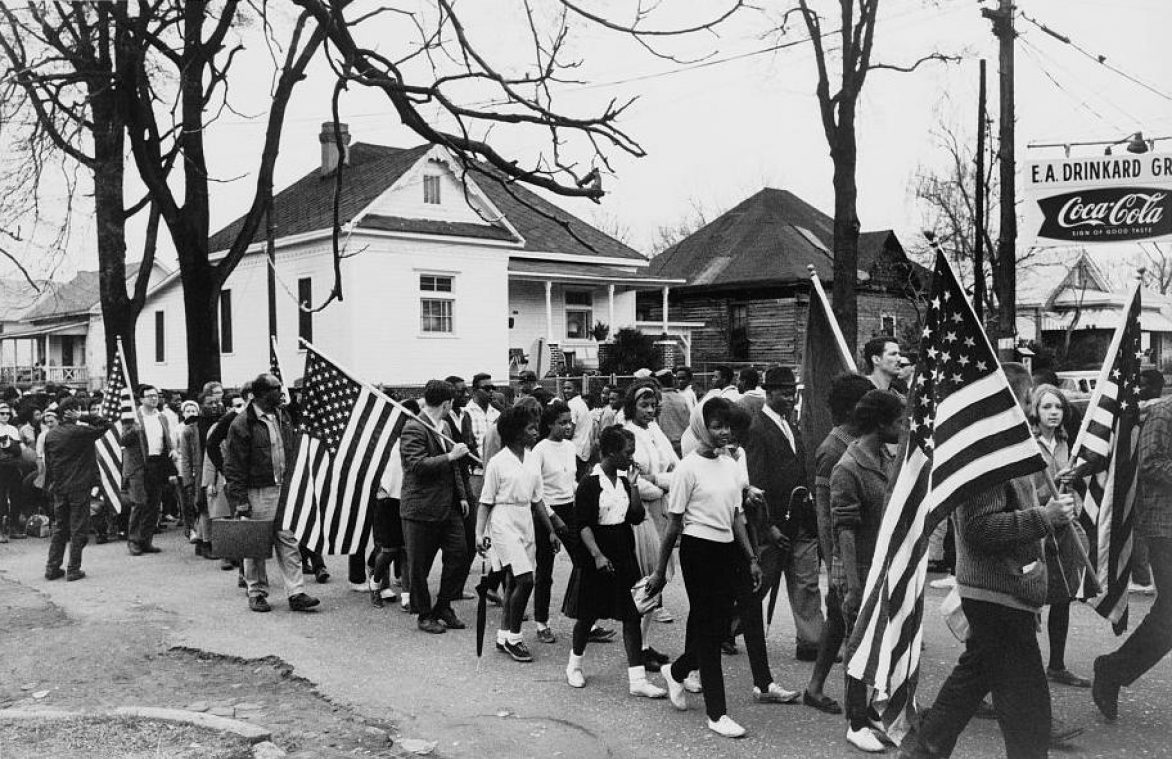 A new book by Timothy Schiell documents how freedom of speech, press and assembly have helped secure greater equality for African Americans and argues against calls for campus speech codes and laws against hate speech. In this photo, participants march in the civil rights march from Selma to Montgomery, Alabama in 1965. (Photo, Library of Congress, public domain, via Wikimedia.)

Those familiar with James Madison’s discussion of factions in Federalist No. 10 will know that governmental authorities are more likely to seek to suppress the liberties of minorities than of majorities.

More provocatively, in opposing those who would formulate broad campus speech codes or laws against hate speech, author Shiell convincingly argues that the values of free expression and equality “are not in fundamental conflict” (p. x) but are largely complimentary. Sheill is a professor of philosophy at the University of Wisconsin-Stout and has previously written the book Campus Hate Speech on Trial, which is now in its second edition.

It is common to distinguish between civil rights, which chiefly deal with providing equal protection to members of all races, and civil liberties, which refer to political freedoms like those listed in the First Amendment. However, as Shiell documents the role that civil liberties have consistently played in securing civil rights, he remains convinced that we should continue to view civil rights and liberties as allies rather than as antagonists.

Shiell divides his book into four chapters.  They respectively deal with: American Apartheid (his description of laws relative to race from colonial times through the 1930s); the pivotal case of Herndon v. Lowry (1937), which he considers to have been more important than the more publicized Scottsboro Cases; the civil rights movement; and modern calls for broad campus speech codes and laws against hate speech.

In surveying these topics, Shiell provides near encyclopedic references to, and succinct summaries of, major Supreme Court and other appellate decisions.   His references to such cases fill almost eight pages of his extensive bibliography.  Despite the plethora of such references, the book remains eminently readable.

Shiell’s decision to devote an entire chapter to Herndon v. Lowry, in which the U.S. Supreme Court eventually overturned the conviction of a young African American communist activist for writing provocative booklets on the grounds that they might lead to incitement to insurrection seems a bit disproportionate to his short descriptions of other cases.  However, Herndon certainly reinforces his argument, which he amply documents in his chapters on American apartheid and the modern civil rights movement, that even when judicial opinions did not specifically highlight race, the First Amendment has been essential to protecting racial minorities.

Shiell’s history of the interrelationship between civil rights and civil liberties reaches its climax in his chapter on hate speech.  There he distinguishes between “narrow” speech codes, which recognize such well-defined areas of unprotected speech as “true threat, incitement to violence, or hostile environment harassment” (p. 93), and “broad” speech clauses, which cast a far wider and more menacing net.

Shiell points out how, prior to the application of the First Amendment to states and localities, they used laws against racial ridicule not only to suppress movies like The Birth of a Nation that glorified white supremacy but theatrical productions like “Uncle Tom’s Cabin,” which highlighted racial injustices.  Such broad codes are a two-edged sword, which authorities are more likely to use against minorities than in their favor.

Arguing that the primary weapons against hate speech should be counterspeech and education, one of Shiell’s most useful arguments is directed against those who advocate banning broad categories of speech because other nations are doing so.  He points out that such laws are far from uniform.  Moreover, he also argues that they are often unsuccessful, typically drive such speech underground rather than eliminating it, and decrease respect for civic toleration.

In short, Shiell’s book is an important contribution to the literature on both the First and Fourteenth Amendments that elegantly pleas for recognizing their mutual importance in the ongoing quest for civil rights and liberties.