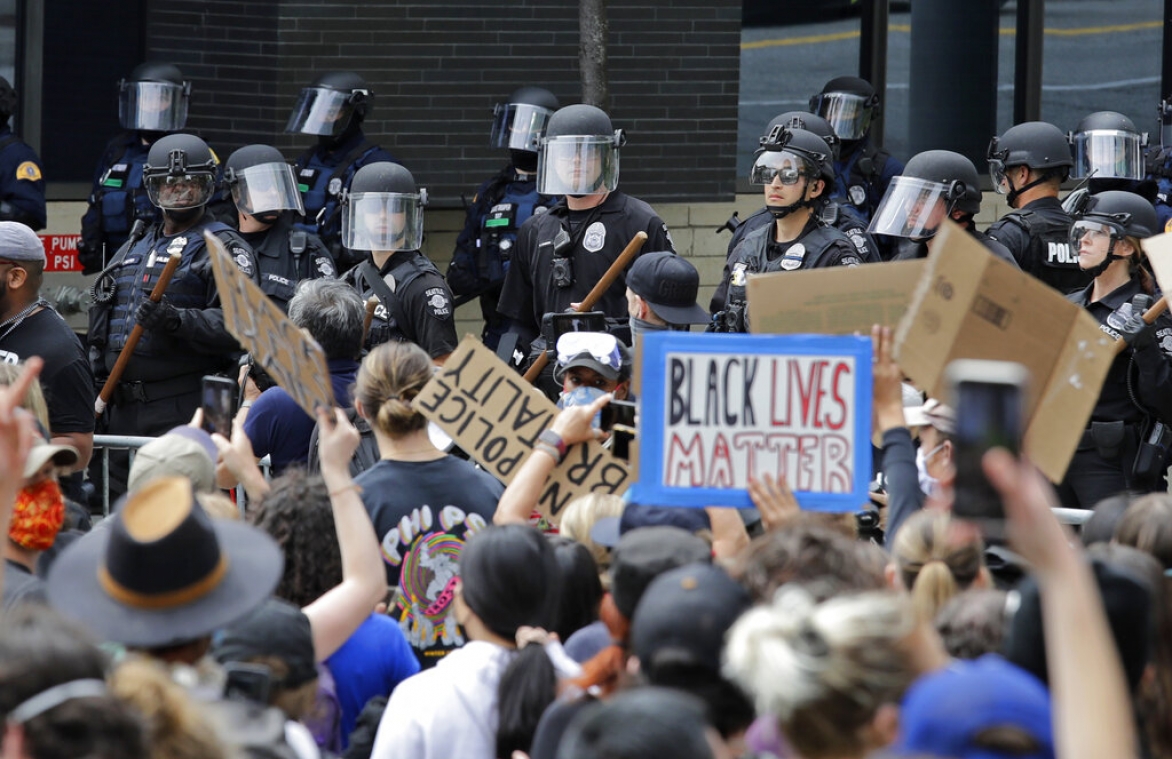 Police officers behind a barricade watch as protesters fill the street in front of Seattle City Hall on June 3, 2020, in Seattle, during protests over the death of George Floyd in Minneapolis. (AP Photo/Elaine Thompson)

SEATTLE (AP) — The Seattle Police Department has gone to court to gain access to unpublished media images from the May 30 protests as part of an investigation to identify who allegedly helped set police vehicles on fire and stole firearms from them.

The Seattle Times reports the SPD is demanding the production of unedited photos and video taken over a 90-minute afternoon period by The Seattle Times, KIRO 7, KING 5, KOMO 4 and KCPQ, according to an affidavit for a search warrant and a subpoena document submitted to King County Superior Court.

Brian Esler, an attorney representing the department, said that no action will be taken to demand the images until after a July 16 telephonic Superior Court hearing, and a judge issues a ruling.

"This is really just a narrowly tailored subpoena to try to get footage of events that occurred in public so we can identify the suspects," Esler said.

The Seattle Times and the other media outlets are contesting the action arguing a subpoena would violate the First Amendment and a Washington state journalistic shield law that sharply limits the circumstance when unpublished work must be turned over to law enforcement.
"There is nothing narrow about the documents that they have served on the newsrooms," said Eric Stahl, an attorney representing The Seattle Times and other media companies who called it a fishing expedition in a brief submitted to the court.

The media outlets, as well an amicus brief submitted by the Reporters Committee for Freedom of the Press, also outline another major objection. They say that granting the subpoena could foster a public impression that journalists are an investigative arm of law enforcement, which could lead to physical harassment when they cover protests.

Danny Gawlowski, a Seattle Times assistant managing editor, said in a declaration submitted to the court that one Times photographer was punched in the face by a protester. His statement said that newspaper staff have repeatedly had to explain to protesters that they are independent, and those assurances are instrumental to safely and accurately reporting the news.