News
September 3, 2020 by The Associated Press 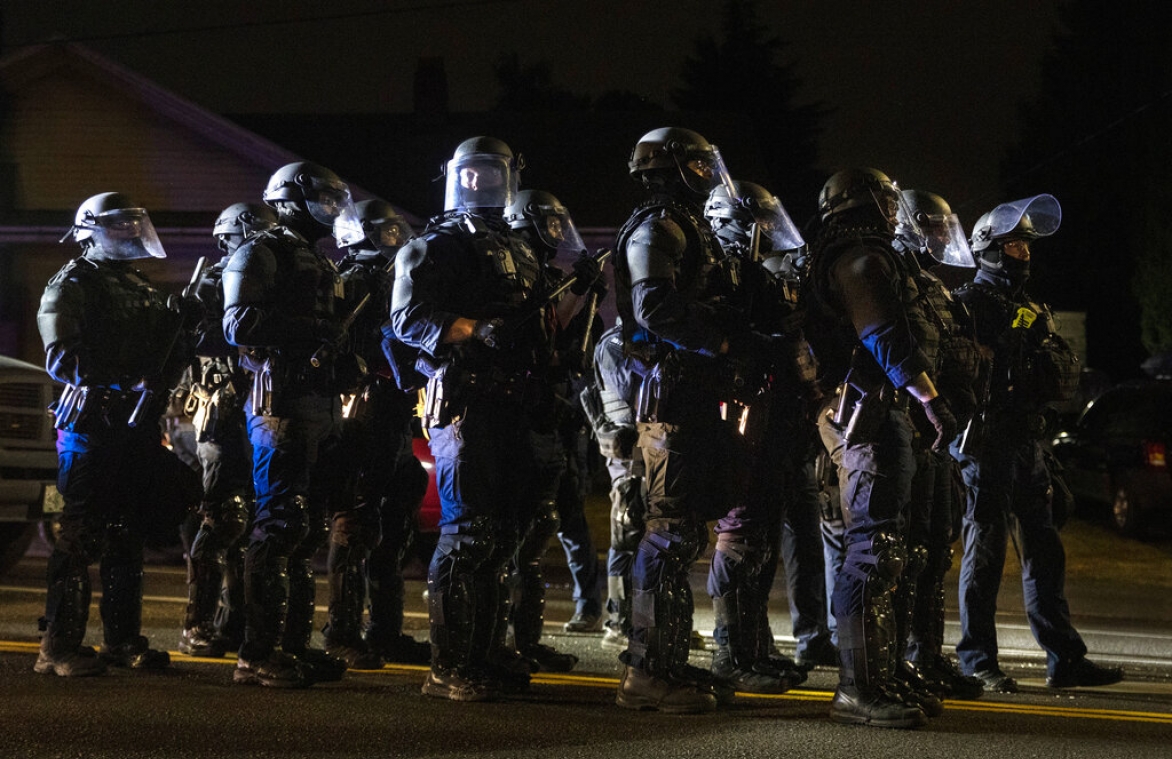 In this Aug. 30, 2020, file photo, Portland, Ore., police take control of the streets after making arrests on the scene of the nightly protests, at a Portland police precinct. Reporters — whether they're from major news outlets or are freelancers or self-proclaimed “citizen journalists" — say they are doing their job and law enforcement is hindering that work. Police say protesters have masqueraded as journalists and then set fires or thrown fireworks, making it a struggle to figure out who is a real reporter during the pandemonium. (AP Photo/Paula Bronstein, File)

PORTLAND, Ore. (AP) — The beam of a police officer's flashlight swept across a group of 15 people standing on the sidewalk in downtown Portland, Oregon, recording and taking photos of the nightly protests that have roiled the city for three months.

Most in the recent group wore helmets, reflective vests or shirts emblazoned with the word "PRESS" and had media badges dangling from their necks. But some were demonstrators, taking cover behind reporters despite orders to go home or face arrest.

"Hey," an officer yelled at his colleagues as they cleared streets and arrested people who weren't leaving. "Half this group is not press. ... Purple mask isn't press. Bicyclist not press. ... If they are not press, take them into custody."

For nearly 100 days, reporters have been covering protests that often turn violent in Oregon's largest city, and in the chaos, some journalists have been injured or arrested despite press freedoms laid out in the First Amendment. The clash also led to a lawsuit against federal authorities sent in to help local police in July.

Reporters — whether they're from major media outlets, freelancers or self-proclaimed "citizen journalists" — say they are doing their job and law enforcement is hindering that work. Police say protesters have masqueraded as journalists and then set fires or thrown fireworks, making it a struggle to figure out who is a real reporter during the pandemonium.

Suzette Smith, a freelance journalist who has covered the protests, recorded the Aug. 29 encounter between police and reporters. "Blue mask," an officer could be heard saying in the video Smith tweeted. Her mask was blue, and she held up her press badge. At least five people around her were detained, including someone else in a blue mask.

Smith, who was arts editor of the Portland Mercury alternative newspaper but was laid off during COVID-19 pandemic, said it was the first time she had seen officers approach a crowd of journalists and arrest people around her. But protesters will stay behind reporters to try to blend in, she said.

"Certainly that's annoying as a press person when there is somebody behind you yelling," Smith said. "I have definitely asked them not to yell in my ear or to stand so close."

Sergio Olmos, a reporter for Oregon Public Broadcasting, has been covering the Portland protests for months and has reported from other demonstrations in the city and civil unrest around the world. He said reporters have been treated differently during protests over the police killing of George Floyd in Minneapolis.

Olmos said police went from viewing reporters as professionals and neutral observers to demonstrators. While covering Portland's protests, he says he has been pushed to the ground by police, hit in the lip with a baton and tear gassed.

"(Journalists) who stay out there have made a mental commitment of 'I might get beat or I might get arrested, and that's just the cost of doing this job I guess,' " Olmos said.

According to the U.S. Press Freedom Tracker, made up of more than two dozen press freedom groups, over 740 aggressions against journalists have been reported during national Black Lives Matter protests this year. That can include attacks, arrests or equipment getting damaged, searched or seized.

"What really has been striking about these weeks of protests is that there has not just been one incident that stands out," said Kelly Simon, interim legal director of the American Civil Liberties Union of Oregon. "It is such a high volume of concerning abuses of our constitutional rights, that there is no way we can sit on the sidelines."

In July, the ACLU of Oregon sued Portland police and federal agents on behalf of a group of legal observers and journalists. A freelance photographer covering the protests for The Associated Press submitted an affidavit saying he was beaten with batons, sprayed with chemical irritants and hit with rubber bullets.

A federal judge granted a preliminary injunction exempting journalists and legal observers from orders to disperse after authorities declare a riot. But an appeals court later suspended it.

Police report that people with "press markings" have thrown commercial-grade fireworks, rocks and bottles at officers over the past two months and mingled with people in the crowd. In mid-August, police said an officer was seriously injured after a person with "press" on his clothing threw a 9-pound rock.

Police declined requests for an interview. In a June video, Lt. Tina Jones said Portland police "continue to work with our media partners about the importance of following the lawful orders given by the sound truck, officers and social media so they can stay safe and avoid arrest and altercation."

While many reporters clearly identify themselves, officials have discussed whether more can be done.

U.S. District Judge Michael Simon suggested redefining a journalist as "someone who is authorized by the ACLU," saying the organization "could maintain a list of who they are giving vests to and give them appropriate guidance and instructions. That way we might be able to solve the problem of somebody just putting 'press' on their helmet or their shirt."

News-media experts say it's broader than that.

"Who is a journalist and who isn't a journalist? Well, here is my definition: You are a journalist if you are committing journalism — if you are there at the scene of the news to collect information and present it to an audience in journalistic form," said Patricia Gallagher Newberry, national president of the Society of Professional Journalists.
___
Cline is a corps member for the Associated Press/Report for America Statehouse News Initiative. Report for America is a nonprofit national service program that places journalists in local newsrooms to report on undercovered issues.