The ICP-MS lab is available for use by professors and students from all MTSU science departments, as well as non-MTSU users. Along with the Department of Geoscience X-ray fluorescence lab, the ICP-MS lab offers a wide range of analytical capabilities. Both labs are staffed by Dep. of Geoscience faculty and students. All analytical expenses must be covered by each user. For more information on user fees, please contact Dr. Warner Cribb.

ICP-MS is an anlytical method capable of rapidly measuring the concentrations of almost all chemical elements in any geologic sample. ICPMS accomplishes this by counting the number of ions at a certain mass of the element. Standards are analyzed to generate a calibration curve and the signals from unknown samples are compared against the calibration curve to determine the concentration of each metal in the sample. ICP-MS can measure as many as 35 elements in a single sample in as little as three minutes. Detection limits for almost all isotopes are at the parts-per-billion level.

The ICP-MS consists of the following parts: 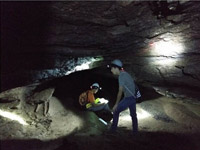 Click the image above to see a larger version.

Dr. Mark Abolins teaches a course about earthquakes and folded and fractured rocks (Geol 4080/5080 Structural Geology), a Field Methods in Geology course (Geol 3050), and an on-line course about caves (Geol 3040 Geoscience of Caves).  His research foci include (a) the development of caves within folded and fractured rocks, (b) the geology of continental interiors, and (c) the accuracy of geologic maps.  In the computer sphere, he uses geographic information system (GIS) software and Midland Valley MOVE structural geology software in teaching and research.  He has incorporated state-of-the-art local and global LiDAR (light detection and ranging) elevation datasets into his work.