Movement 68: A History of Black Student Activism at MTSU

In October 2018, the Albert Gore Research Center honored 50 years of Black student activism at MTSU with a program called Movement 68. The core of this program was a two-hour long panel discussion with six Black activists from different eras of the University's history dating back to the 1960s. The spirit of Movement 68 also informs the archival work at the Gore Center in addressing the archive's silences in documenting the Black history of MTSU and Rutherford County. You can read more about the archivists' redemptive model of labor in their History@Work blog post published to NCPH's website. This page is meant to briefly explain the history of Black student activism at MTSU.

PROTESTING THE CONFEDERACY ON CAMPUS

On October 21, 1968, Middle Tennessee State University’s student newspaper, Sidelines, published a guest column from Sylvester Brooks, a Black student from Memphis, Tennessee. Titled “Dixie: What Does It Mean?” Brooks asked the white student body why they continued to wave Confederate flags, sing the Dixie fight song, and pay homage to Confederate General and Ku Klux Klan leader Nathan Bedford Forrest. He addressed how these activities alienated Black students and, therefore, “should be banned and abolished.” He challenged white students to move forward with a New South that included everybody, which meant ridding the campus of Confederate symbols. As Brooks said, “You cannot seek a newer world while clinging so passionately to the relics of days long given to the past.”[1] 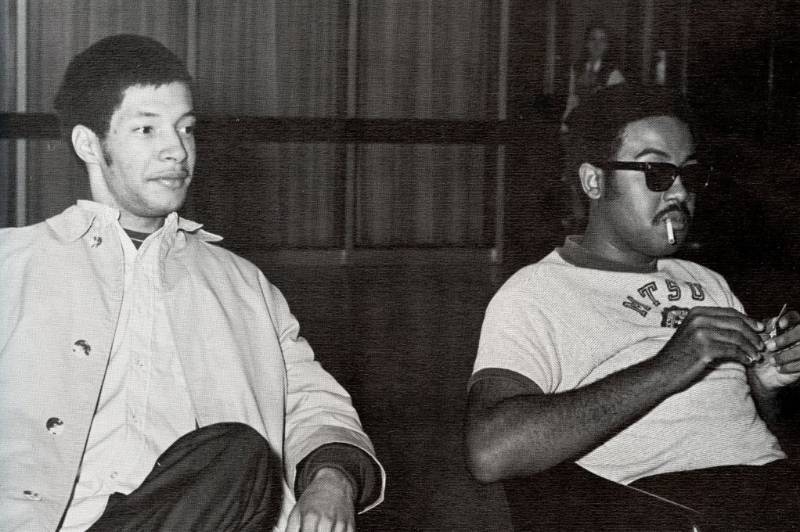 Brooks’ column caused contentious debate among the MTSU community. Sidelines published a series of letters from students and faculty that directly responded to Brooks’ arguments against the usage of Confederate symbols on campus.[2] For every person in support of Brooks’ ideas, there were just as many people against them. Over the next few years, Black students protested the university’s relationship with the Confederacy and Nathan Bedford Forrest. In December 1970, two crosses were burned on campus during a week of events sponsored by the Black Student Union. By 1971, the students’ persistence resulted in a couple of changes, including a new mascot and fight song for sporting events.[3] 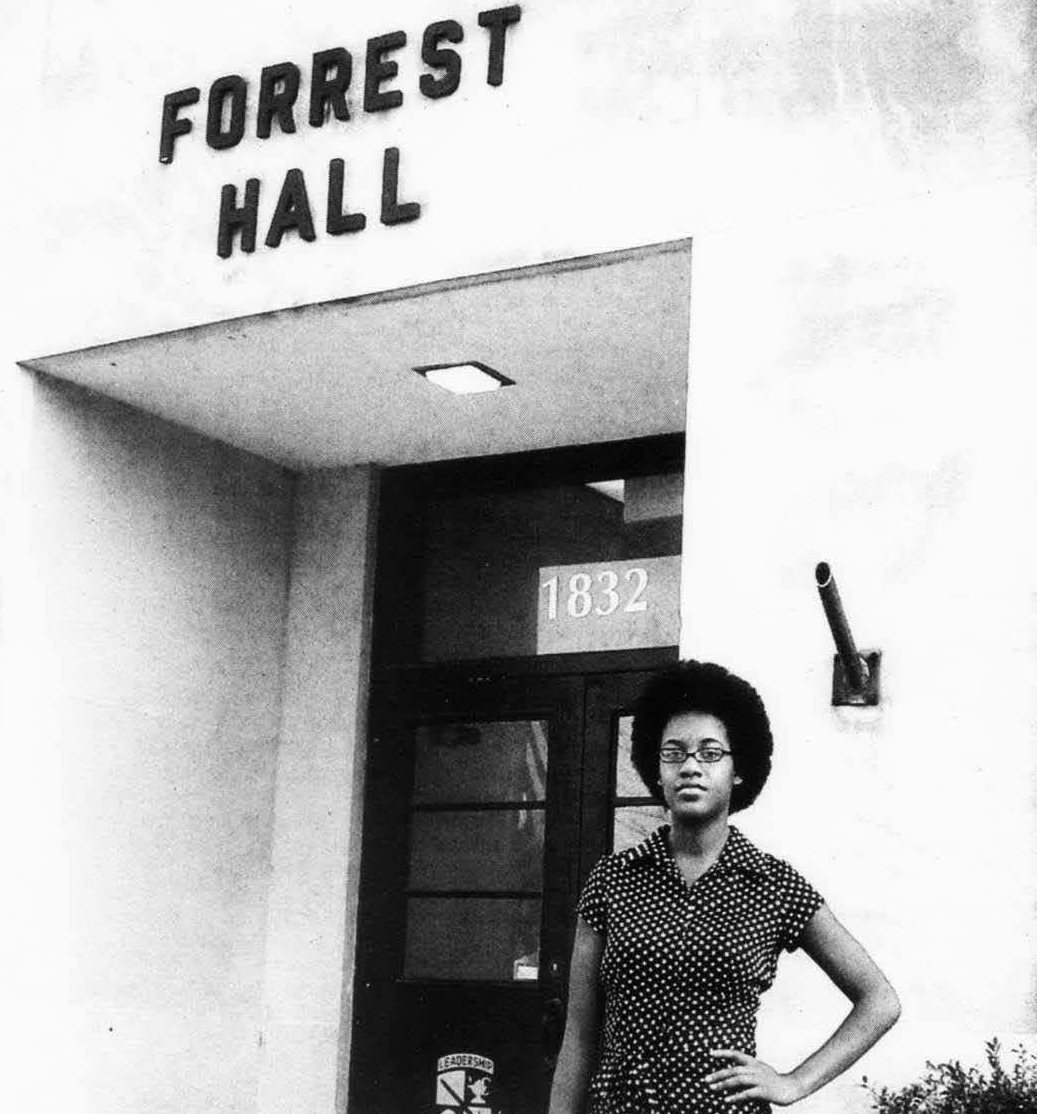 Since 1968, MTSU students have continued to protest against Confederate symbolism on campus. In the 1989-1990 academic year, the university’s NAACP student chapter succeeded in persuading the administration to remove the 600-pound bronze plaque of Nathan Bedford Forrest from the outside wall of Keathley University Center.[4] In 2006, Black students protested the name of the ROTC building, called Nathan Bedford Forrest Hall. The students, particularly protest leader Amber Perkins (pictured right), received guidance from Sylvester Brooks on how to handle the backlash from Murfreesboro’s white community and the university’s administration.[5] The university kept the building’s name until a new wave of activism began during the 2015-2016 academic year, which finally resulted in the administration’s decision to seek approval for a name change from Tennessee government entities. In the spring of 2016, the university's Forrest Hall Task Force approved a name change as well as the Tennessee Board of Regents. The final step is approval from the Tennessee Historical Commission working under the guidelines of the Tennessee Heritage Protection Act of 2013 (later amended in 2016 and 2018), which states that no piece of public property may be "removed, renamed, relocated, altered, rededicated, or otherwise disturbed or altered" without a two-thirds vote of approval from the Commission.

On February 16, 2018, after hours of cross-examination involving the Sons of Confederate Veterans, the Tennessee Historical Commission decided in a final vote to deny MTSU's request to rename Forrest Hall. The University decided to not appeal the decision. Today, Forrest Hall remains and students continue to protest and demonstrate their frustrations about white supremacy on campus. The latest protest outside Forrest Hall occurred on May 31, 2020 as part of nationwide demonstrations against police brutality and racism following the murder of George Floyd in Minneapolis, Minnesota.

Learn more about this movement from Calise's essay published in The Activist History Review called, "Protesting the Confederacy on Campus."

The Black Lives Matter (BLM) movement originated as a social media campaign founded by three Black women--Alicia Garza, Patrisse Cullors, and Opal Tometi--using #BlackLivesMatter in response to the acquittal of Trayvon Martin's murderer in 2013. The movement grew nationally when police murdered Michael Brown in Ferguson, Missouri and Eric Garner in New York City in 2014. Black Lives Matter is "an affirmation of Black folks' humanity, our contributions to this society, and our resilience in the face of deadly oppression."[1] Through various goals and tactics, activists in the BLM movement bring attention to the structural racism, white supremacist violence, and police brutality affecting Black people across the globe. There is a decentralized network of BLM chapters in nearly every major city in the United States, and their direct action work has become the largest Black-led protest movement since the Civil Rights Movement of the 1960s. Learn more about BLM founders, leaders, and protests from Black Lives Matter and BlackPast.

MTSU students have conducted nonviolent protests as part of the Black Lives Matter movement. In the fall of 2016, students held a series of silent demonstrations in front of Forrest Hall and the library to bring awareness to racism on campus and the larger BLM movement. They also held public gatherings on the lawn by the Student Union Building to provide a space for informal discussions about discrimination on campus. 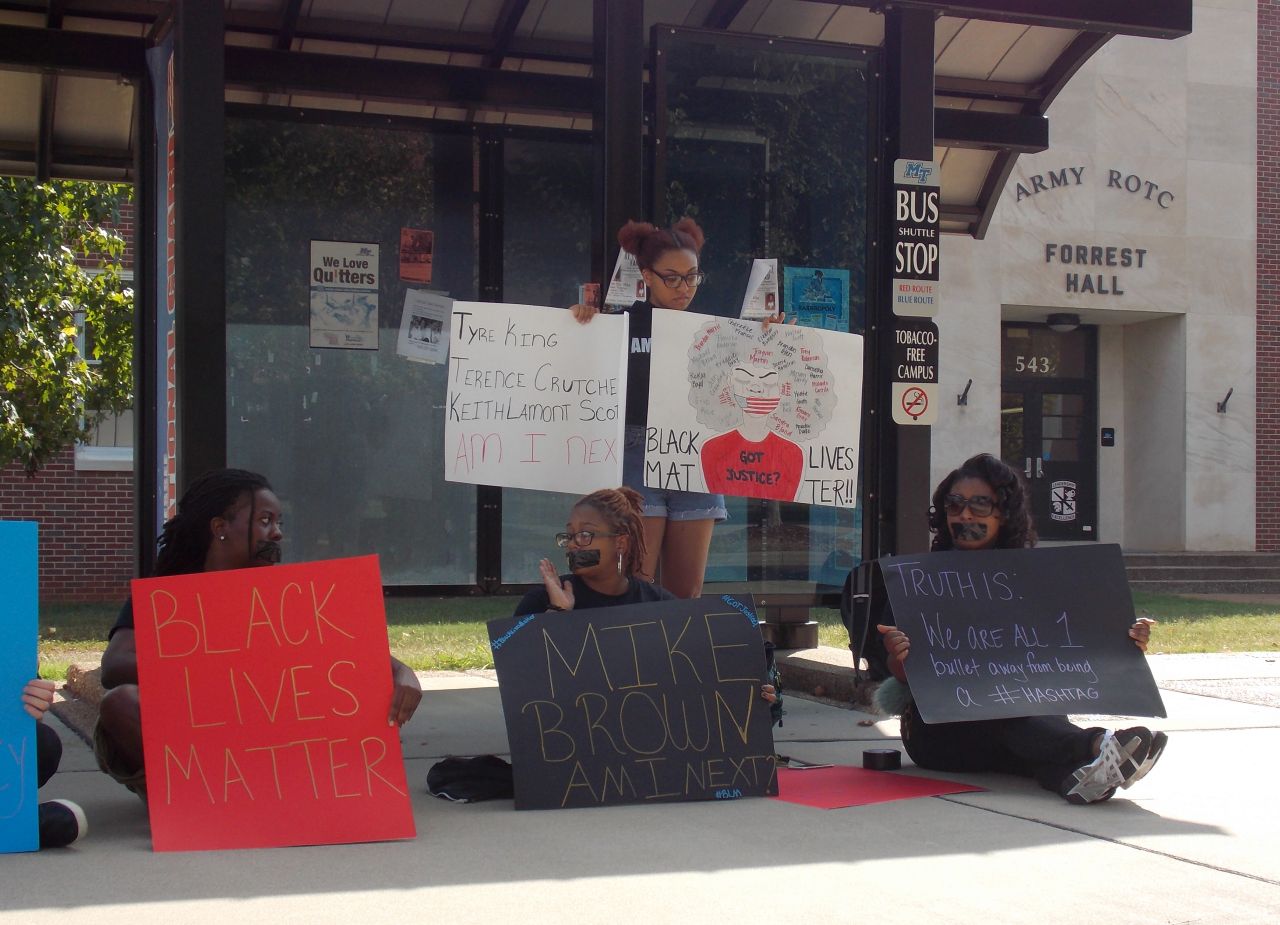