Politics and Music in Tennessee - The Rest of the Story

There are a number of other interesting connections between music, musicians, and politics in Tennessee. In 1886, the Taylor Brothers, Bob and Alf, faced each other in the race for governor of Tennessee. The campaign was famously remembered as the “War of the Roses” for the white rose that Bob’s supporters wore and the red rose that was the symbol for Alf’s campaign. Bob Taylor won the race and ultimately spent three terms as governor of Tennessee. Both of the Taylor brothers were fiddlers and they each used the instrument to get their supporters excited.

Here is a contemporary illustration of the Taylor’s “fiddling for votes.” 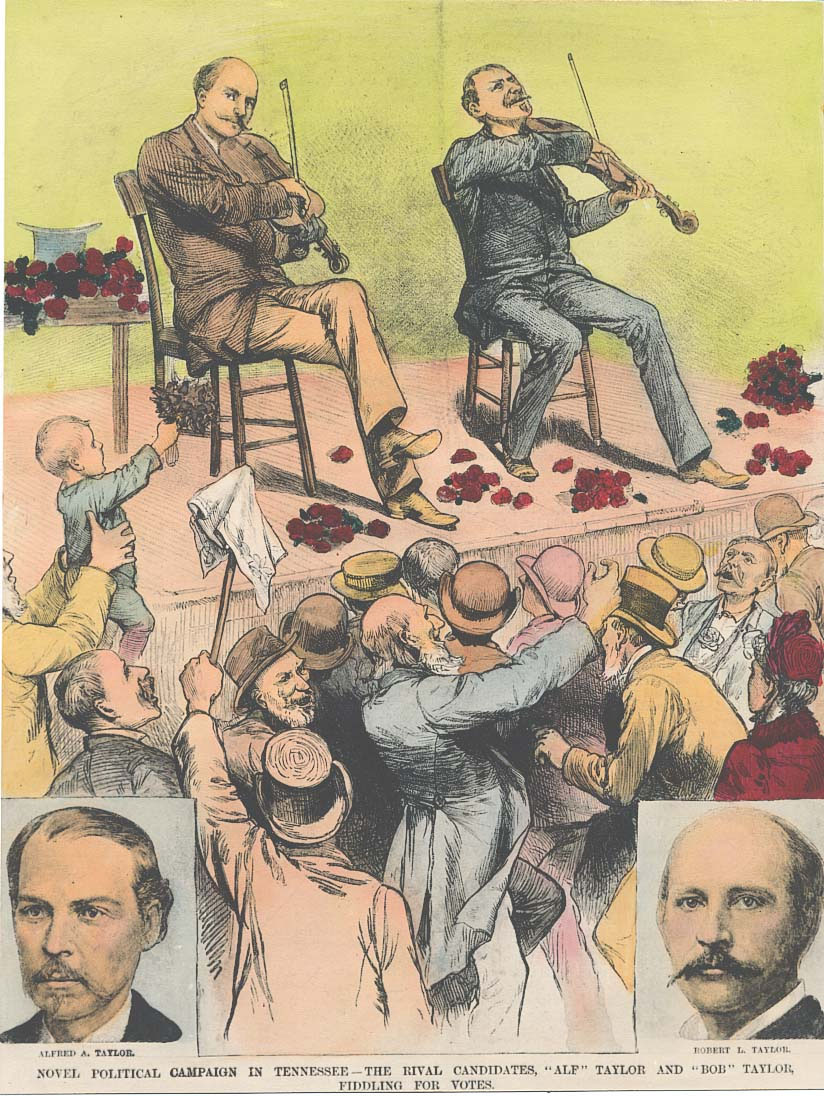 Alf Taylor later made some recordings of his fiddling and singing for the Victor label in 1924. 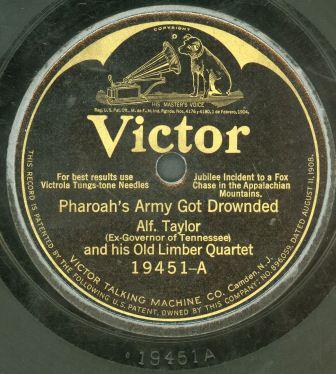 To listen to "Pharoah's Army Got Drownded," click here.

To listen to "Brother Noah Built an Ark," click here.

Edward “Boss” Crump was one of the most powerful and controversial political figures in the history of Tennessee. Crump held a variety of political positions such as U.S. Congressman and perhaps most famously as the mayor of Memphis. While Crump himself was not a musician, he enjoyed music and Crump’s name is associated with a number of well-known Memphis area musicians. The first published blues song, “Boss Crump,”was written by W.C. Handy as a campaign song for Crump’s run for mayor. The tune was later known as the “Memphis Blues.” Crump’s name is referenced in other blues songs such as Frank Stokes “Mr. Crump Don’t Like It.” 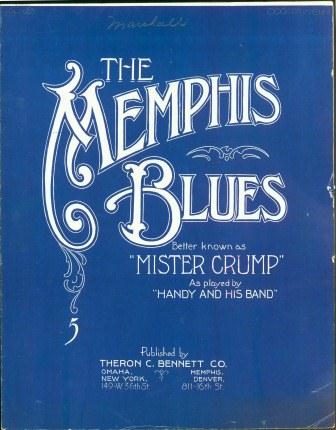 The Memphis Jug Band was a favorite of Crump’s and they were often featured at his parties and rallies. This photo, from LIFE magazine, shows the Memphis Jug Band entertaining guests on a gambling train trip hosted by Crump in 1940. 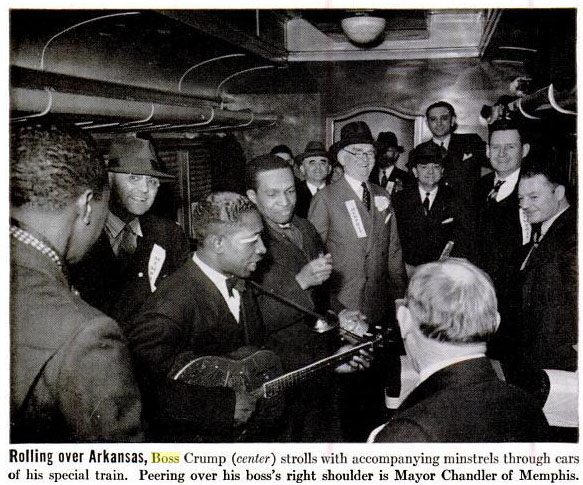 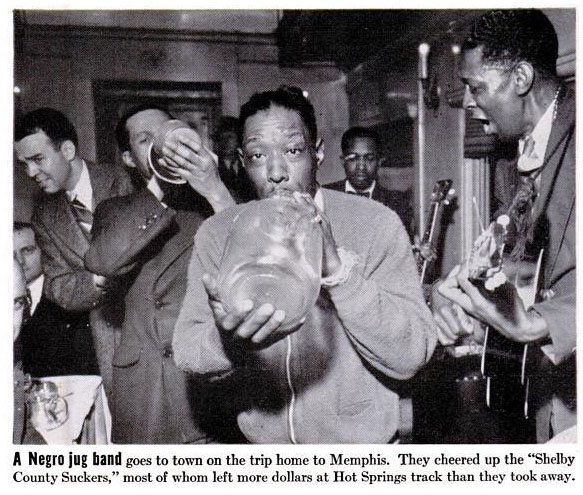 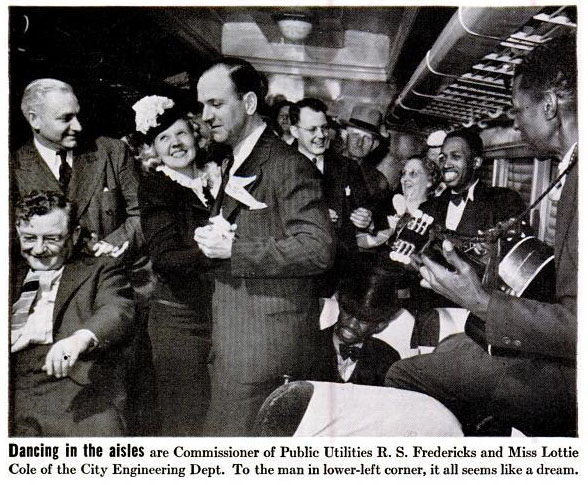 In 1938, after a stint as the Tennessee Commissioner of Labor, Albert Gore ran for Congress after a seat in his home district became available. An enthusiastic amateur fiddler, he took his violin out on the campaign trail to add some excitement to his stump speeches. Gore and his fiddle band even managed to land a performance at the 1938 National Folk Festival where he and his group were recorded for the Library of Congress. The novelty of his fiddle playing along with some very generous campaign contributions helped him win his seat in Congress.

Over the years, a number of established musicians have tried their hands at politics in Tennessee. One of the best known examples of this is Roy Acuff and his ill-fated run for governor of Tennessee against Gordon Browning in 1948. Acuff ran his campaign based mostly on his reputation as a popular country music performer. Acuff drew good crowds at his stump speeches but the audience had come to the events hoping to hear him sing and play rather than deliver campaign speeches. On voting day, Acuff managed to collect a respectable amount of votes (over 150,000) but he was still beaten by Browning.

Here are some news clippings from Acuff’s run for governor: 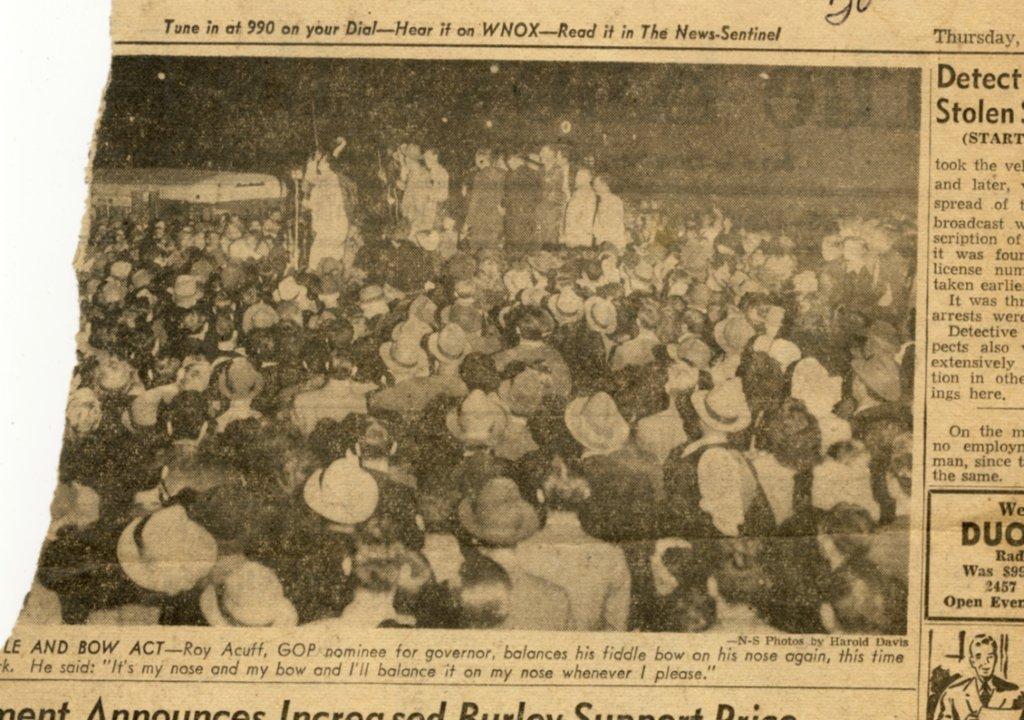 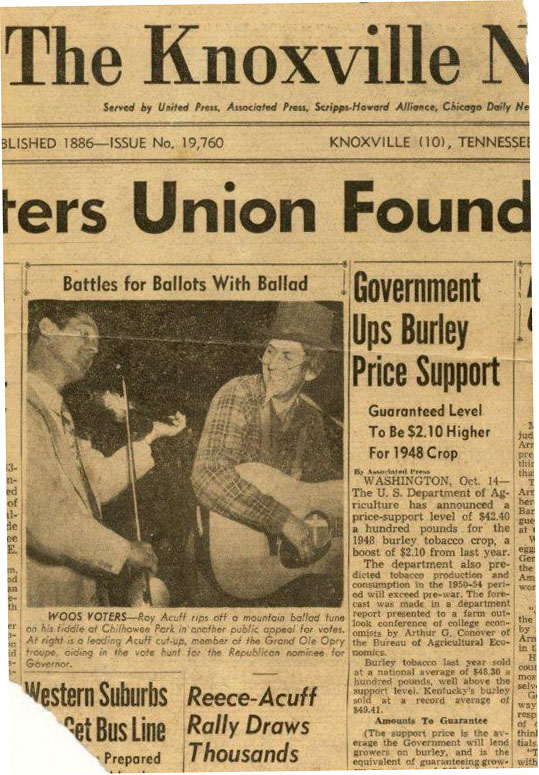 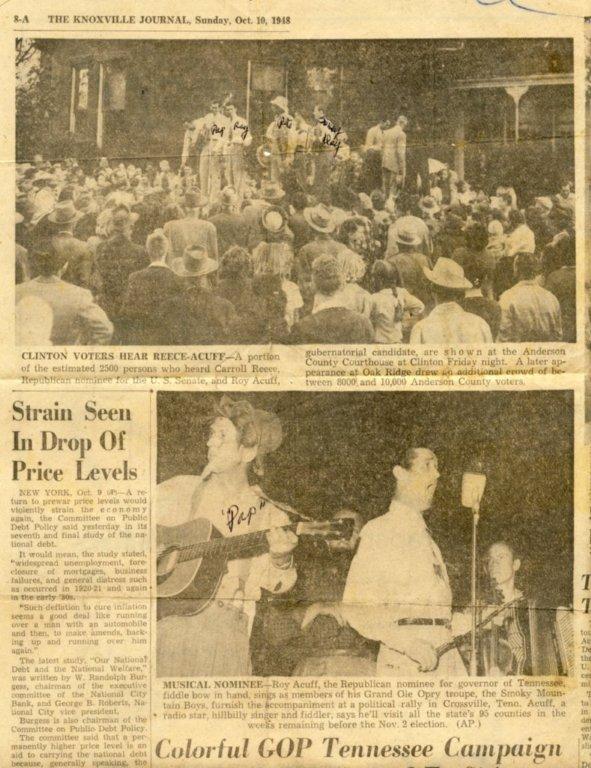 In 1992, country singer and Grand Ole Opry member Charlie Walker made an unsuccessful run for the Tennessee state senate. 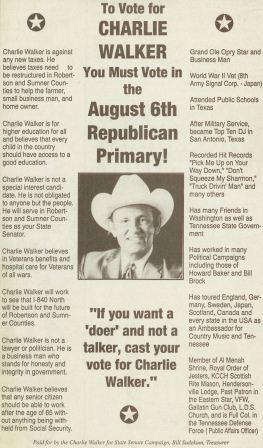 The Nashville studio system was a center of jingle writing and recording. Stars such as Charlie Louvin were employed to sing and play on political ads and the jingle business was active enough that it received attention in Billboard Magazine a number of times over the years. This article describes the writing and recording of the Democratic theme song for the 1972 election. 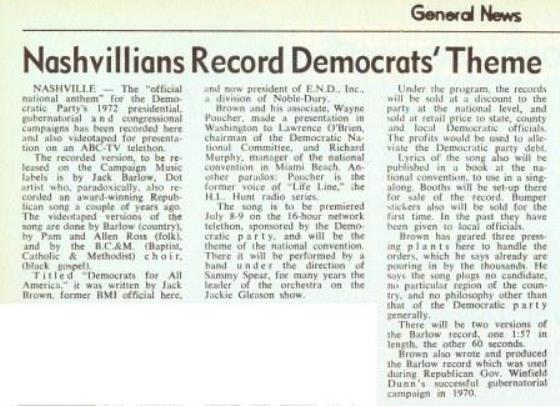 The Evolution of Political
Jingles in Tennessee