It will discuss about some of our recent results on population network models. For single species models, we consider the monotonicity of the spectral bound of a class of matrices, which measure the growth rate of the population when the size is small; we study the distribution of resources that maximize the total population in stream environment. For two species competition models, I will present a result that classifies the global dynamics of the model under some assumptions on the network structure.

This talk will discuss recent work, joint with a number of collaborators, on analytic and combinatorial properties of the partition and related functions.  This includes work on recent conjectures of Stanton, which aim to give a deeper understanding into the "rank" and "crank" functions which "explain" the famous partition congruences of Ramanujan. It will describe progress in producing such functions for other combinatorial functions using the theory of modular and Jacobi forms and recent connections with Lie-theoretic objects due to Gritsenko-Skoruppa-Zagier. It will also discuss how analytic questions about partitions can be used to study Stanton's conjectures, as well as recent conjectures on partition inequalities due to Chern-Fu-Tang and Heim-Neuhauser, which are related to the Nekrasov-Okounkov formula.

There has been extensive research on approximating TSP walks in subcubic graphs.  We show that if G is a 2-connected simple subcubic graph on n vertices with n_2 vertices of degree 2, then G has a TSP walk of length at most 5n/4 + n_2/4 - 1, establishing a conjecture of Dvorak, Kral' and Mohar.  This upper bound is the best possible.  Our proof implies a quadratic-time algorithm for finding such a TSP walk, thereby giving a (5/4)-approximation algorithm for the graphic TSP on simple cubic graphs and improving on the previously best-known approximation ratio of 9/7. This is joint work with Youngho Yoo and Michael Wigal. 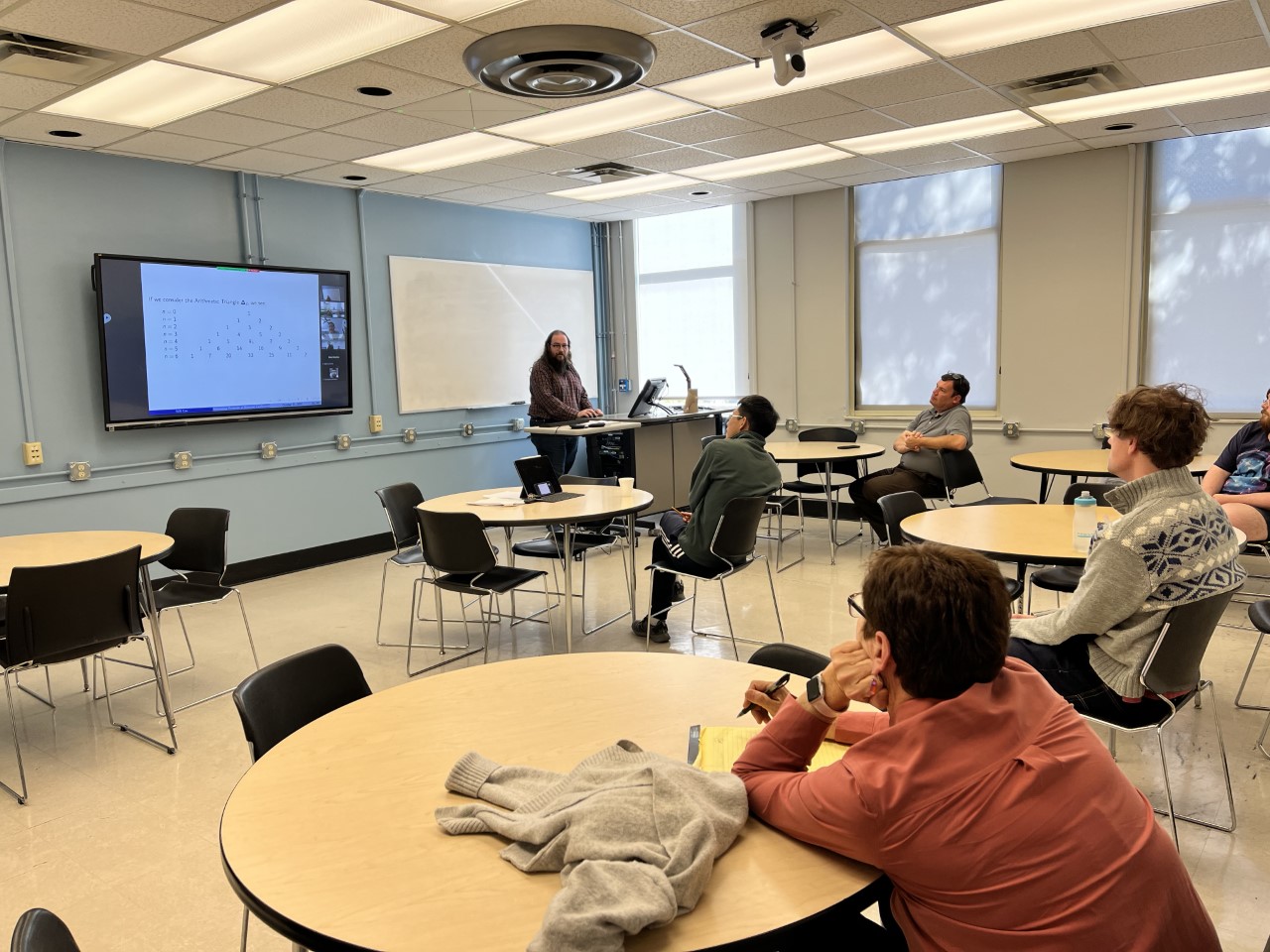 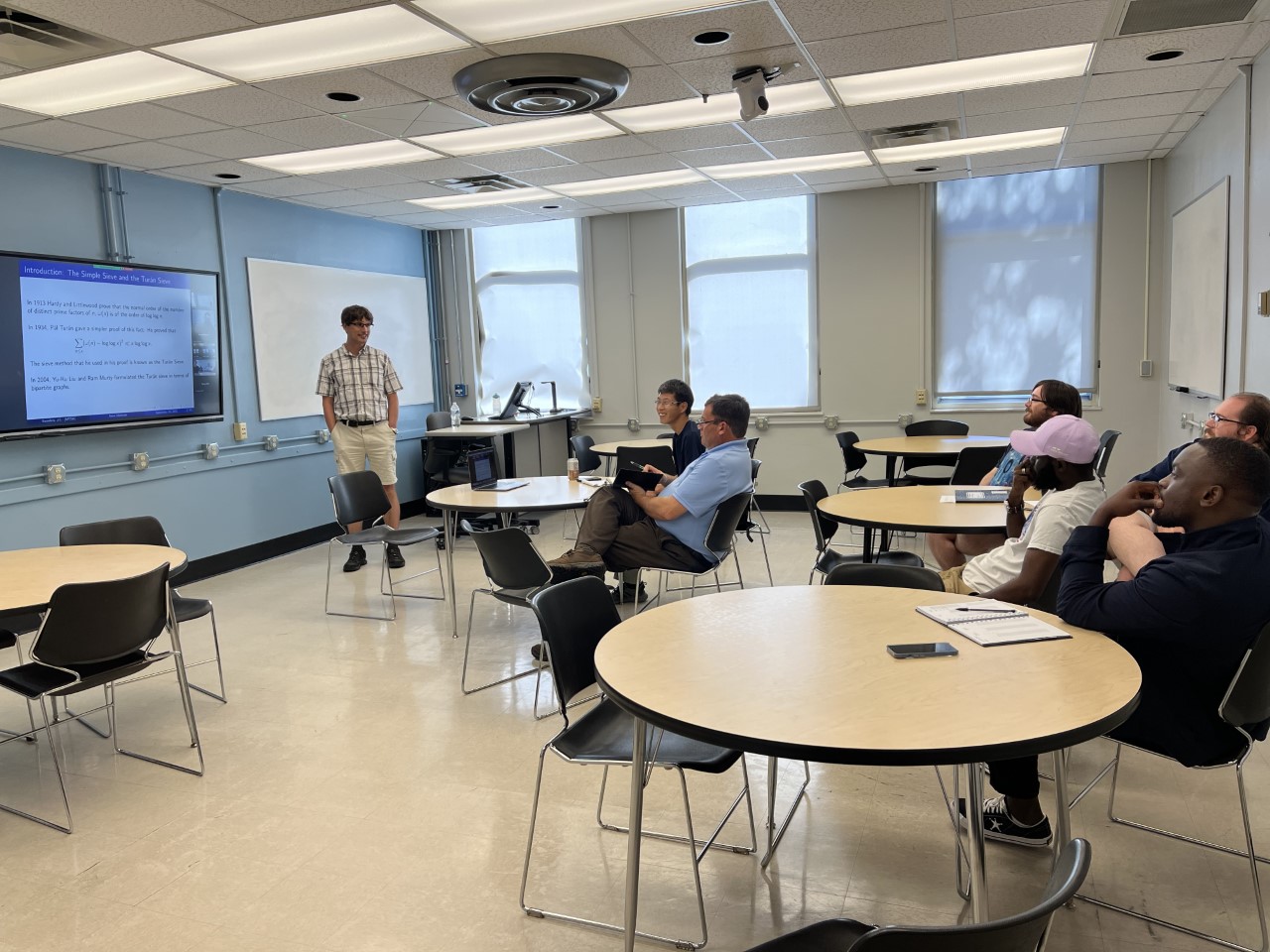 In this talk, we introduce the Turan sieve, which was first developed by Pal Turan to give a simpler proof of the Hardy and Ramanujan result on the normal order of the number of prime factors of a positive integer. The Turan sieve and its complement the simple sieve were developed further by Ram Murty and Yu-Ru Liu to problems in combinatorics. We apply the Turan sieve and the simple sieve here to examine the diameter of a random graph. In particular, we obtain upper and lower bounds on the probability of a random graph on n vertices having diameter d for some d >= 2 with edge probability p, where the edges are chosen independently. An interesting feature revealed in these results is that the Turan sieve and the simple sieve "almost completely" complement each other. This result recovers an asymptotic result on the diameter of a random graph by Bela Bollobas, as well provide concrete upper and lower bounds for n and p (the number of vertices and the edge probability in the random graph in question respectively) in certain ranges.

Embeddings with faces bounded by Euler circuits arise in several situations, such as building DNA models of graphs that can be scanned easily, and finding maximum genus orientable directed embeddings of digraphs.  We discuss results on the existence of such embeddings.  First, graphs where all vertices have degree congruent to 2 mod 4 have an orientable embedding with two Euler circuit faces.  Second, n-vertex eulerian graphs where all vertices have at least (4n+2)/5 distinct neighbours also have such an embedding.  We discuss some of the ideas used in the proofs of these results and some extensions and related results.  This is joint work with Jo Ellis-Monaghan.