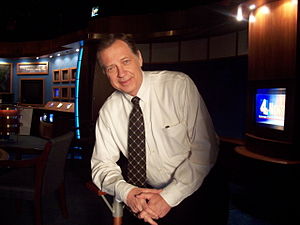 •Dan Miller is perhaps best known for his work at WSMV, Channel 4 in Nashville, and was one of Tennessee's premier broadcasters before his passing in 2009. He was the recipient of multiple Emmy Awards, including being the first on-air personality to win the prestigious Governor's Award for lifetime achievement.

•Prior to working in Nashville, Miller worked at stations in his hometown of Augusta, Ga., and in Columbia, S.C.

•Miller was voted Best News Anchor in Nashville more than 20 times in local publications, and in 1986, he was recognized by Television/Radio Age as the Most Popular News Anchor in the United States. •He first came to Channel 4 as a weathercaster in 1969, and moved to the news anchor desk in 1970.

•He later moved to the CBS Entertainment Division, and joined his friend and WSMV colleague Pat Sajak on the late-night "Pat Sajak Show."