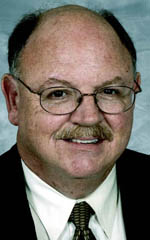 For outstanding service to journalism in Tennessee, FRANK GIBSON is inducted into the 2018 class of the Tennessee Journalism Hall of Fame.

In his 52-year media calling Frank has completed not one, not two, but three different careers.

Frank spent more than 40 years as an award-winning reporter and editor at the Nashville Tennessean, beginning work there a mere four months after high school graduation. He covered local, state and national politics, winning awards from the Associated Press, United Press International, and the Society of Professional Journalists Green Eyeshade award.

In 2003 he helped oversee the founding and operation of the Tennessee Coalition for Open Government, and some 15 years later still serves on the T-COG board of directors.

In his third career, Frank served six years as the public policy director for the Tennessee Press Association where he represented more than 120 newspapers before the Tennessee General Assembly.