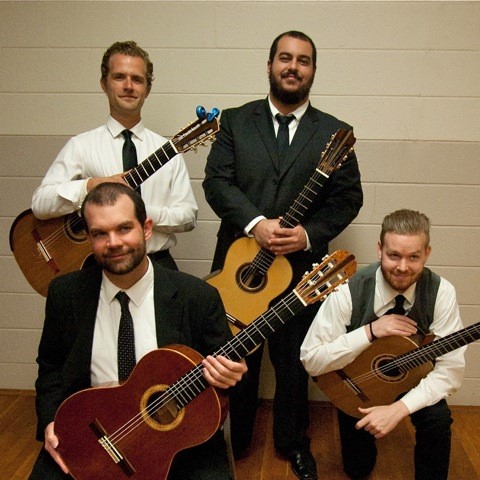 The MTSU Guitar Quartet performed music from the Renaissance and Baroque to contemporary American and Latin Music.  Music of Praetorius, Telemann, Andrew York, Paulo Bellinati and more.     The quartet members, Brad Poe, Ryan Jerzak, Alex Saber, and Jacob Miears are 4 of the finest classical guitarists in the state.  The quartet was featured in concert at the spring '15 MTSU School of Music Honors Assembly.  Brad Poe received his BM in Guitar Performance from MTSU and is presently Adjunct Professor of Guitar at MTSU. Ryan Jerzak is completing his BM in Music Composition at MTSU and is one of the area's busiest guitar teachers with 40 private students.  Jacob Miears is MTSU's top senior Guitar Performance major and has received 2 undergraduate research awards for guitar scholarship. Alex Saber received his BM in Guitar Performance from Belmont University and was awarded a Graduate Assistantship in guitar at MTSU.

Graduate student, Jacob Hendley, was invited to perform at Millsaps College in Jackson, MS on Thursday, Oct. 8 and give a masterclass to the guitar students on Oct. 9. The recital program will include works by Dowland, Tarrega, Piazzolla and more. It will be recorded by Millsaps. (Sept. 2015)

MTSU Vocalist Rise to the Top at TN State Chapter of the National Association of Teachers of Singing Student Audition (Oct. 2014)

Four MTSU students were top winners at the TN State Chapter of the National Association of Teachers of Singing Student (NATS) Auditions held Oct. 4 at the University of Tennessee at Martin.

Additionally, Stripling and Bumpas were selected to sing the preceding day for master classes with Dr. Thomas Jaber, collaborative pianist, coach, and choral director, from The Shepherd School of Music at Rice University.

09/16/2014 - DJ Creech won the Second Trumpet Position in the Knoxville Symphony Orchestra. Apparently, as is always now, it was stiff competition and the audition consisted of three or four rounds. DJ completed his masters degree here at MTSU in May of 2013. He took the 2013-2014 year off of school and freelanced. He joined me many times over the past few years at my request in the Huntsville Symphony. He also joined me in performances this past May at the International Trumpet Guild Conference and played skillfully and beautifully for a packed house. He had  just started a doctorate at the University of Georgia studying with the recently retired Principal Trumpet of the New York Philharmonic, Phil Smith.

Jack Lorens, a freshman music major in MTSU's School of Music, is one of 6 Semi-Finalists advanced in the prestigious Leonard Falcone Euphonium Competition, Student Division. The semi-finals will be held August 8-11, 2014 at the Blue Lake Fine Arts Camp in Twin Lake, Michigan. Please join me in celebrating Jack's accomplishment. (May 2014)

On April 4 and 5, over 400 students competed at the Regional National Association of Teachers of Singing Competition at Blair School of Music. MTSU had three winners at the event. Collin Peterson, Elizabeth Stripling and William Duke won in the categories of Freshman Men, Underclass Musical Theatre and Junior Men. Kayla Holt, Elizabeth Bumpas and Ciera Cope were also selected as semi-finalists for the two-day event.

FLUTE NEWS Spring 2014: Senior, Shannon Moore, was chosen as a winner for the 2014 Mid-South Flute Festival College master class Competition and will perform for Goran Marcusson this coming march. Alumni & adjunct faculty, Abi Coffer, is the WINNER of the 2014 Kentucky Flute Festival (last weekend). Senior, Anna Laura Williams, was one of 5 finalists chosen for the 2014 Florida Flute Fair Collegiate Artist Competition. Senior, Shannon Moore, was selected as a finalist for the 2014 Delta Symphony Concerto Competition. Anna Laura Williams won 3rd place at the 2014 florida Flute Fair Collegiate Artist Competition. Both Shannon Moore (current senior) and Roya Farzaneh (2012 BM Perf grad) have by been accepted to study in England next year with esteemed flutist, Trevor Wye. He takes six students into his course.