Over the course of a night, the constellations appear to move across the sky from east to west. However, ancient sky-watchers noted that the relative positions of stars remained unchanged as this nightly march took place. It was natural for those first astronomers to conclude that the stars were attached to a celestial sphere surrounding Earth—a canopy of stars like an astronomical painting on a heavenly ceiling. Figure P.2 shows how early astronomers pictured the stars as moving with this celestial sphere as it turned around a fixed, unmoving Earth. In reality stars appear to move in circles around a point in the sky very close to the star Polaris (better known as the Pole Star or the North Star). To the ancients, this point represented the axis around which the celestial sphere turned. 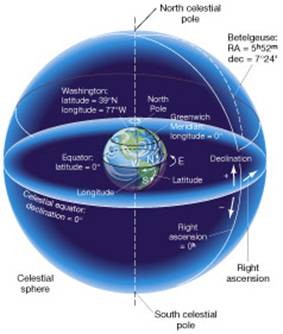 Declination (dec) is measured in degrees (°) north or south of the celestial equator, just as latitude is measured in degrees north or south of Earth’s equator. Thus, the celestial equator is at a declination of 0°, the north celestial pole is at +90° and the south celestial pole is at -90° (the minus sign here just means “south of the celestial equator”). Right ascension (RA) is measured in angular units called hours, minutes, and seconds, and it increases in the eastward direction. Like the choice of the Greenwich Meridian as the zero-point of longitude on Earth, the choice of zero right ascension is quite arbitrary—it is conventionally taken to be the position of the Sun in the sky at the instant of the vernal equinox (to be discussed in the next section). 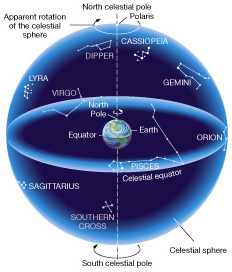 Because Earth revolves around the Sun, our planet’s darkened hemisphere faces in a slightly different direction each night. The change is only about 1° per night—too small to be easily discerned with the naked eye from one evening to the next. However, the change is clearly noticeable over the course of weeks and months. In six months Earth moves to the opposite side of its orbit, and we face an entirely different group of stars and constellations at night. Because of this motion, the Sun appears, to an observer on Earth, to move relative to the background stars over the course of a year. This apparent motion of the Sun on the sky traces out a path on the celestial sphere known as the ecliptic. The 12 constellations through which the Sun passes as it moves along the ecliptic—that is, the constellations we would see looking in the direction of the Sun if they weren’t overwhelmed by the Sun’s light—had special significance for astrologers of old. They are collectively known as the zodiac.

The ecliptic forms a great circle on the celestial sphere, inclined at an angle of about 23.5° to the celestial equator. In reality, as shown in the next Figure, the plane defined by the ecliptic is the plane of Earth’s orbit around the Sun. Its tilt is a consequence of the inclination of our planet’s rotation axis to its orbital plane.

The point on the ecliptic where the Sun is at its northernmost point above the celestial equator (see Figure) is known as the summer solstice (from the Latin words sol, meaning “sun,” and stare, “to stand”). It represents the point on Earth’s orbit where our planet’s North Pole is oriented closest to the Sun. This occurs on or near June 21—the exact date varies slightly from year to year because the actual length of a year is not a whole number of days. As Earth rotates on that date, points north of the equator spend the greatest fraction of their time in sunlight, so the summer solstice corresponds to the longest day of the year in Earth’s Northern Hemisphere and the shortest day in Earth’s Southern Hemisphere.

Six months later the Sun is at its southernmost point below the celestial equator—or, equivalently, the North Pole is oriented farthest from the Sun (see next Figure). We have reached the winter solstice (December 21), the shortest day in Earth’s Northern Hemisphere and the longest in the Southern Hemisphere. 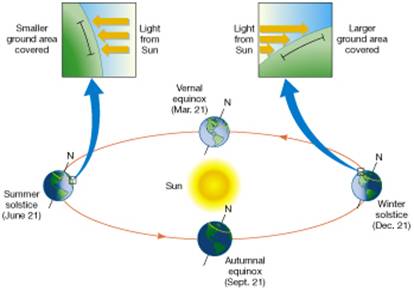 The two points where the ecliptic intersects the celestial equator —that is, where Earth’s rotation axis is perpendicular to the line joining Earth to the Sun —are known as equinoxes. On those dates, day and night are of equal duration. (The word equinox derives from the Latin for “equal night.”) In the fall (in Earth’s northern hemisphere), as the Sun crosses from the northern into the southern celestial hemisphere, we have the autumnal equinox (on September 21). The vernal equinox occurs in spring, on or near March 21, as the Sun crosses the celestial equator moving north. The vernal equinox plays an important role in human timekeeping. The interval of time from one vernal equinox to the next—365.242 solar days—is known as one tropical year.