When we arrived at the spot for our archaeological investigations in early June, it was relatively unimpressive -- a stand of mature pine trees with some undulations and a few rises here and there. However, we all knew that prior limited investigations by staff of the Tennessee Division of Archaeology had discovered soil features indicating the possible presence of several massive mounds constructed by human efforts nearly two centuries ago.

We began our project by setting up a coordinate grid system to match the units excavated in the prior couple of years by Division of Archaeology staff. The experienced staff -- Mr. Mark Norton of the Tennessee Division of Archaeology and Mr. David Michaels of the University of the South -- worked with students to set up the grid and make the appropriate 3-dimensional measurements to record our work. Establishing a grid system for recording information is the first -- and perhaps most important -- step in any archaeological project. We made extra efforts above and beyond the normal careful and cautious archaeological record-keeping for this project -- as a National Historic Landmark and one of the most important archaeological sites in the nation, Pinson Mounds required very special consideration and concern by all of us.

A short distance beneath the surface of the pine orchard, we immediately began encountering evidence of some major prehistoric earth-moving activities -- and indications that the existing trees in the pine orchard were having a slow but deleterious impact on the evidence left by these ancient Native Americans. Most of the roots from the pine trees were shallow but large -- spreading and slowly disturbing the evidence left behind by prehistoric Native Americans. The distinctive soil color differences are remains of different colored soils brought to construct sacred mounds by Native Americans almost 2000 years ago.

Almost immediately beneath the area disturbed by modern activities on the site, we started to find well-preserved evidence of mound construction activities. The multi-colored soil stains shown in these photos were almost immediately evident as representing basketloads of soil brought to the location by Native Americans building something important to them in terms of sacred ceremony and ritual -- and important to us in our search to discover the archaeological remains of their efforts.

As our excavations continued and expanded, the evidence accumulated that we were working on a very large and extensive platform intentionally constructed by humans in the distant past. Everywhere we looked, evidence of basketloads of earth brought to construct something important appeared just beneath the area disturbed by modern use of the tract. While the modern use of the area as a pine orchard was far less destructive than many other possible uses -- such as intentive agricultural plowing or building a convenience store -- it was still slowly destroying the upper parts of something built perhaps 1800 years ago. Everyone -- staff and students alike -- experienced the same "sense of awe" to discover that only a few inches beneath the surface, the labors of ancient Native Americans were revealed. 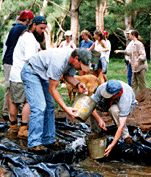 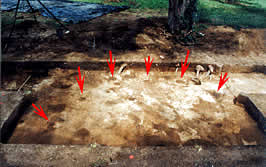 Our excavation areas were tightly covered with heavy plastic at the close of each day to protect the sensitive sand layers and exposed features from damage by the relatively frequent downpours. While serving its purpose well, the plastic also held hundreds of gallons of water when we returned on many mornings -- the crew quickly learned the skills of the "bucket brigade" to remove water from the tarps and dispose of it safely away from the excavation areas. We moved very slowly and cautiously with our investigations -- knowing that there might be ancient "activity surfaces" on a mound of this type. For most of our excavation units, we removed only the upper zones of soil disturbed by modern activities. Our investigations were complicated by the basketloading fill of the mound -- we were looking for evidence of postholes, hearths, and other special features that might be associated with a ceremonial mound of this type. Unfortunately, the top of a dumped "basket" of earth looks very similar to the top of a posthole or other feature. As the image above shows -- our caution paid off. We found a very nicely preserved puddled clay hearth on one surface of the mound. Still filled with ashes from a fire probably 1800 years ago, this feature was only discovered through the very careful work of students on the project.

In addition, we found a large number of features that appeared -- at first -- to be the tops of postholes. The image above shows some of these that appeared to be remnants of a round building. Prehistoric Native Americans built a variety of types of structures associated with ceremonies on the tops of mounds -- often the only evidence remaining of those structures are the holes they dug to place wooden posts. At each level of the broader excavations, we found things that looked like possible postholes, but could have been the tops of basketloads of earth used to build the mound. Each one of these had to be investigated very carefully to determine what it actually might have been. 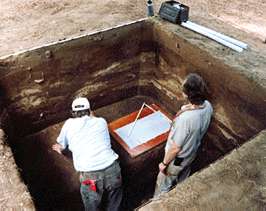 As the image above shows, each of these features was cross-sectioned -- the darker soil in the center of the photograph penetrating the soil layers of the mounds clearly indicates a hole that was dug at some later point.

Eventually, we investigated a whole series of possible postholes on the last surviving surface of this mound -- some proved not to be apparent postholes but others did seem to be. We think that perhaps we found evidence of a round structure on this mound surface -- but more excavation would be needed to confirm this hypothesis. Given the scope and nature of our project, we were reluctant to pursue excavations any deeper than this in this area -- we didn't want to destroy important features that might be investigated further in the future.

Just south of the excavation area, we suspected the presence of another mound -- possibly a mortuary mound similar to one excavated in the 1980s. In order to gather some information on the subsurface deposits in this area, we were fortunate to have the services of Dr. Berle Clay. He conducted both a magnetometer and conductivity survey of the suspected mound area -- revealing patterns that provide some support for our interpretation of the area. Although some additional archaeological testing would be needed to "ground truth" the interpretations of the results of these near-surface geophysical techniques, the results clearly showed the potential of the techniques to help interpret an enormous site like Pinson Mounds in a cost-effective and non-destructive fashion.

Our excavation season also coincided with the timing of the annual meeting of the Mid-South Archaeological Conference -- Mark Norton and I hosted the conference at Pinson Mounds as part of our cooperative project. Students were able to meet and interact with a number of archaeologists from across the Mid-South region. As shown at right, several conference participants toured the excavations as part of the conference and provided helpful comments and interpretations.

At the close of the field school, we had accomplished our primary goal -- to demonstrate that the pine orchard contained extremely important archaeological remains. Plans to clearcut and replant the orchard were put on indefinite hold as a result of this new information . While our project generated many more questions than answers about the complexity and nature of Pinson Mounds, we closed our investigations carefully to protect the site. Since we did not want to bring heavy equipment into the area of the mounds, the excavation units were backfilled by hand -- not a pleasant task in the steamy heat of early July in West Tennessee.