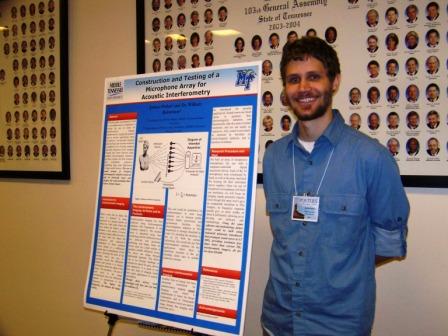 Joshua Parker, Physics major and URSCA Scholar, presents his research in Nashville in February, 2009 to his state representatives and senators.

Research Project:
Constructing and Testing of a Microphone Array for Acoustic Interferometry

Here we describe the construction of a microphone array to test the use of sound for acoustic interferometric imaging. Interferometric imaging has practical used in security applications where it's ability to "see through"; materials and into bags and suitcases would be a valuable tool for locating weapons and other dangerous items, or creating "chemical fingerprints"; for the detection of chemicals used in explosives. It uses waves with an array of detectors. Viable Interferometric Imaging Systems have been achieved using terahertz electromagnetic radiation, but these systems are both complex and exorbitantly expensive. The use of sound, however, would not only be drastically easier and cheaper, but could potentially illicit clearer, sharper images. Using 24 simple electret microphones and a high quality speaker, we constructed a portable array and power supply that will be integrated electronically with an IOTech data acquisition card.