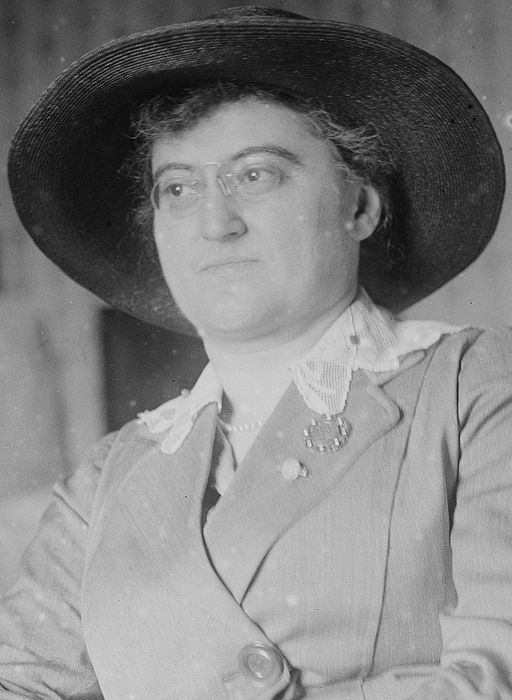 Rosika Schwimmer was denied U.S. citizenship because she responded on a form asking if she would be willing to take up arms in defense of the country that she "would not take up arms personally." The Supreme Court upheld the decision, but in a historic dissent, Justice Oliver Wendell Holmes Jr. emphasized the importance of toleration for dissident political speech which has become a central principle for much First Amendment thought. (Photo of Schwimmer is part of the George Grantham Bain Collection at the Library of Congress, public domain).

In United States v. Schwimmer, 279 U.S. 644 (1929), the Supreme Court ruled that a pacifist who said she would not bear arms to defend the United States could be denied naturalization as a citizen.

The case featured a historic dissent by Justice Oliver Wendell Holmes Jr., which emphasized the importance of toleration for dissident political speech. Holmes’s statement has since become a central principle for much First Amendment thought.

Feminist, pacifist Schwimmer denied citizenship after saying she would not take up arms

In 1921 she fled political persecution in Hungary and moved permanently to the United States, where her views engendered press scrutiny. In September 1926, she applied for naturalization. Statutes at the time required that applicants be “attached to the principles of the Constitution” and take an oath to defend the United States “against all enemies, foreign and domestic.”

Asked on a form if she were “willing to take up arms in defense of this country,” Schwimmer replied that “I would not take up arms personally.” Federal officials, likely lobbied by the Women’s Auxiliary of the American Legion, denied her naturalization petition. A series of cases eventually brought Schwimmer before the Court. Olive Rabe, Chicago’s leading feminist attorney, argued Schwimmer’s case.

Writing for the majority, Justice Pierce Butler insisted that Schwimmer’s refusal to take up arms disqualified her for citizenship. Butler deemed irrelevant the fact that Schwimmer, a 52-year-old woman, was unlikely to be included in any military force. It was the principle of willingness that mattered, particularly since pacifists’ influence “is apt to be more detrimental than their mere refusal to bear arms.”

Likewise, Schwimmer’s claim of a “cosmic sense of belonging to the human family” suggested to Justice Butler that she was “without any sense of nationalism” and was thus “incapable” of allegiance to the United States.

In his dissent, Holmes, joined by Justice Louis D. Brandeis, disagreed. He pointed out that Schwimmer “would not be allowed to bear arms if she wanted to” and rejected the idea that pacifism disqualified her for citizenship.

“Surely it cannot show lack of attachment to the principles of the Constitution that she thinks it can be improved,” wrote Holmes in one of his more famous statements. At the end of his dissenting opinion, Holmes offered another memorable aphorism: “[I]f there is any principle of the Constitution that more imperatively calls for attachment than any other,” he wrote, “it is the principle of free thought — not free thought for those who agree with us but freedom for the thought that we hate.”