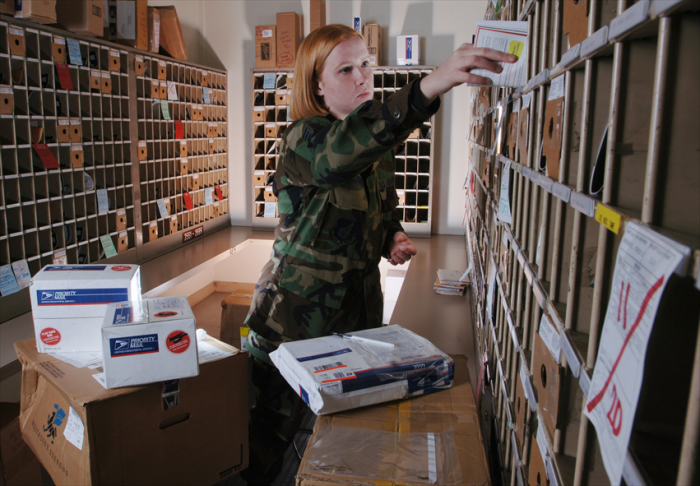 The Supreme Court established three different types of public forums in Perry Education Association v. Perry Local Educators’ Association (1983): traditional, limited and nonpublic. In the Perry case, a union argued that an Indiana school district was giving preferential treatment to a rival union by granting it exclusive rights to use the district's mail system. The Supreme Court ruled that the government mail system constituted a nonpublic forum, which allowed the school administration to have reasonable regulations on speech that did not discriminate based on viewpoint. Because differential access was “based upon the status of the respective unions,” there was no viewpoint discrimination. (Photo of government mailroom by the U.S Air Force.)

The public forum doctrine is an analytical tool used in First Amendment jurisprudence to determine the constitutionality of speech restrictions implemented on government property. Courts employ this doctrine to decide whether groups should have access to engage in expressive activities on such property.

Most scholars trace the lineage of the public forum doctrine to Justice Owen J. Roberts’s opinion in Hague v. Committee for Industrial Organization (1939), in which he wrote: “Wherever the title of streets and parks may rest, they have immemorially been held in trust for the use of the public and, time out of mind, have been used for purposes of assembly, communicating thoughts between citizens, and discussing public questions. Such use of the streets and public places has, from ancient times, been a part of the privileges, immunities, rights, and liberties of citizens.”

The term public forum was used frequently in the 1970s

The Supreme Court used the term public forum frequently in the 1970s. In Southeastern Promotions, Ltd. v. Conrad (1975), the Court ruled that city officials of Chattanooga, Tennessee, violated the First Amendment by prohibiting the production of the rock musical Hair in public facilities. The Court wrote that the city-owned theaters were “public forums designed for and dedicated to expressive activities.” In Greer v. Spock (1976), the Court rejected a First Amendment challenge to speech restrictions on a military base, writing “it is . . . the business of a military installation . . . to train soldiers, not to provide a public forum.”

In the 1980s, the Court articulated the contours of the public forum doctrine in Perry Education Association v. Perry Local Educators’ Association (1983). In Perry, Justice Byron R. White explained that there were three categories of government property for purposes of access for expressive activities.

In the first, “quintessential public forums, the government may not prohibit all communicative activity,” White wrote, explaining that content-based restrictions on speech were highly suspect.

The second category was designated, or limited, public forums. “Although a state is not required to indefinitely retain the open character of the facility, as long as it does so it is bound by the same standards as apply in a traditional public forum,” White explained. “Reasonable time, place, and manner regulations are permissible, and a content-based prohibition must be narrowly drawn to effectuate a compelling state interest.”

The third category was nonpublic forums. “In addition to time, place, and manner regulations, the state may reserve the forum for its intended purposes, communicative or otherwise, as long as the regulation on speech is reasonable and not an effort to suppress expression merely because public officials oppose the speaker’s view,” White explained.

In the Court’s forum-based approach, the government can impose reasonable time, place, and manner restrictions on speech in all three categories of property, but has limited ability to impose content-based restrictions on traditional or designated public forums. In determining whether a government property should be classified as a designated public forum, the courts examine the government’s “policy and practice” toward the property and whether the property is conducive to expressive activity, in order to discover the government’s intent, as explained in Cornelius v. NAACP Legal Defense and Educational Fund (1985).

In 2019, the 2nd and 4th Circuit Courts of Appeals ruled that government use of social media creates a designated public forum, and government officials can't engage in viewpoint discrimination by blocking comments. In a widely watched case, the 4th Circuit Court of Appeals in Knight First Amendment Institute v. Trump (2019), that President Trump violated the First Amendment by removing from the “interactive space” of his Twitter account several individuals who were very critical of him and his governmental policies.    The appeals court agreed with a lower court that the interactive space associated with Trump’s Twitter account “@realDonaldTrump” is a designated public forum and that blocking individuals because of their political expression constitutes viewpoint discrimination.

Commentators have criticized the public forum doctrine and its application by the courts. For example, law professors John Nowak and Dan Farber wrote in a 1984 article: “Classification of public places as various types of forums has only confused judicial opinions by diverting attention from the real first amendment issues involved in the cases.” The doctrine nonetheless remains a staple in modern First Amendment jurisprudence.

Whatever its shortcomings, the public forum doctrine has a pervasive presence in First Amendment free-speech law.  In the 2016-2017 term, the U.S. Supreme Court mentioned the concept of public forum in both Matal v. Tam (2017) and Packingham v. North Carolina (2017).