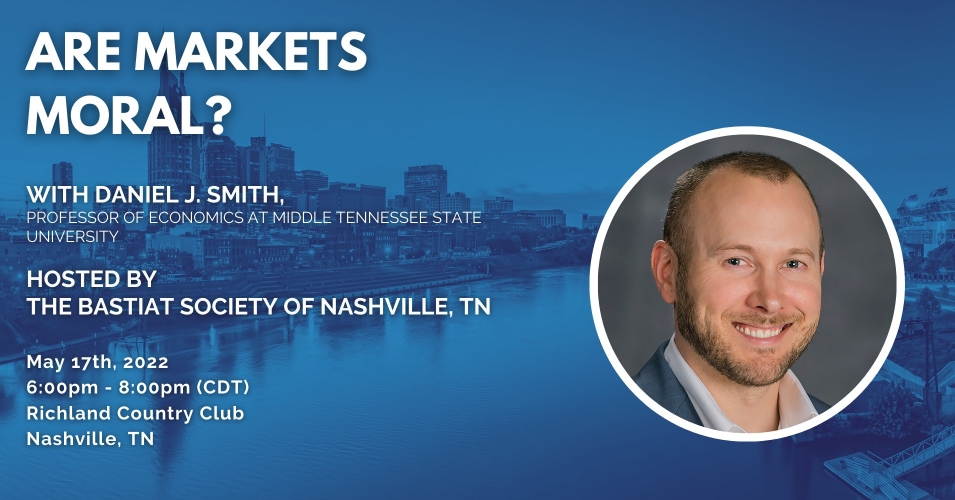 AIER’s Bastiat Society program in Nashville hosted an in-person event on Tuesday, May 17, 2022, at the Richland Country Club in Nashville with Daniel J. Smith, Professor of Economics at Middle Tennessee State University.

About the Event: Even the harshest critics of market societies begrudgingly recognize the efficiency of markets in generating unprecedented material abundance. Rather, modern critics argue that markets lead to unjust distributions of wealth by encouraging immoral behavior. In this talk, Smith argues that markets aren’t just more efficient; they are also moral and moralizing. The least-off in society are the primary beneficiaries of market institutions. By encouraging the adoption of commercial virtues, markets also foster morality and tolerance.

He is the co-author of Money and the Rule of Law: Generality and Predictability in Monetary Institutions (Cambridge University Press), written with Peter J. Boettke and Alexander W. Salter, and The Political Economy of Public Pensions (Cambridge University Press), written with Eileen Norcross. His research is published in academic journals, such as Public Choice, Economics of Governance, Constitutional Political Economy, and The Review of Austrian Economics, and in chapters in books published by Oxford University Press, Routledge, and Wiley-Blackwell. Daniel received his M.A. and Ph.D. in economics from George Mason University.

The Bastiat Society of Nashville’s speaker series is co-sponsored by The Political Economy Research Institute at MTSU.