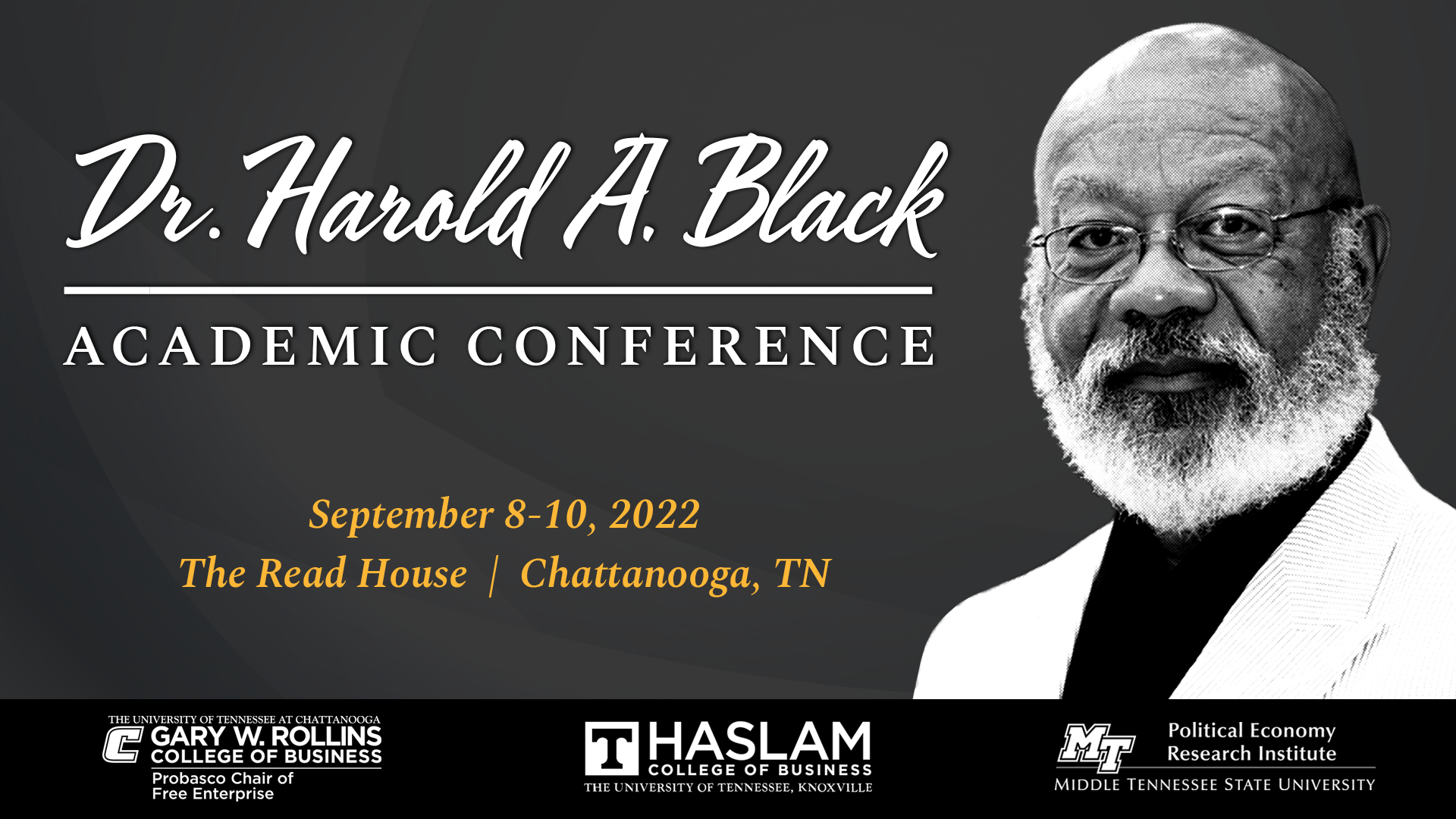 The conference will be in Chattanooga, TN, Sept. 8-10, 2022. We are now accepting paper proposals for this academic conference. We are particularly interested in papers that directly build on, examine, or extend the scholarship of Dr. Black.

For consideration, please submit the following via email to Daniel Smith at Daniel.Smith@MTSU.edu no later than June 30, 2022. Please include:

The authors of accepted papers will be notified by July 31, 2022. Conference papers will be due by Sept. 1, 2022. This conference will provide early-stage feedback, so substantially developed manuscripts are encouraged but not expected.

Research background: Harold Black’s research has deep connections to the literature in public choice on race and discrimination (Magness 2020). The primary emphasis of much of Black’s research is examining the prevalence and effects of discrimination in the financial industry. The perception that racial discrimination was systemic in financial markets motivated many regulations. Black’s seminal paper with Schweitzer and Mandel (1978) was one of the first econometric tests for bias in lending decisions and one of the first to employ logistic regression analysis in financial economics research. Black uses careful empirical work to provide a deeper understanding of when and where discrimination occurs in the financial industry, finding that, at least in some cases, regulations intended to help minority groups ended up harming them.

Black, Collins, and Cyree (1997) and Black, Robinson, and Schwitzer (2001), for instance, find that black-owned banks may themselves discriminate against African-American and low-income borrowers. His results suggest that aside from discrimination, alternative factors may be driving some of the statistical differentials in outcomes between races. In another example, Black (1999) argues that lending regulations in the Community Reinvestment Act and the Home Mortgage Disclosure Act could lead to financial institutions extending loans to financially unqualified borrowers to reduce their rejection rates of minority groups. But this may further damage the credit histories of individuals who already have poor credit histories in the event of default. Black, DeGennaro, and Boehm (2003), in the Journal of Banking and Finance, find that banning mortgage overages may discourage banks from lending to financially riskier clienteles and first-time customers (who often require additional time in the loan approval process), which may harm African Americans since African Americans tend to have lower credit scores than similarly situated whites and tend not to engage in bargaining or comparison shopping. They conclude that “Thus, policymakers and regulators should not strive to eliminate differential pricing but should concern themselves with those differences that are unrelated to market forces.” One of the essential insights that Black (1999) brings to bear on the discussion of racial discrimination in the financial industry is that increasing competition is often a driving force behind reducing the probability of bias.

About Dr. Black: Harold A. Black, a native of Atlanta, Georgia, received his undergraduate degree from the University of Georgia and his M.A. and Ph.D. degrees from the Ohio State University. He lectures, consults and publishes extensively in the areas of financial institutions and the monetary system. His articles have appeared in publications such as the American Economic Review, Journal of Money, Credit and Banking, Journal of Finance, Journal of Banking and Finance, Southern Economic Journal, Journal of Financial Research and the Journal of Monetary Economics. His consulting clients include some of the nation’s largest financial institutions.

Prior to joining the faculty at the University of Tennessee, he served on the faculties of American University, Howard University, the University of North Carolina – Chapel Hill, and the University of Florida. His government service includes being Deputy Director, Department of Economic Research and Analysis, Office of the Comptroller of the Currency, and Board Member, National Credit Union Administration. He has served as a Director and Chairman of the Nashville Branch of the Federal Reserve Bank of Atlanta. Among his honors, he is the recipient of the Department of Treasury’s Special Achievement Award, the National Urban League’s Outstanding Service Award, the Distinguished Alumnus Award from the University of Georgia’s College of Business Administration, the National Credit Union Administration’s Exceptional Service Award, and the Chancellor’s Award for Research Excellence at the University of Tennessee. Dr. Black was awarded the 2001 John B. Ross Teaching Award for excellence in teaching and is listed in Who’s Who Among Black Americans and Who’s Who Worldwide. Dr. Black writes occasional articles for the Knoxville Focus (knoxfocus.com) and blogs at haroldblackphd.com. The University of Georgia’s Terry College of Business has announced a named professorship in his honor and the University’s new dormitory bears his name. 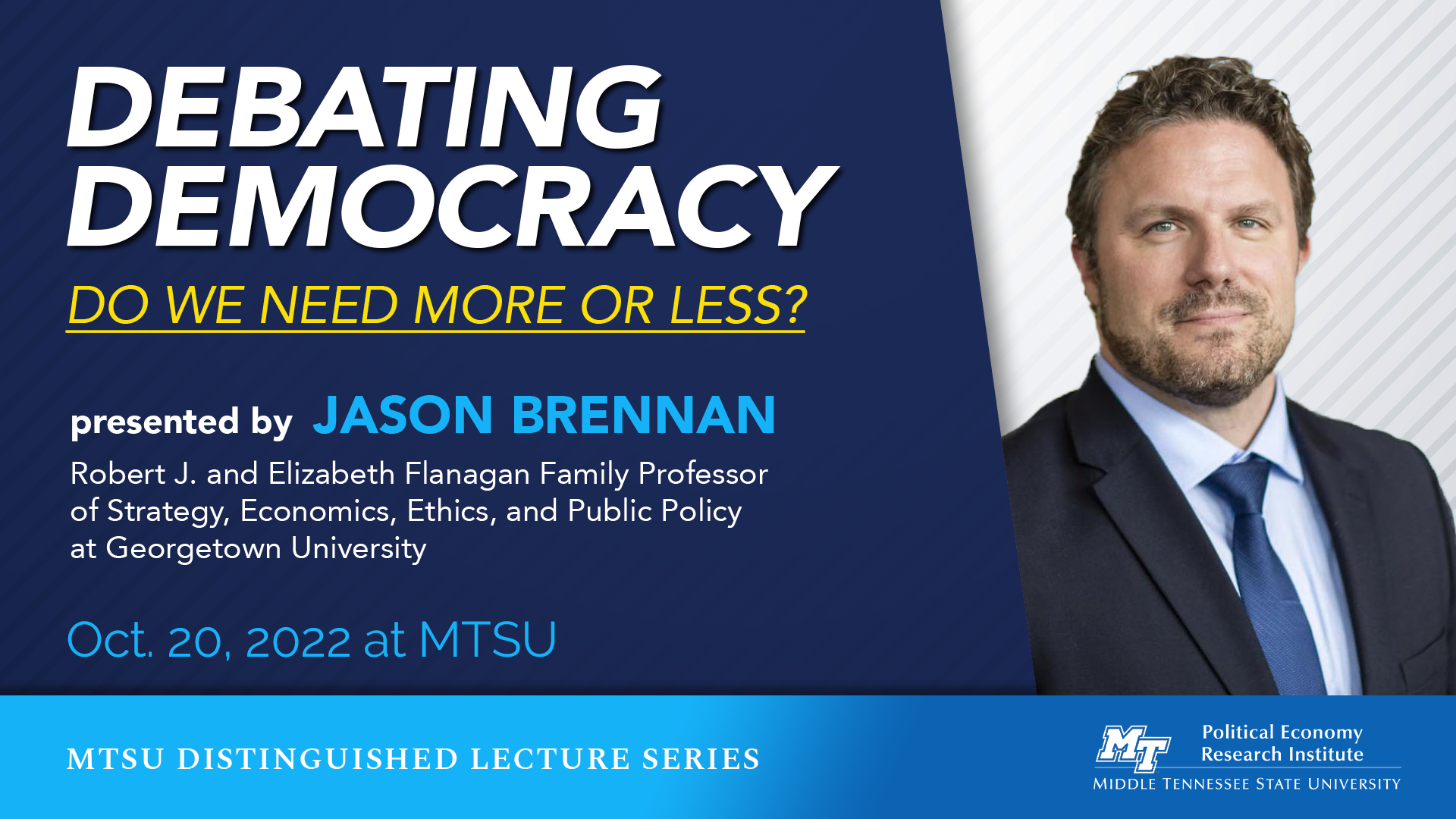 Debating Democracy: Do We Need More or Less?

About the Event: Democracy does not convert popular opinion into power. Instead, for most voters, politics is less about policy than it is about signaling their loyalty to their peer groups. Democracy makes people mean and stupid because being mean and stupid sends a strong signal of loyalty. Democracy may be the best system we have so far, but making democracy work means acknowledging its systematic flaws, keeping democracy in its place, and being willing to look for methods of overcoming its problems.

About the Speaker:  Jason Brennan, Ph.D., is Robert J. and Elizabeth Flanagan Family Professor of Strategy, Economics, Ethics, and Public Policy at the McDonough School of Business at Georgetown University. He specializes in politics, philosophy, and economics. He is the editor of Public Affairs Quarterly and an associate editor of Social Philosophy and Policy. He is currently overseeing a $2.1 million project on "Markets, Social Entrepreneurship, and Effective Altruism," funded by the Templeton Foundation. 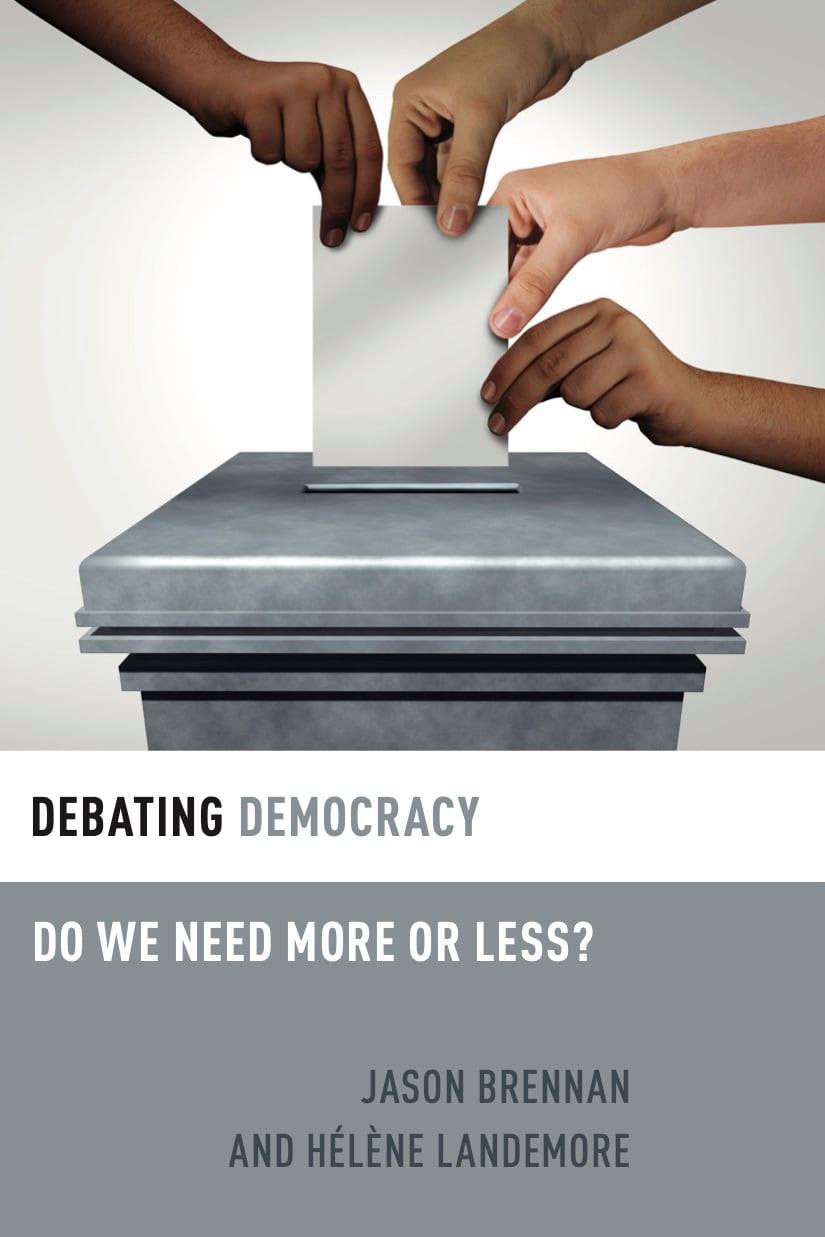