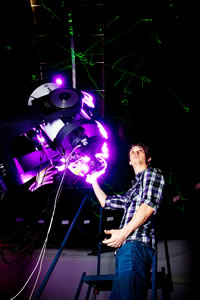 Daniel Bonior always underestimated his Uncle Scott, who was an engineer.

He figured that Uncle Scott and his son, who were always building remote control robots, were just geeky science nerds. And since Bonior's father and brother were also engineers, he knew who to stay away from unless he wanted to induce a yawning fit on purpose.

So, Bonior went off to MTSU to be a recording industry major, seemingly leaving science and anyone with a pocket protector far behind. Physics not only wasn't on his radar, it didn't really exist for Bonior. Until he took an astronomy class.

And that's all it took. Bonior switched to physics and then he started to see Uncle Scott, who worked for NASA, and the robots in a different light.

"Until I started taking physics, I never really made the connection that it takes a lot of knowledge to build those robots," Bonior said. "And now I have a bit more appreciation for everything he did. He had to understand and figure out a lot of things to do all that stuff."

And that's how Bonior figured out you can't do anything with physics – except for everything.

If you'd like to know how a physics principle let's you see music as well as hear it, check out http://www.youtube.com/watch?v=HpovwbPGEoo.