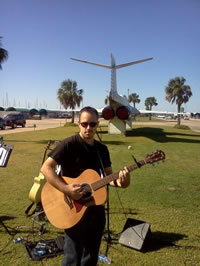 A funny thing happened to Jason Pappafotis on his way from the music industry to a career in developing mine warfare tactics for the Navy.

After 10 years of writing songs, playing in bands and producing CDs, Papafotis was ready for something a little more challenging and a lot more stable. While he had not taken advanced math or science in high school, Pappafotis made the transition by connecting physics to something he encountered in his everyday life – music and acoustics.

"I did a research project on superluminal sound with Dr. Bill Robertson," he explained. "This is sound that is faster than the speed of light. That appeared to be a violation of the basic laws of physics, so it caused quite a stir and that made it a lot of fun to do. It actually ended up being a phenomenon we were able to explain. There's a sense of responsibility and confidence that comes from doing that level of problem solving. I got a lot of confidence from being able to do that."

The research was published and Pappafotis and others were credited. Conducting research and getting published as an undergraduate can be an edge in getting into graduate school and landing a job. Pappafotis says it was the difference in getting his job as a physicist and tactician at a Naval base in Panama City, Fla.

Papafotis believes physics prepares students to tackle any problem in any field using everything from programming to math to logic. The skills Pappafotis used in his college research help him in his job as a civilian naval physicist and tactician everyday.

So, try physics at MTSU. Something funny might happen to you, too.

If you'd like to know how a physics principle let's you see music as well as hear it, check out http://www.youtube.com/watch?v=HpovwbPGEoo.