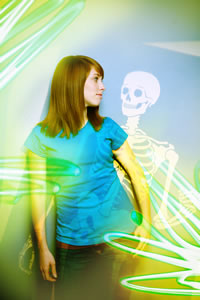 The secret of physics was revealed to Lauren Rigbsy by the common thread that runs through topics ranging from Bill Nye the Science Guy to Nova to neutrons to muons to medicine.

Rigsby, a 20-year-old MTSU junior physics major, said that physics attempts to explain what goes on in the world around us, and that means one question leads to another which leads to another. Events and subjects that initially appeared to be unrelated actually have connections.

She remembers being intrigued watching popular science television shows that featured the eggdrop experiment and astronomy. In sixth grade she read a section in her science text book about astronomy and neutron stars. And more recently, she talked to a student who conducted research at Vanderbilt concerning muons, particles created from collisions in the upper atmosphere.

"I didn't even know they existed – I had never heard of that," Rigsby said.

Rigsby, originally a biology major, planned to go to medical school until a math professor pointed out she might be bored because of the memorization and a lack of applied problem-solving she had grown accustomed to in physics. It wasn't too much of a leap to think that Rigsby might be interested in medical physics. Medical physicists work with oncologists to create treatment plans that ensure patients receive the right radiation dose in the correct area. Medical physicists also help develop better imaging techniques for mammography, CT, MRI and ultrasound.

"I knew that I always liked math and that I wanted to help people in a medical setting, but when I got into physics I realized how much I like applying math, logic and analytical thinking to everyday problems," Rigsby said.

Bill Nye would be proud.

If you want to check out something cool being done with muons, go to http://map.fnal.gov/muon-accelerator/research-goals.shtml.